Tweaked COVID boosters close but how much will they help? 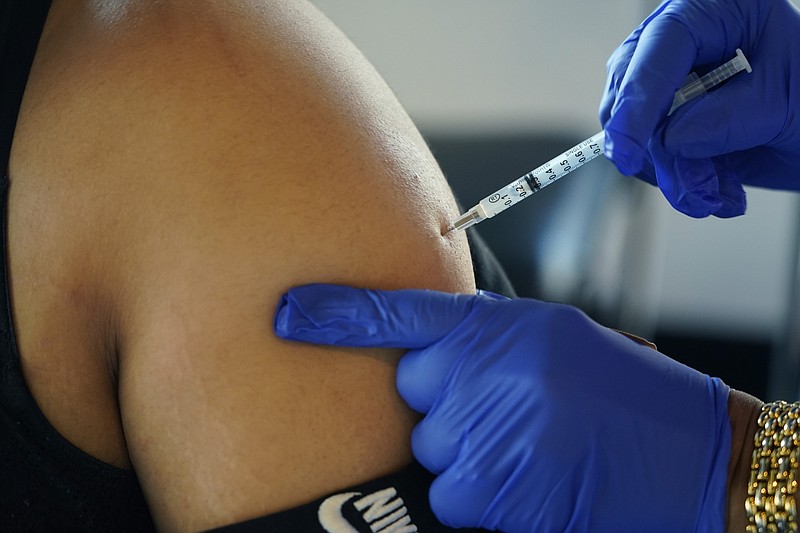 FILE - A Jackson, Miss., resident receives a Pfizer booster shot from a nurse at a vaccination site Tuesday, Feb. 8, 2022. In August 2022, Pfizer and Moderna both asked U.S. regulators to authorize modified versions of their booster vaccine &#x2014; shots that are half the original recipe and half protection against BA.4 and BA.5, the newest subtypes of the coronavirus omicron variant. (AP Photo/Rogelio V. Solis, File)

COVID-19 vaccines tweaked to better match today's omicron threat are expected to roll out in a few weeks but still up in the air is how much benefit the booster shots will offer, who should get one -- and how soon.

Pfizer and rival Moderna both asked U.S. regulators this week to authorize modified versions of their booster vaccine -- shots that are half the original recipe and half protection against BA.4 and BA.5, the newest versions of omicron.

The Food and Drug Administration ordered that recipe at the end of June, and now has to decide if this combination -- what scientists call a "bivalent vaccine" -- is ready.

The Biden administration hopes updated boosters could help blunt a winter COVID-19 surge in a population weary of the virus -- and of vaccinations. But while the first-ever modification to these vaccines is momentous, it's more of an expected next step -- like how flu vaccines get updated every year -- than a true next-generation shot.

"We need to give a clear, forward-looking set of expectations," said University of Pennsylvania immunologist E. John Wherry, who compares vaccine tweaks to periodically updating your computer software.

WHY DID FDA ORDER COMBO SHOTS?

BA.5 currently is causing nearly all COVID-19 infections in the U.S. and much of the world. Current COVID-19 vaccines match the coronavirus strain that circulated in early 2020. And while those vaccinations still offer strong protection against serious illness or death from COVID-19, there's little effectiveness against infection from the wildly mutated omicron family.

The gamble is that BA.5, or something similar, still will be circulating when cold weather hits so the combo shots will be a good match. (Vaccines target the spike protein that coat the coronavirus, and the BA.4 and BA.5 spikes are identical although those strains vary in other ways.)

HOW WERE THE MODIFIED SHOTS TESTED?

Pfizer and Moderna both studied an earlier tweak to their vaccines that targets the original omicron, called BA.1, that hit last winter, plus even earlier variants.

FDA will use data from human testing of the BA.1-tweaked doses plus mice tests of the BA.5-targeted version to decide if the newest update spurs virus-fighting antibodies enough to warrant another shot.

But data on the newest tweak will come later in the year, to help assess the value of modified shots. Moderna has started a human study of its BA.5 combo shot; Pfizer and its partner BioNTech expect to open a similar study soon.

WILL THEY WORK BETTER?

No one knows. Dr. Paul Offit, a vaccine expert at the Children's Hospital of Philadelphia and an FDA vaccine adviser, said the antibody jump from that earlier BA.1-tweaked candidate was "underwhelming."

"What the administration is asking us to do is to accept this bivalent vaccine as significantly better" than another dose of today's vaccine, he said. "It would be nice if there were data to support that."

Still, current shots are so outdated that an update makes sense, said Dr. Walter Orenstein of Emory University, a former vaccine director at the Centers for Disease Control and Prevention. While he'd like to see more data, he plans to get the new booster.

WHO SHOULD GET AN UPDATED SHOT?

That's up to the CDC, which called a meeting of its influential vaccine advisers next Thursday and Friday to help decide.

Pfizer wants to open its updated boosters to everyone 12 and older who's already had a primary series of today's vaccine, while Moderna has applied only for adult use. CDC will determine if people at highest risk should go first.

A government rollout plan anticipates that people who've already gotten their initial vaccinations would qualify for one of the new combination shots, regardless of how many boosters they've already had.

WHEN SHOULD THOSE ELIGIBLE GET THE NEW BOOSTER?

Again, the CDC will weigh in, after considering how many doses will be available in early September versus later in the fall. The Biden administration has purchased more than 170 million doses.

But immunologists caution not to race out for a new shot if you recently had a dose of the original vaccine or an infection. That's because if you still have a lot of antibodies in your bloodstream, they'll recognize and attack the brand new antibodies that vaccine dose is supposed to produce.

So if you already got a booster in July or August and then seek the new combo shot in September, "you'll receive very little additional boosting from that," Wherry said. He recommends waiting four to six months.

WILL PEOPLE ROLL UP THEIR SLEEVES AGAIN?

Americans have been reluctant to keep up with COVID-19 vaccinations. While three-quarters of Americans 12 and older have gotten their initial vaccinations, only half got a first booster shot -- deemed crucial for the best protection against variants. And just a third of people 50 and older who were advised to get a second booster when omicron arrived did so.

Print Headline: Tweaked COVID boosters close but how much will they help?