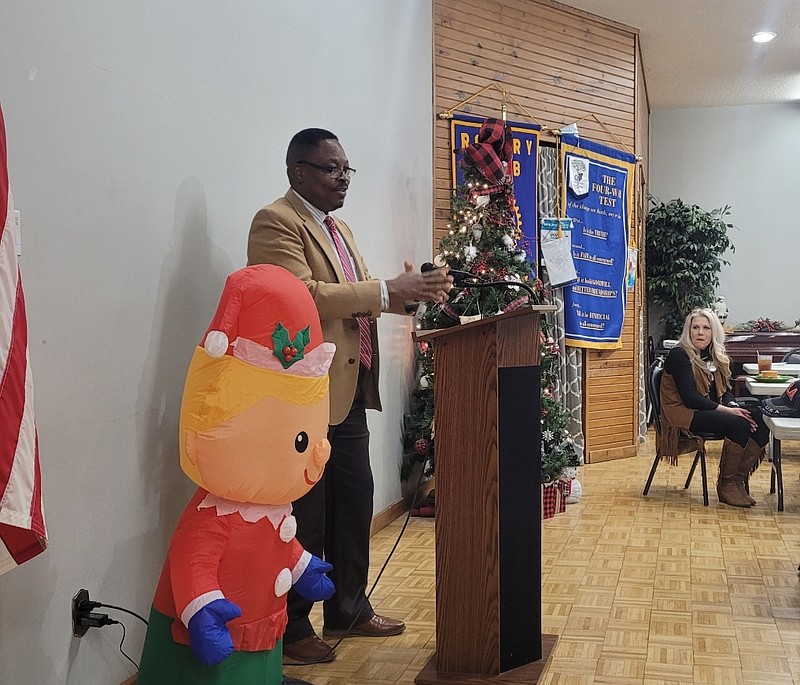 Dr. Cimenga Tshibaka, a new general surgeon at Ouachita County Medical Center, was the speaker at the Camden Lions Club's meeting Wednesday. He spoke about his background and his time in south Arkansas.

Tshibaka was introduced by Joe Michael Givens, corporate compliance officer for OCMC, but before the introduction, Givens gave a brief update on OCMC.

Givens stated, "Times are hard, as in every industry. But health care is being hit hard."

Givens stated that for every $10,000 charged in health care, Medicare or Medicaid recipients pay 19.7% of the bill and Blue Cross, Blue Shield and other commercial insurance owners pays 30%.

He stressed the importance of OCMC stating, "Without the hospital we would be a medical desert in Camden, Arkansas... Imagine your wife, daughter or sister having to go to El Dorado, Texarkana, Pine Bluff or Little Rock to have a baby. Back in the spring, Magnolia called our hospital and said 'For two weeks we will stop offering obstetrics. Can Camden handle it?' We gave the nod. They never turned it back on."

"Back in the spring we wanted to open our basic lines of business...We knew general surgery was an issue. Dr. Mark Shina retired due to health reasons. Dr. Arnold moved to another town in the Delta region," he said.

A major reason for Tshibaka came to South Arkansas was for his wife, Victory Tshibaka, who enjoys the warmer climate than their then-home of Pennsylvania, Givens said.

"I came to this country as the son of an immigrant as a teenager. I had just finished high school. So I did all of my training in the United States. I trained mainly at the University of Maryland," Tshibaka said.

Dr. Tshibaka said as one of eight siblings, four of whom were in college at the same time, his father wanted him to stay in state to avoid out of state tuition.

Tshibaka said he was surprised by residents having to travel to Little Rock in some cases for medical procedures.

"There are some procedures not being done here and I didn't understand why. They are reasonably simple procedures to do. Sometimes we have to send patients out of this community to drive two hours away to have some test done. That's just disconcerting to me," he said.

He is training his staff in a variety of procedures to ease the burden of patients having to drive to Little Rock, he said.

As a man of faith, Tshibaka said, he feels God drew him to Camden.

He also stated that a lack of specialists was one of the biggest problems facing South Arkansas.

"Based on what I've seen so far, it's the lack of specialists. There are no vascular surgeons. I had someone come in for a general surgical procedure, a hernia, a hernia he had for seven or eight years... When I assessed him, he had an aneurysm, a very large aneurysm. Almost 8 centimeters," he said. "They're supposed to be fixed when they are 5.7 centimeters, because we have shown that anything above 5.7 centimeters, the likelihood of rupture is high."

Dr. Tshibaka said that the man did not meet the criteria for stinting.

"I couldn't find anybody here to do an open procedure on him," he said. "They had to go to Little Rock for some simple tests."