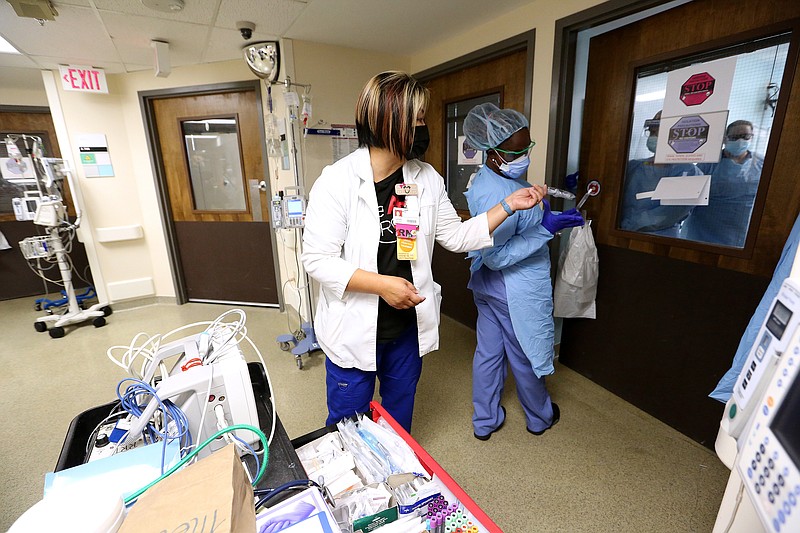 Nurses Kia Kandlbinder (left) and Brionna Rivers hand equipment through the door to fellow nurses in one of the Covid wards at University of Arkansas for Medical Science on Thursday, July 22, 2021, in Little Rock. .(Arkansas Democrat-Gazette/Thomas Metthe)

Arkansas' new coronavirus case numbers continued falling Wednesday, while the number of people hospitalized in the state with the virus fell for the second day in a row.

The state's death toll from the virus, as tracked by the Department of Health, rose by 23, to 9,690.

In a tweet, Gov. Asa Hutchinson highlighted a continuing decline in the number of the state's cases that are considered active, representing people who have tested positive and have not yet recovered or died, as well as the percentage of the state's coronavirus tests that are positive.

"We have over 30,000 fewer active cases than last Wednesday, and hospitalizations continue to fall," Hutchinson said.

"Our percent positivity has dropped by more than 10 percentage points since the middle of January, and I'm hopeful we'll see these trends continue."

The state's count of cases rose by 4,614, which was down by 23 from the daily increase a day earlier and by more than 1,900 from the one the previous Wednesday.

After falling by four Tuesday, the number of people hospitalized in the state with covid-19 fell by 36, to 1,675, its lowest level in more than a week.

During the current wave of infections driven by the omicron variant, the total number of hospitalized covid-19 patients peaked at a record 1,819 on Jan. 26.

Despite the drop since then, the number remained Wednesday above the peaks it reached during previous surges: 1,459 in August and 1,371 in January 2021.

While the total number of hospitalized covid-19 patients fell Wednesday, the numbers who were on ventilators and in intensive care both rose after dropping a day earlier.

The number who were on ventilators rose by four, to 246.

The number who were in intensive care rose by the same number, to 490.

Since Jan. 22, the number in intensive care has been above its peak of 458 last winter, although it remains below the record high of 558 it reached in the summer of last year.

The number of covid-19 patients on ventilators peaked at 388 in the summer of last year and at 268 last winter.

At hospitals across the state, just 22 intensive care unit beds were unoccupied Wednesday, down from 26 a day earlier.

People with covid-19 continued to make up about 40% of all the state's patients in intensive care.

The average daily increase in the state's case count over a rolling seven-day period fell Wednesday to 4,232, its lowest level in almost a month and down from an all-time high of 9,122 the week ending Jan. 16.

With recoveries and deaths continuing to outpace new cases, the number of cases in the state that were considered active fell by 3,681, to 53,711.

Except for Saturday and Sunday, when the Health Department didn't release new numbers as it switched to a new data system, the reported total has fallen every day since it reached a record 102,576 on Jan. 22.

Dr. Jennifer Dillaha, the Health Department's chief medical officer, said 26.4% of the state's coronavirus tests were positive over the seven-day span ending Tuesday, down from the 27.4% that was initially reported for the week ending Monday and a peak of more than 36% in mid-January.

Hutchinson has said he wants to keep the percentage below 10%, but it has been higher than that since the week ending Dec. 22.

Already dealing with staff absences because of covid-19 and near-record numbers of coronavirus patients, hospitals Wednesday were also preparing for snow and freezing rain that was expected to make travel difficult in much of the state today.

"We have cots," said Leslie Taylor, a spokeswoman for the University of Arkansas for Medical Sciences Medical Center.

"We're arranging to have employees who want to spend the night to make sure that they're here for their shift tomorrow to have meal tickets, and they can take showers in our fitness center.

"Some prefer to go home, but if the weather's bad, folks still have to come to work because it's a 24-hour operation, and it really doesn't matter what the weather looks like outside."

However, because of the expected weather, she said the hospital's drive-thru testing clinic and vaccination clinic will be closed today and Friday.

She said the hospital had 71 covid-19 patients Wednesday, down from a record 99 just over week earlier.

Since then, however, the number of patients who were in intensive care has risen from 16 to 24, while the number who were on ventilators went up from seven to 16.

"The acuity that we're seeing is, with more ICU patients, they're sicker and the acuity is much higher, and these patients seem to be suffering more lung issues, which is more along the lines of what we saw with the delta variant, so there is some concern that this could be more delta cases that we're seeing," Taylor said.

She said 28 of the 71 patients were fully vaccinated. Of those in intensive care, all were unvaccinated or had other underlying health conditions, she said.

Out of UAMS' 11,000 employees, she said, 302 were out for reasons related to covid-19, which was down from as many as 800 during the height of the omicron surge last month.

The employees out Wednesday included 148, of whom 90 were health care workers, who had tested positive for covid-19, Taylor said.

In Jonesboro, St. Bernards Medical Center had 118 covid-19 patients Wednesday, which was down from a record 128 on Jan. 27 but still above the levels it reached last winter and in the summer of last year, spokesman Mitchell Nail said.

The patients Wednesday included 24 who were in intensive care and 10 who were on ventilators.

About 40% of the 118 patients had been fully vaccinated, he said.

Meanwhile, he said the hospital has been seeing a drop in demand for testing, prompting it to scale back a free drive-thru clinic for rapid covid-19 tests for people with symptoms to just two days this week, instead of five.

Baptist Health's 11 hospitals around the state had a total of 351 covid-19 patients Wednesday, down from 359 a day earlier and a record 368 on Jan. 25, spokeswoman Cara Wade said.

The number of the health system's virus patients who were in intensive care, however, rose Wednesday by four, to 105, while the number who were on ventilators went up by two, to 80.

At its hospitals in Little Rock and Springdale, Arkansas Children's Hospital had 35 covid-19 patients Wednesday, up from 34 a day earlier but still down from a record 46 on Jan. 19, spokeswoman Hilary DeMillo said.

She said the patients Wednesday included seven who were in intensive care and two on ventilators.

More than half of the 35 patients were at least 5 years old, making them eligible for vaccination, but only five had been fully immunized, she said.

In a weekly report, the Arkansas Center for Health Improvement said that, for the third week in a row, all 234 of the state's "contiguous public school districts" had at least 50 or more new cases per 10,000 residents over a recent-two week period.

The cases used to calculate the rates for each district include those among residents living within the district, excluding incarcerated people, and residents of nursing homes and human development centers.

The other is the Bentonville School District, where 62% of residents are fully vaccinated.

Twenty-three other districts have vaccination rates of at least 50%, according to the center.

Dillaha said the number of covid-19 patients in the state's hospitals could go up from one day to the next, but she expects the overall trend to be downward for while.

Adding to the improving outlook for hospitals, the department reported "minimal" flu activity in the state last week based on visits to doctor's offices from people with flu-like illness.

That was down from a "moderate" level of activity a week earlier.

"We're moving in the right direction with flu," Dillaha said.

"I hope we can keep that up. Typically we peak about this time of year, so maybe we have hit our peak, and it's going to be a mild flu season after all."

After an unusually low number of flu cases last winter, health officials had expressed fears that the state would see a resurgence this winter at the same time covid-19 cases were spiking.

Dillaha said precautions meant to prevent the spread of covid-19 in schools may have kept that from happening.

"It's school kids who I think are the most efficient spreaders of flu in our communities, so it's very possible that the spread of flu was lessened because of the efforts taken to lessen the spread of covid-19 in our [kindergarten] through 12 schools," she said.

In part because of school closures, she said she expects the snow and ice this week to contribute to a further reduction in the state's new covid-19 cases.

"We're anticipating it will be similar to bad weather that we had last year, often called 'snowmageddon,'" Dillaha said, referring to a series of snowstorms that hit the state in February.

"It actually served to diminish the spread of covid-19. We saw some lower cases after that period.

"We're hoping that if people are staying home, and not mixing households very much during the next few days, that could also benefit us by decreasing the spread of covid-19 in our communities."

Dillaha said one of the deaths reported Wednesday happened in August, and the rest occurred within the past month.

The number of people who have ever been hospitalized in the state with covid-19 grew Wednesday by 225, to 33,612.

The number of the state's virus patients who have ever been on ventilators rose by 16, to 3,436.

Already at its lowest point since the Health Department started reporting daily numbers in January 2021, the pace of reported vaccinations in the state continued slowing Wednesday.

The department's tally of doses that had been administered rose by 4,291, which was down by 563 compared with the increase a week earlier.

Booster shots made up 41% of the most recent increase.

The count of first doses rose by 1,314, which was smaller by 31 than the increase in first doses a week earlier.

The average number of total doses administered each day over a rolling seven-day period fell Wednesday to 3,757, which was down from almost 4,700 a day a week earlier and more than 12,000 a day in early December.

According to the U.S. Centers for Disease Control and Prevention, the percentage of Arkansans who had received at least one dose remained Wednesday at 65%, and the percentage who had been fully vaccinated remained at 52.7%.

The percentage of fully vaccinated Arkansans who had received booster doses remained at 36.3%.

Among the states and District of Columbia, Arkansas continued to rank 37th in the percentage of its residents who had received at least one dose and 46th, ahead of only Idaho, Louisiana, Mississippi, Wyoming and Alabama, in the percentage who were fully vaccinated.

Nationally, 75.4% of people had received at least one dose as of Wednesday, and 63.9% were fully vaccinated.

Of the fully vaccinated population nationally, 41.8% had received booster doses.