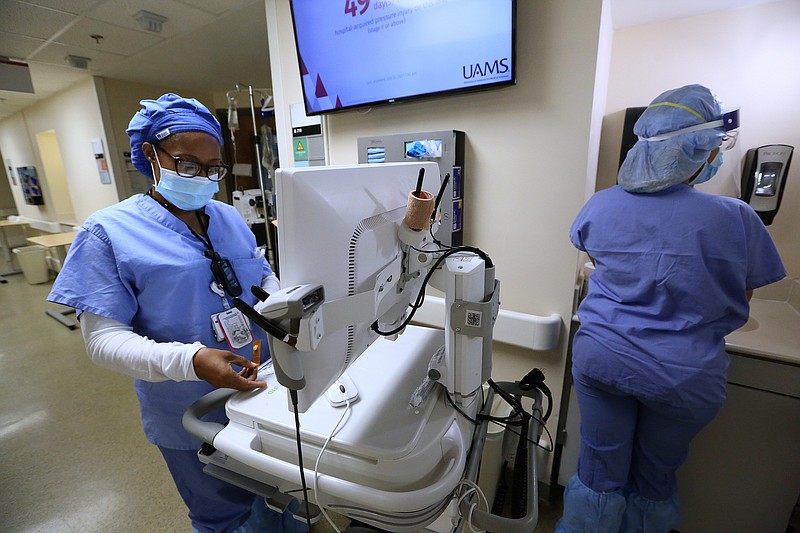 Nurse Takela Gardner looks over a charts before making rounds in one of the Covid wards at University of Arkansas for Medical Science on Thursday, July 22, 2021, in Little Rock. .(Arkansas Democrat-Gazette/Thomas Metthe)

Dropping for the fourth day in a row, the number of people hospitalized with covid-19 in Arkansas fell to its lowest level in more than two weeks Friday as the state's new case numbers also continued to decline.

Likely reflecting reduced testing because of the winter storm that hit the state this week, the state's count of cases rose by 1,507, the smallest daily increase since December.

Arkansas' death toll from the virus, as tracked by the Department of Health, rose by 29, to 9,762.

"The level of COVID hospitalizations is our best indication of the trend," Gov. Asa Hutchinson said in a tweet.

"We're moving in the right direction with active cases and hospitalizations declining. Over 80% of hospitalizations & deaths are of those who have not been fully vaccinated. Boosters add the best protection."

While down from its all-time high of 1,819 on Jan. 26, the number of covid-19 patients in the state's hospitals remained above its previous peaks last winter and during the delta surge last summer.

The numbers of the state's virus patients who were on ventilators and in intensive care fell Friday for the second day in a row.

The number on ventilators fell by five, to 225.

It was the first time since Jan. 21 that the number in intensive care had been below its January 2021 peak of 458.

[VIRUS TESTING: Click here for how, where to get free at-home covid tests in Arkansas » arkansasonline.com/athome]

During the current wave of infections from the omicron variant, the number in intensive care hasn't risen above the record high of 558 it reached last summer.

The number of covid-19 patients on ventilators peaked at 388 last summer and at 268 last winter.

"Of course, the total [of new] cases are down, and a lot of that could be due to lack of testing due to the weather, but what's really pleasing to see is the decrease in the hospitalizations."

Also, after rising to an all-time high of more than 36% in mid-January, the percentage of the state's coronavirus tests that are positive over a rolling seven-day period has been falling, indicating that the downward trend in cases isn't solely because of a reduction in testing.

Because it can take weeks or months for deaths to be reported to the Health Department, she said she expects the daily increase in the state's death toll to continue to be elevated for another week or so.

Health Department spokeswoman Danyelle McNeill said 26 of the deaths reported Friday happened within the past month.

Of the others, two happened in August and one occurred in December.

The average daily increase in the state's case count over a rolling seven-day period fell Friday to 3,381, its lowest level since the week ending Jan. 3.

With recoveries and deaths outpacing new cases, the number of cases in the state that were considered active fell by 5,286, to 44,478, the lowest number since Jan. 6.

After being closed because of the weather Thursday and Friday, the University of Arkansas for Medical Sciences' drive-thru testing clinic in Little Rock was scheduled to reopen at 8 a.m. today, UAMS spokeswoman Leslie Taylor said.

But she said the university's vaccination clinic on Monroe Street in Little Rock, which had also been closed for two days, will no longer be open on Saturdays starting today.

"We don't have as many people coming for vaccinations, so we're just doing it Monday through Friday," Taylor said.

She said UAMS Medical Center had 73 covid-19 patients Friday, up from 71 a day earlier.

"Unfortunately we did have another patient pass away," Taylor said.

The number of patients who were in intensive care fell by one, to 23. The number who were on ventilators fell by two, to 15.

Taylor said 25 of the 73 patients had been fully vaccinated.

"The biggest challenge is having enough ICU beds with all the other patients that we have," she said.

The number of employees who had tested positive fell from 153 as of Thursday to 137.

Those employees Friday included 81 health care workers, down from 92 a day earlier.

At its 11 hospitals across the state, Baptist Health had 361 covid-19 patients Friday, up from 355 a day earlier and approaching the record 368 virus patients in the health system's hospitals on Jan. 25, spokeswoman Cara Wade said in an email.

The patients Friday included 101 who were in intensive care, down from 108 a day earlier.

The number who were on ventilators fell from 71 as of Thursday to 68.

"Demand for COVID-19 testing increased today over yesterday at the sites that were offering the service, though we definitely aren't seeing the traffic we had before the inclement weather," Wade said Friday.

"The same is true for our clinics that were open and offering vaccinations today. Our drive-thru testing at Baptist Health Medical Center-Little Rock tested 24 people on Thursday and today we tested 113 people. Our highest day was Jan. 5 with 1,726."

Arkansas Children's outpatient clinics were closed because of the weather for a second day Friday, with many in-person appointments converted to video visits, spokeswoman Hilary DeMillo said.

The patients Friday included three who were in intensive care and one on a ventilator.

More than half of the 31 patients were at least 5 years old, making them eligible for vaccination, but only seven had been fully immunized, DeMillo said.

The number of people who have ever been hospitalized in the state with covid-19 grew Friday by 15, to 33,730.

The number of the state's virus patients who have ever been on ventilators rose by five, to 3,448.

As with the state's new cases, closures and treacherous roads likely contributed to a reduction in the state's reported vaccinations, which had already fallen to their lowest level since the Health Department started reporting daily numbers in January 2021.

The department's tally of doses that had been administered rose Friday by 3,364, which was down by more than 1,900 from the daily increase the previous Friday.

Booster shots made up almost 51% of the most recent increase.

The count of first doses rose by 623, which was less than half the size of the increase in first doses a week earlier.

The average number of total doses administered each day over a rolling seven-day period fell to 3,242, which was down from an average of more than 4,600 a day a week earlier and more than 12,000 a day in early December.

The average for first doses fell to 874.

According to the U.S. Centers for Disease Control and Prevention, 65.2% of Arkansans had received at least one dose as of Friday, up from 65% a day earlier.

The percentage who had been fully vaccinated rose from 52.7% as of Thursday to 52.9%.

Of those who had been fully vaccinated, 36.6% had received booster doses as of Friday, up from 36.3% a day earlier.

In the percentage who were fully vaccinated, it went from 46th to roughly tied with Tennessee for 45th, ahead of Idaho, Louisiana, Mississippi, Wyoming and Alabama.

Nationally, 75.5% of people had received at least one dose, and 64% were fully vaccinated.

Of the fully vaccinated population nationally, 42% had received booster doses.