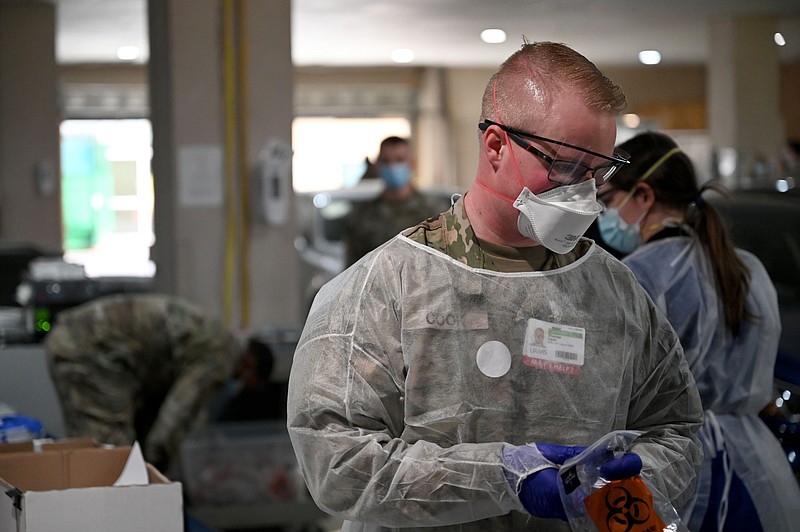 Thomas Cook, with the Arkansas Army National Guard, administers a test for COVID-19 at a drive-thru screening site at UAMS on Tuesday, Jan. 4, 2022. Gov. Asa Hutchinson visited the medical campus to welcome 12 Arkansas National Guard soldiers who are helping with the demand at the drive-thru screening site. See more photos at arkansasonline.com/15uams/..(Arkansas Democrat-Gazette/Stephen Swofford)

Arkansas' cumulative count of coronavirus cases since the start of the pandemic topped 800,000 Wednesday even as its numbers of hospitalized covid-19 patients and new cases continued to decline from the levels they reached last month.

The case count rose by 2,337, an increase that was just over half the size of the one the previous Wednesday.

Dropping for the ninth day in a row, the number of people hospitalized in the state with covid-19 fell by 36, to 1,323.

The state's death toll from the virus, as tracked by the Arkansas Department of Health, rose by 32, to 9,927.

He said he would discuss the state's coronavirus numbers further at his weekly news conference at the state Capitol today.

The count as of Wednesday represents more than 26% of the state's population, although people can be counted more than once if they are infected multiple times.

The omicron surge that began in December accounts for about 30% of the cases, including more than 220,000 that were added in January alone.

"Many people have done very well with covid-19," she said. "They've had mild illness and little side effects, but many have suffered severe health consequences, and of course very soon we'll hit the 10,000 mark for total deaths."

Continuing a slowdown since the omicron surge peaked last month, the average daily increase in the state's case count over a rolling seven-day period fell Wednesday to 2,052, its lowest level since the week ending Dec. 29.

With recoveries and deaths outpacing new cases, the number of cases in the state that were considered active fell by 3,238, to 27,064.

In another sign of the slowing spread of the virus, Dillaha said 18.9% of the state's coronavirus tests were positive over the seven-day span ending Tuesday, the first time it had been below 20% since the week ending Dec. 28.

Falling for the fourth straight day, the number of the state's virus patients who were on ventilators dropped Wednesday by five, to 191.

The University of Arkansas for Medical Sciences Medical Center had 59 covid-19 patients Wednesday, down from 64 Tuesday and a record 99 on Jan. 25, spokeswoman Leslie Taylor said.

"This is still a high number of patients, but it is going down," she said.

The patients Wednesday included 16 who were in intensive care and 11 who were on ventilators.

Twenty-four of the 59 patients had been fully vaccinated, Taylor said.

Those employees Wednesday included 87 who had tested positive for the virus. Of those, 51 were health care workers.

At its drive-thru testing clinic in Little Rock, the hospital tested 255 people Tuesday, down from 318 Monday and an average of more than 800 a day in early January.

Baptist Health's 11 hospitals around the state had 292 covid-19 patients Wednesday, down from 301 a day earlier and a record 368 on Jan. 25, spokeswoman Cara Wade said in an email.

She said the patients Wednesday included 80 who were in intensive care and 57 on ventilators.

She said an average of 209 people a day had been tested over the past three days at Baptist Health Medical Center-Little Rock's drive-thru testing site, down from a record 1,726 on Jan. 5.

"We are also pleased that more of our employees have been able to return to work," Wade said.

"Today, we only have 55 of our approximately 11,000 Baptist Health employees out due to reasons related to COVID-19. This is compared to nearly 600 employees out last month."

At its hospitals in Little Rock and Springdale, Arkansas Children's had 19 covid-19 patients Wednesday, down from 23 a day earlier and a record of 46 on Jan. 19, spokeswoman Hilary DeMillo said.

She said the patients Wednesday included two who were in intensive care and one who was on a ventilator.

More than half of the 19 patients were at least 5 years old, making them eligible for vaccination, but only two had been fully immunized, DeMillo said.

As of Tuesday, people who had received booster shots made up just 4.3% of the state's cases, 4.2% of its covid-19 hospitalizations and 2.2% of its deaths from the virus since Dec. 1, Dillaha said Wednesday.

Those percentages had increased slightly from Feb. 3, when people who had received boosters made up 4% of the cases, 3.6% of the hospitalizations and 2.1% of the deaths.

Still the percentages remained small compared with the 19.5% of Arkansans who, according to U.S. Centers for Disease Control and Prevention data, had been fully vaccinated and boosted as of Wednesday.

By comparison, people who had not been fully vaccinated made up 47% of Arkansas' population as of Wednesday. From Dec. 1 through Tuesday, they accounted for 61.1% of the state's cases, 66.7% of its covid-19 hospitalizations and 72.3% of its deaths from the virus.

Representing 33.5% of the state's population, people who had been fully vaccinated, but who had not received boosters, made up 33.6% of the cases, 29.2% of the hospitalizations and 25.2% of the deaths.

"The people who get boosted, their rate of becoming a case is so low," Dillaha said.

Adding to the improving outlook for the state's hospital capacity, a Health Department report released Wednesday showed that the state continued to have "minimal" flu activity last week, based on visits to doctor's offices from people with flu-like illness.

"I think we have peaked in flu," Dillaha said.

After an unusually low number of flu cases last winter, health officials had expressed fears that the state would see a resurgence this winter at the same time covid-19 cases were spiking.

Dillaha said the toll from the current flu season could continue to rise, especially since deaths sometimes aren't reported until weeks or months after they occur.

"I would call it a mild flu season," Dillaha said. "It was not as mild as last year."

Pulaski County had the most new coronavirus cases, 242, Wednesday, followed by Washington County with 171 and White County with 141.

Dillaha said all of the covid-19 deaths reported Wednesday happened within the past month.

The number of people who have ever been hospitalized in the state with covid-19 grew Wednesday by 202, to 34,452.

The number of the state's virus patients who have ever been on ventilators rose by 14, to 3,496.

The Health Department's count of covid-19 vaccine doses that had been administered rose by 2,895, which was smaller by almost 1,400 than the daily increase a week earlier.

Booster shots made up almost 33% of the most recent increase.

The count of first doses rose by 959, which was smaller by 355 than the increase in first doses a week earlier.

Already at its lowest level since the Health Department started regularly releasing daily vaccination numbers in January 2021, the average number of total doses administered each day over a rolling seven-day period fell to 2,421, which was down from more than 3,700 a day a week earlier and more than 12,000 a day in early December.

The average for first doses fell to 693, which was also a new low.

According to the CDC, 65.3% of Arkansans had received at least one vaccine dose as of Wednesday, up from 65.2% a day earlier.

The percentage who had been fully vaccinated rose from 52.9% as of Tuesday to 53%.

Of those who had been fully vaccinated, 36.9% had received booster shots as of Wednesday, up from 36.8% a day earlier.

In the percentage who were fully vaccinated, it rose from 46th to being roughly tied with Tennessee for 45th, ahead of Idaho, Louisiana, Mississippi, Wyoming and Alabama.

Nationally, 75.7% of people had received at least one dose as of Wednesday, and 64.2% were fully vaccinated.

Of the fully vaccinated population nationally, 42.5% had received booster doses.