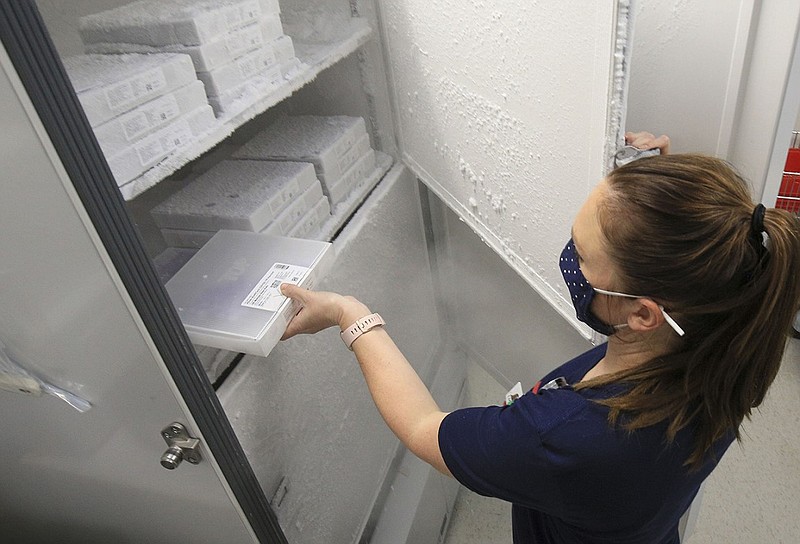 Sara Winningham, a staff pharmacist at the Rockefeller Cancer Institute at the University of Arkansas for Medical Sciences in Little Rock, prepares vials of the Pfizer vaccine for a vaccination clinic in this May 7, 2021, file photo. (Arkansas Democrat-Gazette/Staton Breidenthal)

Arkansas posted a slight uptick in new coronavirus cases Friday even as the number of people hospitalized in the state with the virus fell for the 11th day in a row.

The state's death toll from the virus, as tracked by the Arkansas Department of Health, rose by 40, the second-largest single-day increase since the start of the omicron surge in December.

"Our seven-day average of new cases is now at the level it was in late December as the Omicron surge began," Gov. Asa Hutchinson said in a tweet.

"Regrettably, another 40 Arkansans have lost their lives due to COVID. 82% of COVID deaths are unvaccinated, so talk to your trusted health care advisor about the vaccine."

Also Friday, the state Department of Corrections announced that an "essential movement plan," in place since Dec. 31 due to the omicron surge, will be lifted Monday, with in-person visits at prisons resuming March 1.

The state Parole Board will also resume allowing supporters to join inmates in person at parole hearings, the department announced.

Meanwhile, a spokesman for the state Department of Human Services said 135 employees at the Conway Human Development Center, representing more than 15% of the center's total workforce, had been approved for religious or medical exemptions from a federal vaccine requirement being phased in starting Monday.

The state's case count rose by 1,947, an increase that was larger by 122 than the one Thursday and by 440 than the one the previous Friday, when many testing sites were closed because of icy roads.

Dr. Jennifer Dillaha, the Health Department's chief medical officer, said 37 of the deaths reported Friday happened within the past month. Of the others, one happened in November and two were in December, she said.

Partly because of delays in reporting, the number of deaths reported each day is likely to remain elevated "for a while because of the high number of cases that we had for so long," Dillaha said.

"A fair number of them probably didn't make it," she said.

She said it was "hard to read much into" the uptick in cases, especially since the increase a week earlier was likely depressed by a slowdown in testing and reporting because of the winter storm that hit the state.

But she said the percentage of the state's tests that are positive is often an early indicator of how cases are trending.

For the seven-day span ending Thursday, the percentage was 17.5%, up from the 17.4% that was initially reported for the week ending Wednesday.

The percentage for that week, however, later rose to 18.7% after more test results came in.

"The positivity rate still is probably trending down, so that makes me think that some of this might be variation you see at different days of the week and not put too much stock into one day," Dillaha said.

The average daily increase in the state's case count over a rolling seven-day period rose Friday to 1,774, which was still down from an average of almost 3,400 a day a week earlier and an all-time high of 9,122 a day the week ending Jan. 16.

With recoveries and deaths continuing to outpace new cases, the number of cases in the state that were considered active fell by 2,758, to 21,516, its lowest level since Dec. 30.

After falling the previous five days, the number of the state's virus patients who were on ventilators rose by four, to 190.

Dropping for the fifth day in a row, the number who were in intensive care fell by four, to 375.

Of the more than 1,200 intensive care unit beds at hospitals across the state, 40 were unoccupied Friday, up from 37 a day earlier.

People with covid-19 continued to make up about 31% of all the patients in intensive care.

Rules issued by the federal Centers for Medicare and Medicaid Services require employees at hospitals, nursing homes and other health care facilities in Arkansas and 23 other states to have at least one vaccine dose by Monday or have a pending or approved request for a religious or medical exemption.

The U.S. Supreme Court upheld the requirement, which applies to facilities that receive reimbursement from Medicare or Medicaid, on Jan. 13, lifting a temporary order that had blocked the rule's enforcement in those 24 states.

The requirement took effect Jan. 27 in 25 states where such orders were not in effect at the time of the Supreme Court ruling.

In Texas, where a separate lawsuit challenging the rule was dismissed by a judge on Jan. 19, the requirement takes effect Feb. 22.

At Arkansas' Conway Human Development Center, one of five state-run centers for people with severe developmental disabilities, just 64% of employees had been fully vaccinated as of Friday, the lowest rate among the five centers. An additional 10% had been partially vaccinated.

Across all the centers, about 81% of employees were fully or partially vaccinated, and an additional 9.6% had approved exemptions.

"We do not anticipate penalties within the first 90 days," Human Services Department spokesman Gavin Lesnick said in an email of the employees who were not in compliance by Monday.

"We continue to encourage vaccination among employees at these facilities, and we are hopeful that this will not create staffing issues."

The Arkansas Legislative Council last month signed off on the vaccination requirements for the human development centers and several other state-run health care facilities.

Act 977, signed by Hutchinson in April, prohibits state and local government entities from requiring people to be vaccinated, but it makes an exception for state-run health care facilities that receive the council's approval.

Lesnick and spokespeople for the University of Arkansas for Medical Sciences and state Department of Veterans Affairs said they weren't aware of any employees who had resigned over the requirement.

She said 82% of those subject to the requirement were fully vaccinated. An additional 3% were partially vaccinated, and 4% had approved exemptions, she said.

"I would imagine we'll be at least 92% or so by Monday. Hopefully, we'll be more than that."

Employees who aren't in compliance will receive an oral warning Tuesday, Taylor said.

Those who continue to be out of compliance will be placed on unpaid leave on March 15, then terminated on April 15.

"We're really hoping it dosen't come to that, because there are avenues for people to take," Taylor said. "If they have a sincerely held belief, or they have a medical reason for not getting the vaccine, they need to file the exemption paperwork."

Among other state-run entities, data provided by Lesnick indicated that about 81% of employees at the Arkansas Health Center, a psychiatric nursing home in Benton, had received at least one vaccine dose and an additional 5% had an approved exemption.

At the Arkansas State Hospital in Little Rock, about 93% of employees were fully or partially vaccinated, and an additional 1.7% had received exemptions.

Veterans Affairs Department spokeswoman Sue Harper said in an email that 89% of employees at state-run veterans homes in North Little Rock and Fayetteville are fully vaccinated.

The percentage who have received at least one dose is "still evolving," she said.

She said the department hasn't received any requests for religious or medical exemptions.

"We have no indications of any issues" the vaccinations mandate might cause with respect to staffing at the homes, Harper said.

"The nursing homes will continue to provide quality care."

Monday's deadline also applies to private facilities, some of which had already enacted their own vaccination mandates.

At Baptist Health, which has 11 hospitals around the state, the vaccination rate among employees is "over 84 percent and rising," spokeswoman Cara Wade said in an email.

"Monday is the last date for compliance with the first dose and we plan to evaluate future actions at that time," Wade said.

"We are working to process valid exemptions as well as coordinating proof of vaccine for our 11,000 employees throughout Baptist Health. We are also continuing to hold vaccine clinics for our employees."

For employees who aren't in compliance, "initial options include placing employees on leave or duties not subject to the mandate, if available," Wade said.

"We have not had any employees give this reason for leaving nor do we anticipate any manpower shortages overall because of the mandates," she said.

Because of its "high COVID-19 vaccination compliance rate," Arkansas Children's has set an "internal deadline" of Feb. 28 for compliance with its vaccine requirement, spokeswoman Hilary DeMillo said in an email.

At Arkansas' 222 nursing homes, 85.7% of employees were fully vaccinated as of Jan. 30, up from 84% on Jan. 15, said Rachel Bunch, executive director of the Arkansas Health Care Association, which represents the facilities.

"I'm hopeful that we don't lose a lot of workers and that we get to the deadline as smooth as possible," Bunch said. "We can't afford to lose staff members right now."

The statewide cumulative count of cases rose to 804,145.

The number of people who have ever been hospitalized in the state with covid-19 grew Friday by 77, to 34,657.

The number of the state's virus patients who have ever been on ventilators rose by 10, to 3,517.

The increase in total vaccinations recorded Friday, however, was down compared with the one a week earlier, although newly recorded first doses were up.

The Health Department's tally of total doses rose by 3,120, which was smaller by 244 than one a week earlier.

Booster shots made up 33% of the most recent increase.

The count of first doses rose by 951, which was up by 328 compared with the increase in first doses a week earlier.

After rising slightly a day earlier, the average number of total doses administered over a rolling seven-day period fell to 2,423, which was near its lowest level since the Health Department started regularly releasing daily vaccination numbers in January 2021.

The average for first doses rose to 781, which was still down from an average of 874 a day a week earlier and more than 1,300 a day the week before that.

According to the U.S. Centers for Disease Control and Prevention, the percentage of Arkansans who had received at least one vaccine dose remained Thursday at 65.3%, and the percentage who had been fully vaccinated remained at 53%.

The percentage of fully vaccinated Arkansans who had received booster doses remained at 36.9%.

In the percentage who were fully vaccinated, it fell from being roughly tied with Tennessee for 45th to 46th, ahead of only Idaho, Louisiana, Mississippi, Wyoming and Alabama.

Nationally, 75.8% of people had received at least one dose, and 64.3% were fully vaccinated.

Of the fully vaccinated population nationally, 42.7% had received booster doses.

Information for this article was contributed by Stephen Simpson of the Arkansas Democrat-Gazette.