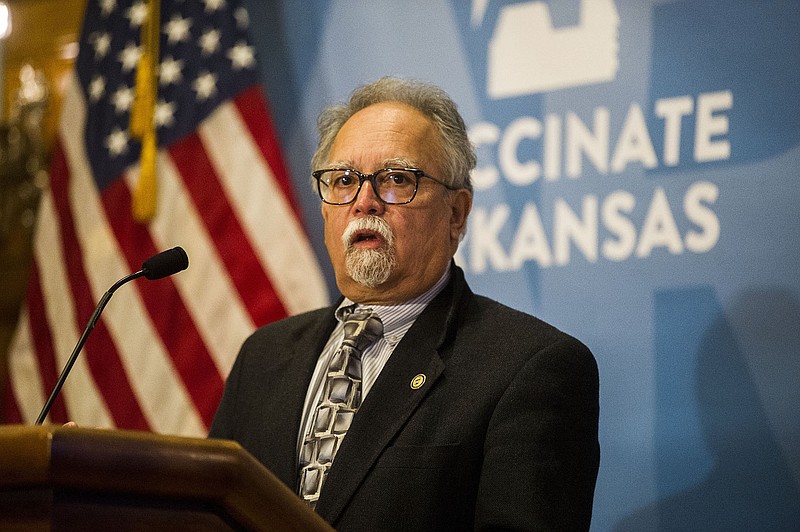 Arkansas' death toll from the coronavirus rose Wednesday by 49 -- the largest single-day increase in more than a year -- even as the state's new cases and number of hospitalized virus patients continued to fall from the heights they reached during a surge driven by the omicron variant.

Referring to the percentage of the state's tests that were positive over the seven-day span ending Tuesday, he added, "Our positivity rate of 12.4% is back to where it was around Christmas."

"Hospitalizations are also down to early January levels," he said. "Let's keep moving in the right direction."

Also Wednesday, the state Department of Health received word of the state's third coronavirus case caused by BA.2, a subvariant of omicron sometimes called "stealth omicron" because of a genetic difference that makes it more difficult to track.

Before Wednesday, the largest one-day increase during the omicron wave was the 48 deaths reported Saturday.

During the surge driven by the delta variant last summer, the largest one-day increase was the 45 deaths reported on Aug. 24.

The average number of deaths reported each day over a rolling seven-day period, already above the peak it reached during the delta surge, rose Wednesday to about 38, its highest level since the week ending Jan. 30, 2021.

Health Department spokeswoman Meg Mirivel said two of the deaths reported Wednesday happened in early January, and the rest occurred within the past month.

Because of delays in reporting, as well as the amount of time it can take for someone to succumb to complications from covid-19 after being infected, health officials have said the number of coronavirus deaths reported each day in Arkansas is likely to remain high for some time even as the state's new case numbers decline.

"It's going to be a while before it trends down into the teens and hopefully back down below 10 like it was doing there for a while," Health Secretary Jose Romero said Wednesday.

The state's first case of covid-19 caused by BA.2 was reported to the Health Department on Jan. 31, and the second one came Monday.

All three cases were reported by private laboratories, Romero said.

He said scientists believe BA.2 is 60% to 120% more transmissible than the original omicron strain, but "all the other characteristics" are similar.

People who were infected by other forms of omicron should also have "some degree of protection" from BA.2, Romero said.

"Whether that protection is longer or shorter, we don't know," he said.

According to a weekly World Health Organization report issued Tuesday, no evidence so far indicates that BA.2 causes severe illness more often than other omicron strains.

In some countries, including Denmark and South Africa, BA.2 is now the dominant subvariant.

According to updated U.S. Centers for Disease Control and Prevention estimates released Tuesday, it accounted for 3.9% of the new coronavirus cases in the United States last week, up from 1.6% the previous week.

The CDC had initially estimated that it made up 3.6% of the cases in the week ending Feb. 5.

Romero said he doesn't see the presence of BA.2 in Arkansas as cause for alarm.

"Right now, what we're seeing is not going to change the downward trend of our cases," he said.

The state's total count of cases rose Wednesday by 1,124, an increase that was smaller by 561 than the one the day before and less than half the size of the one the previous Wednesday.

Already at its lowest level since the week ending Dec. 28, the average daily increase in the state's case count over a rolling seven-day period fell Wednesday to 1,450.

At its lowest level since Jan. 10, the number of the state's virus patients who were on ventilators fell by two, to 155, its second straight daily decline.

The number of intensive care unit beds in the state's hospitals that were unoccupied rose by one, to 47.

People with covid-19 made up about 25% of all the state's patients in intensive care Wednesday, down from about 26% a day earlier.

After reaching an all-time high of 1,819 on Jan. 26, the total number of covid-19 patients in the state's hospitals has fallen every day except one.

The number in intensive care reached a high during the omicron surge of 515 on Jan. 25. That was above its peak of 458 last winter but below its all-time high of 558 in August.

The number of the state's virus patients who have ever been on ventilators rose by two, to 3,575.

The state Health Department's tally of vaccine doses that had been administered rose Wednesday by 2,889, which was smaller by six than the daily increase a week earlier.

Booster shots made up 32% of the most recent increase.

The count of first doses rose by 991, which was up by 32 from the increase in first doses a week earlier.

After rising a day earlier, the average number of total doses administered each day over a rolling seven-day period fell slightly, to 2,838, which was still up from an average of about 2,400 a day a week earlier but down from more than 12,000 a day in early December.

Climbing for the second day in a row, the average for first doses rose to 908.

According to the CDC, 65.5% of Arkansans had received at least one dose as of Wednesday, up from 65.4% a day earlier.

The percentage who were fully vaccinated remained at 53.2%.

Of that group, the percentage who had received booster doses remained at 37.2%.

In the percentage who were fully vaccinated, it remained roughly tied with Tennessee for 45th, ahead of Idaho, Louisiana, Mississippi, Wyoming and Alabama.

Nationally, 76% of people had received at least one dose, and 64.5% were fully vaccinated.

Of the fully vaccinated population nationally, 43% had received booster doses.