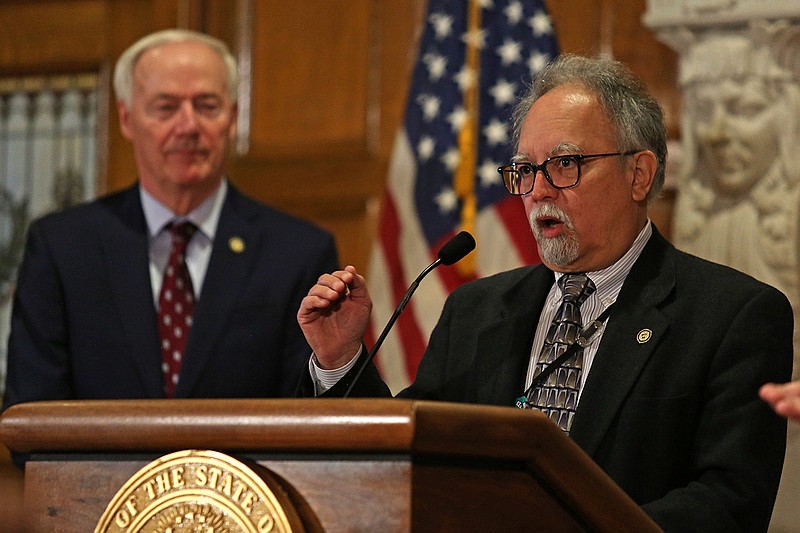 People in more than half the counties in the United States, including more than 40% of those in Arkansas, no longer need to wear masks in public to prevent the spread of covid-19, according to new guidance issued Friday by the U.S. Centers for Disease Control and Prevention.

Previously, the CDC had recommended wearing masks in areas with "substantial" or "high" levels of transmission. That covered more than 95% of U.S. counties, including all of Arkansas.

The revamped guidance factors in hospital admissions and hospital capacity, along with new cases, to label counties according to "covid-19 community levels" that determine whether mask-wearing is recommended.

The result is that mask-wearing is no longer considered imperative in about 63% of U.S. counties, covering more than 70% of the population, where the levels of covid-19 are considered "low" or "medium."

Those include 32 of the 75 counties in Arkansas.

Among them are Washington and Benton counties in the state's northwestern corner, Jefferson County in southeastern Arkansas and Pope County in west central Arkansas. All are labeled as having a medium level of covid-19.

In all, the counties where masks are still recommended encompass about 60% of the state's population.

Jackson County was one of four in the country where the label was listed as "not available."

CDC spokeswoman Kristen Nordlund said the label means the data for one or more of the metrics used to determine a county's label was not available for a particular week.

"This could be due to a number of factors, including data not being reported or delays in data reporting," Nordlund said in an email.

During a teleconference with reporters, CDC Director Rochelle Walensky said the new guidance represents a shift in goals, from trying to prevent transmission to protecting people at high risk for severe illness and preventing hospitals from becoming overwhelmed.

During the omicron surge, she said, "many, many of our infections did not result in severe disease."

She said the risk of severe illness from the virus has been reduced as much of the population has gained immunity through vaccination or infection.

"We recognize that we need to be flexible," she said, by relaxing prevention measures "when things are looking up" and ratcheting them back up in response to new variants or surges.

She said some people, especially those at high risk of severe covid-19, may choose to take extra precautions regardless of their county's label.

"Anybody is certainly welcome to wear a mask at any time if they feel safer wearing a mask," Walensky said.

"If it's in the low area, I would say masks are not needed at this point in time," she said.

She added, however, that regardless of their county's label, people should still get vaccinated and follow the CDC's guidelines for quarantine if they're exposed to someone with covid-19 and isolation if infected.

At his weekly news conference at the state Capitol, before the new guidance was issued, Gov. Asa Hutchinson said he spoke with Walensky on Friday morning and was looking forward to seeing her agency's recommendations.

A Hutchinson spokesman didn't respond to a request for comment on the new guidance after it was issued.

The new guidance applies to the general public as well as schools, a setting in which the CDC had previously recommended universal masking, regardless of the level transmission in the community.

The Arkansas Department of Education guidelines for schools refer to the CDC's previous guidance, although many school districts didn't adopt mask requirements this school year and others dropped them as the state's new cases began falling.

Officials with the Education Department and Department of Health said they would review the CDC's new guidance.

In Pulaski County, both the Little Rock and North Little Rock school districts continue to require the wearing of face masks by students and employees.

In the Pulaski County Special School District, masks are optional.

The Little Rock School Board discussed changes to its requirement as recently as Thursday night, knowing that the CDC was expected to issue altered guidance on Friday.

School board member Jeff Wood made a motion to replace the current requirement with one based on reaching a certain number of cases in the district in the previous week.

The motion was defeated in a 8-1 vote, in part because of a reluctance to act on a matter that was not on the published agenda for the meeting.

Other concerns centered on how to select a threshold for requiring the masks and whether that number should be cases among the district employees and students or in the surrounding community.

"I would love to vote for this," board President Greg Adams said, but added that he couldn't without data and advice from medical professionals.

Wood requested that the board meet in special session -- as soon as next week -- to hear from medical professionals on ways to transition to an optional mask system when low covid-19 case numbers permit.

In Benton County, at least one school district with a mask requirement will consider changes to it policy.

Roberts said the district has required masks for most of this academic year.

"We have been fortunate; since we followed guidelines so closely, we had limited number of student exposure and minimal staff absences," Roberts said.

The guidance was released as the number of people hospitalized with covid-19 in Arkansas rose for the first time in 25 days and the state's covid-19 death toll rose by 44 -- the largest one day increase in deaths in just over a week.

Meanwhile, a Health Department official said during an online presentation Friday that eight Arkansas children have died from covid-19 since March 2020 -- double the number the department had previously acknowledged.

Health Department spokeswoman Danyelle McNeill later clarified that the additional four deaths are still being investigated to confirm that the virus was a contributing factor.

"The medical examiner will conduct an autopsy on the majority of the pediatric deaths that we have seen due to COVID," Austin Porter, the department's deputy chief science officer, said in a statement emailed by McNeill.

"It may take several weeks to months before the report is final. We then request medical records from the hospital along with autopsy report. Once we have these files/records, [Health Secretary Jose] Romero will review these records and the reported death is released. It should be noted that three of the four pediatric deaths that have yet to be released occurred in the last two months."

The number of covid-19 patients in the state's hospitals rose by four, to 549.

It was just the second time the number had increased since it peaked at an all-time high of 1,819 on Jan. 26.

Also breaking from a downward trend, the number covid-19 patients who were in intensive care rose by 10, to 175, after falling the previous 18 days.

"The overall trend is still down and we are not as concerned about the day to day variations," Dillaha said in a statement.

"If there is an established trend showing an increase, then we would need to take additional action to inform the public as well as to conduct an analysis to determine what the contribution factors are."

Likely reflecting a reduction in testing due to the winter storm that hit the state this week, the state's count of cases rose by 323, which was just over a fourth the size of the increase the previous Friday.

Dropping for the 11th day in a row, the number of the state's virus patients who were on ventilators fell by five, to 84.

The average daily increase in the state's case count over a rolling seven-day period fell Friday to 739, its lowest level since the week ending Dec. 18.

With recoveries and deaths outpacing new cases, the number of cases in the state that were considered active fell by 745, to 6,755, the smallest number since Dec. 2.

At its hospitals in Little Rock and Springdale, Arkansas Children's Hospital had 14 covid-19 patients on Friday, including two who were on ventilators, spokeswoman Hilary DeMillo said.

More than half of the 14 patients were at least 5 years old, making them eligible for vaccination, but only three were fully immunized, she said.

Icy roads likely also contributed to a further slowdown in the state's vaccinations.

The Health Department's tally of doses that had been administered rose Friday by 1,196, which was less than half the size of the daily increase a week earlier.

Booster shots made up 33% of the most recent increase.

The count of first doses rose by 429, which was about a third the size of the increase in first doses a week earlier.

Already at its lowest level since the Health Department started regularly releasing daily vaccination numbers in January 2021, the average number of total doses administered each day over a rolling seven-day period fell to 1,694.

The average for first doses fell to 577, also a new low.

According to the CDC, the percentage of Arkansans who had received at least one dose remained Friday at 65.7%.

The percentage who had been fully vaccinated rose from 53.4% as of Thursday to 53.5%.

Of those who were fully vaccinated, 37.7% had received a booster dose as of Friday, up from 37.6% a day earlier.

In the percentage who were fully vaccinated, it went from being 46th to roughly tied with Tennessee for 45th, ahead of Idaho, Louisiana, Mississippi, Wyoming and Alabama.

Nationally, 76.3% of people had received at least one dose, and 64.9% were fully vaccinated.

Of the fully vaccinated population nationally, 43.6% had received a booster dose.

Information for this article was contributed by Cynthia Howell and Will Langhorne of the Arkansas Democrat-Gazette.