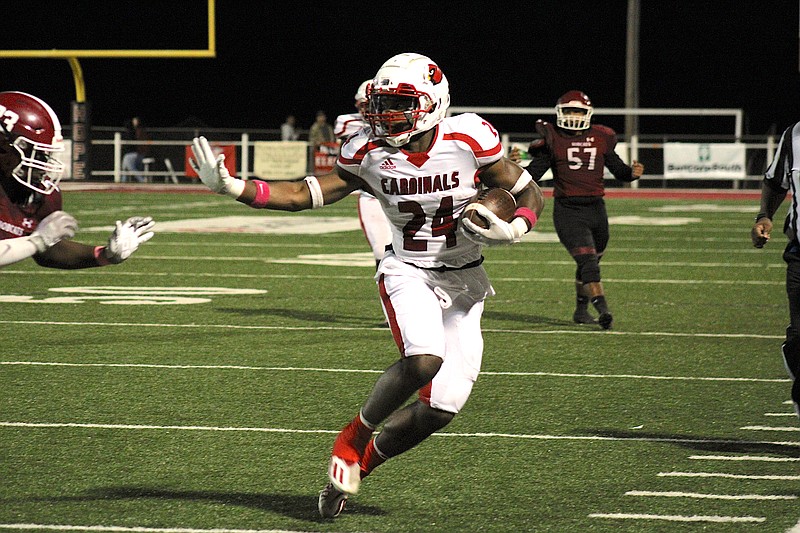 Photo By: Michael Hanich Camden Fairview running back Ja’Toney McGhee runs for the first down in the game against the Hope Bobcats.

It has been a busy couple of days for players on the Camden Fairview Cardinals football team.

Last Friday, senior wide receiver Brandon Copeland made his commitment to play Delta State. Two days later, senior running back Ja'Coriae Brown made his commitment to play for the University of Arkansas-Monticello Boll Weevils. These are players that are making their decisions early on their future homes to play collegiate football with, with another month to go before the 2022 National Signing Day.

This Monday, one more Camden Fairview star football player made his decision to play college football. The Cardinals's big running back Ja'Toney McGhee announced his decision on Twitter to commit to Northeastern State University to play for the RiverHawks. He will be joining former Camden Fairview Cardinals defensive lineman Kyron Kidd, who joined Northeastern one year ago.

McGhee is a bigger and more powerful running back than his fellow back Ja'Coriae Brown. McGhee as a back is able to power through several defenders for extra yards after first contact. He also possesses a speedy and elusive set of moves where he can be hard to keep up with once he breaks through the second line of an opposing defense.

The Cardinals's offense has averaged 36.8 points per game behind a well-balanced setting of attack through the passing game and rushing game. Camden Fairview has averaged 214.8 rushing yards per game behind the dynamic set of playmakers in the backfield with McGhee, Brown and dual-threat quarterback Martavius Thomas.

McGhee will be joining a collegiate program that has been craving a spark of productivity and wins for almost a decade. The RiverHawks have accumulated an overall record of 14-85 since the 2011 season. They did not have a college football season in 2020 due to the COVID-19 pandemic.

The RiverHawks finished the 2021 season with an overall record of 2-9. Their offense only averaged 14.2 points per game behind an underwhelming rushing game. The RiverHawks averaged 86 rushing yards per game and 2.8 rushing yards per carry. Having a big and explosive running back like McGhee could bring the program one step closer to becoming an efficient college football program that can get back to .500%.

McGhee has a chance to create a special collegiate career with Northeastern State. He could be be an impact player immediately for the RiverHawks that will look to utilize the dynamic talent they have acquired in this 2022 recruiting class.

When asked about how relieved he was now that he found a home to play college football, Toney responded with, "I feel very relieved. It took a lot of grind and woke behind to get where I’m at now. I feel as if I’ve made the best choice possible only thing I can do from here is keep working to get better."

It takes a special place for someone like McGhee to commit with several weeks left until signing day. When asked what made Northeastern special, McGhee responded, "Northeastern made me feel more of a home than any other coach I’ve talked to. They always kept in touch and made sure I was doing well I love how they stayed with me the whole way through the recruiting process."

Finally, when asked about he the goals he will immediately set with new his team, McGhee responded, "I hope to be a big part of the organization on the field that they are already building I know it’s going to be tough being the new guy in town, but that won’t stop the work I will put In to be a great player."

McGhee has been one of the hardest-working players on and off the field. He will look to continue this mentality at the collegiate when he signs on February 2nd.