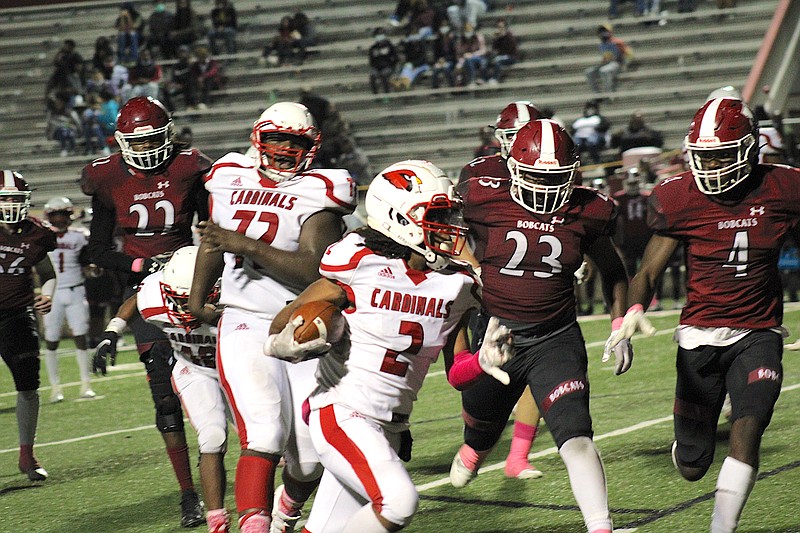 Photo By: Michael Hanich Camden Fairview wide receiver Brandon Copeland runs for the touchdown after making the reception in the game against the Hope Bobcats.

With less than a month left until the 2022 National Signing Day, schools are looking for undervalued and underrated players to join their college football programs.

Over the span of four days, three star football players for the Camden Fairview Cardinals made their decisions to commit to their future collegiate homes and teams.

Wide receiver Brandon Copeland received offers from several different schools to play college football. The Delta State Statesmen were one of the first teams to take a big interest in Copeland after his fantastic senior season at Camden Fairview.

Copeland has decided not to make the Statesmen wait and committed to play for Delta State starting in the 2022 college football season.

Copeland became the number one receiver for Camden Fairview after the 2020 season when he caught 13 receptions for 200 yards and three touchdowns. Not only did he become a highly productive receiver for the Cardinals, he was one of the most instrumental players for one of the most explosive offenses of all high school football teams in the state of Arkansas.

In 12 games this 2021 season, Copeland accounted for 71 receptions for 1,246 yards (an average of 17.5 yards per game) and 17 touchdowns. Copeland finished third in the state of Arkansas in total receiving yards accounted for, seventh in total receptions and tied for fifth in receiving touchdowns. Copeland's impact helped the Cardinals offense average 278.5 passing yards per game and 36.8 points per game.

Copeland has a great combination of speed, athleticism, great hands, reliability to catch the ball, excellent route running and agility. He can run many dynamic routes from the outside, which adds to his versatility.

His best game of his high school career came in the 42-27 road win over the Hope Bobcats when he caught 11 receptions for 208 yard and three touchdowns. Camden Fairview clinched their first conference championship title since the 2013 season during the game. Copeland needed to be the main producer on the offense, along with quarterback Martavius Thomas, with three other offensive star players, including two receivers, out.

Copeland had five games in the 2021 season where he accounted for at-least 100 receiving yards.

He will play for a Statesmen team that finished the season with an overall record of 5-6. The Statesmen averaged 25.7 points per game this season and an average of 397.3 yards per game. They averaged 235.9 passing yards per game, but also accounted for 13 touchdowns through the passing game. The Statesmen were in the red zone 45 times this season and only scored 19 touchdowns, with three of them coming from passes. Copeland will add a lot of explosive big plays to the team, potentially as early as this upcoming season.

"My coach came at me first and really wanted me to be a part of the family, and not too many were showing me love, so I committed to where I was wanted," Copeland said.

Delta State was there for Copeland from the beginning of the recruiting process; now they will benefit from his high-caliber talent in the passing game.

"I wanna come in a big-time player, where ever I'm needed," the receiver added.

It may not be long into his collegiate career that Copeland could become an impact player for Delta State.