Cardinals running back Ja'Coriae Brown commits to UAM; will be a Boll Weevil in 2022 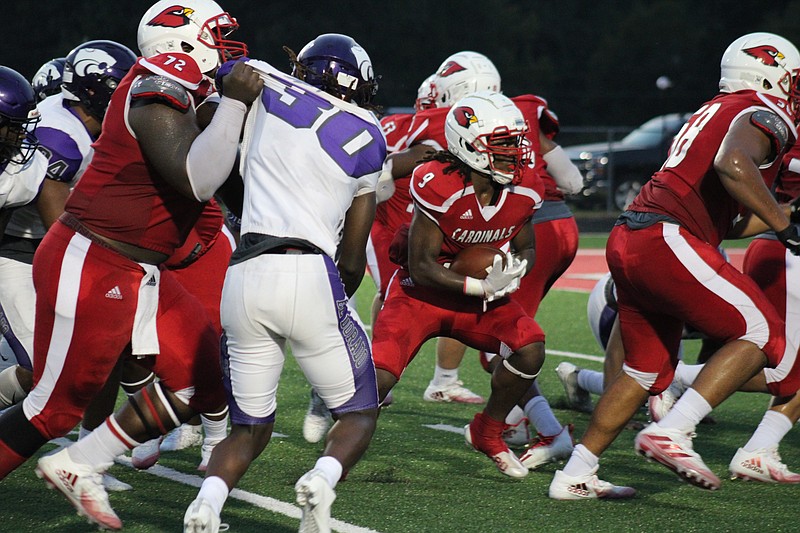 Photo By: Michael Hanich Camden Fairview running back Ja’Coriae Brown rushing for a first down in the game against the El Dorado Wildcats.

Camden Fairview has seen many impact players on both sides of the ball go on to have impressive college football careers. The Cardinals had a fantastic 2021 high school football season where they finished with an overall record of 10-2 and their first sole conference championship title since 2012.

One of the biggest reasons for the successful season was their explosive offense's passing and rushing game.

One of the main impact players for the rushing game of Camden Fairview was running back Ja'Coriae Brown, who has now made his decision on his future home to play collegiate football. Brown has committed to play football for the University of Arkansas-Monticello Boll Weevils. UAM was the first school to offer Brown a collegiate spot on their team, shortly before his huge 2021 season.

There were two games this 2021 season that made Brown was one of the best options to have carry a team's offense in a game. One was the 44-25 home win over the Magnolia Panthers where he rushed for 207 yards and two touchdowns on 29 carries for an average of 7.1 yards per rush. The other big game that showed Brown's big impact as a number one back was when he rushed for 168 yards and three touchdowns on 28 carries for an average of six yards per rush in the 38-33 road win over the Lakeside Rams.

Brown has a great combination of speed, agility and aggressiveness to get more yards after first contact. He has the playing attributes of former Heisman Trophy winner and current new Orleans Saints running back Mark Ingram. Brown also possesses elusiveness and the ability to shift his hips for a potential explosive run.

Ja'Coraie Brown was more than happy to finally end his recruiting process and commit to UAM, a school that had given him attention after a great junior season.

"I'm very happy because this is the sport I love," he said.

He said he felt like he was special to the team even before he committed.

"UAM was making me feel like I was already a part of the team; they were calling every week, checking on me and waiting for me to commit," he said.

Finally, he has stated that he has immediate goals for the Boll Weevils as soon as he steps on campus.

"I hope to help the team win more games and also be the best running back at UAM," Ja'Coraie Brown concluded.

Print Headline: Cardinals running back Ja'Coriae Brown commits to UAM; will be a Boll Weevil in 2022