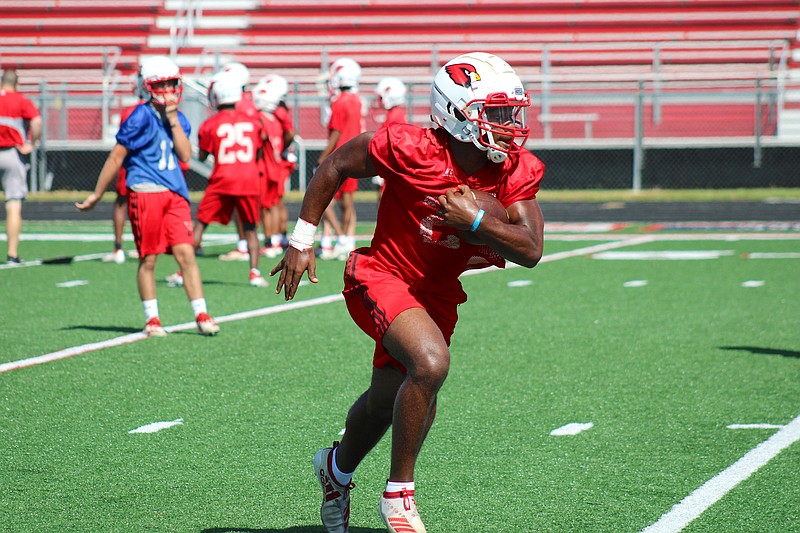 The Camden Fairview Cardinals football program's success was evident this year after they won a conference title; now, a series of players have committed to playing collegiate-level football.

Five Cardinals players had already committed to their new collegiate programs by Monday, and on Thursday, wide receiver Michael "Pistol Pete" Suell announced on his Facebook and Twitter that he had decided to commit to Clarke University to play for the Pride.

Suell has been a long-time contributor to the Cardinals' football program as well as the basketball and baseball teams. He is multi-sport athlete and has shown to be a speedy, highly athletic and reliable playmaker. Suell was one of the biggest contributors to one of the most explosive offenses in the state of Arkansas this season, where he caught ten receptions for 282 yards and five touchdowns.

Suell possesses a great combination of agility, dynamic route running, reliability to extend for the catch and hips to make efficient turns while in his routes. While he is a dangerous route runner, he is a bigger threat in the red zone. He is also sound and proficient blocker while in screen situations or in short passes to his other teammates. This shows he is an unselfish and determined team player, which is great for an offense that likes to utilize short passing situations.

Suell will be playing for a Pride team that seeks dynamic and hard-working players to help build some momentum in the program. This past season, the Pride accounted for an overall record of 1-10 with a 1-4 record in conference play. The offense for the Pride accounted for an average of 14.3 points per game and 131.6 passing yards per game. They were only able to account for 12 passing touchdowns this season.

The Pride could use more efficient support in accounting for first downs and securing touchdowns in the red zone. Clarke only converted 38 of their 138 third down attempted this season for a percentage of 25%. They have also only converted 56% of their red zone attempts into scores throughout the season. These are portions of the game where Suell can help contribute if he finds his way to an early key role on the offense.

Suell is more than excited to start preparing for his collegiate journey with the Clarke University Pride in Dubuque, Iowa. He has been grinding in workouts to impress collegiate programs just as he has been grinding during the season. Now he has secured a roster spot and a chance to be a big-time contributor for Clarke.

I'm feeling great but I'm humble; at anytime this could be taken from me. I thank God, and I'm going to keep pushing," Suell said

Suell has been a three-sport contributor for many years and has the talent to be a multi-sport athlete for the Pride, but he said for now, his primary focus is football.

"If anything I'd try to play baseball, but football brought out a happy side of me that I never felt, that just made me love the game and I'm glad I got my chance at the next level. Time to make the most of it," he said.

He has high goals for himself as a star athlete and a football player as he looks to transcend his talents and impact his team by accomplishing three goals: Suell wants to get accustomed to the weather in Iowa, which will help his consistency on the field, become a dominant player in practice and win a ring with the Pride.