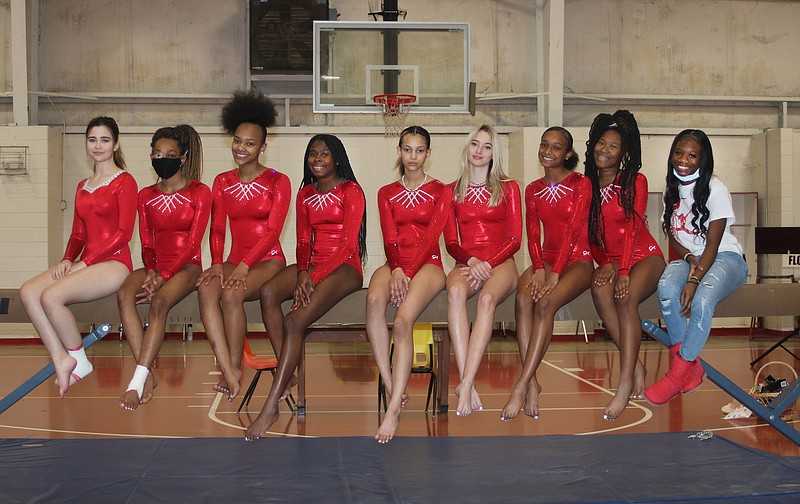 Camden Fairview's gymnastics head coach Nancy Delorme, however, has created a team that has won three consecutive state titles and she looks to make that four this season with a young team.

Entering her fifth season as the head coach of the Lady Cardinals' gymnastics program, the team under Delorme has seen nothing but success and consistency --as well as state titles. It is tough to imagine dominating a sport that judges many different individual performances, yet they have been the team to beat every single year.

The Lady Cardinals were undefeated in the 2019 season, following their first title that started the dominate run. In the 2020 season, the Lady Cardinals continued to present themselves as the best team in the state, heading to the championship meet with an undefeated record. They were looking to secure their third consecutive title until the impact of COVID-19 shut down the sports world and canceled the season.

Last season, the Lady Cardinals ended another fantastic year by winning the 2021 Arkansas State Meet with a total team score of 151.400. Kameron Vaughan finished first overall in the state meet in all-around, vault, floor and beam. She also finished fifth in the bars event. Chelsey Purifoy finished second in the bars, floor and all-around. She also finished third place in the vault event.

"It is very hard, especially since I only have sophomores and freshmen. I wear my ring and the freshmen really want one. The sophomores had a taste of winning and they want that feeling again," Delorme said.

Delorme has continued to find unique ways of pushing her team to get to the ultimate prize, which is a state title and a ring. She has certainly created a program that starves for a championship every single year. She does so by keeping her team focused one day and one drill at a time. The team's short-term goals are just as strong as their long-term goals every season.

"I want no fall beam routines. Clean jumps and tumbling, clean vaults and bar routines. Bars are our weakness so we concentrate on adding a new skill. That will increase the score," Delorme said.

This year's Lady Cardinals team look to be just as efficient and productive as the past teams have been. In their most recent meet last Friday at home against Dumas and Monticello, the Lady Cardinals' senior high team won the meet with total score of 148.5.

In the meet, ninth-grader Taylor Bryant dominated by finishing in first place in the vault, beam, bars, floor and the all-around. The Lady Cardinals had another ninth grader, Alexis Gregory, that dominated the meet last week by getting second place in all of the events, except where she shared the first place ranking of the floor routine with Bryant. Finally, ninth-grader Xaviana Thomas finished in third place in the bars and floor routine as well as fourth in the beam and the all-around event.

The Lady Cardinals will be have their next meet today in Monticello along with Dumas at 4:15 p.m. Camden Fairview will be big favorites after dominating last week's meet.