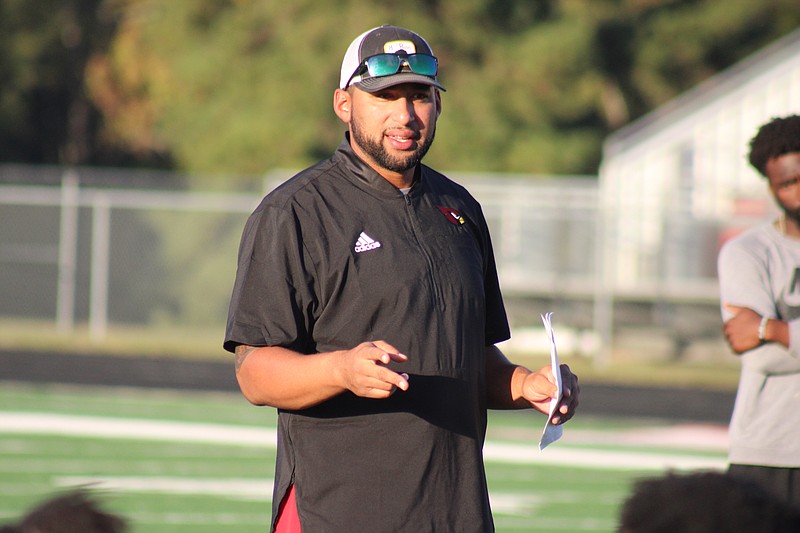 It has been just over a month since the Camden Fairview Cardinals Head Coach Jacob Monden's resignation announcement, and the search for a new football coach is wide open.

Fans, players and boosters can only speculate as to who will lead the reigning 5A South conference title winners. There are rumors and wish-lists being made around as candidates are considered.

Ball has created some of the most productive and dominant defensive players in Arkansas over the past couple of seasons, including several who have signed with collegiate programs this year.

This season, the defense for Camden Fairview allowed an average of only 21.4 points per game, the least in the conference. They rank seventh in the state in 5A play in scoring defense. Camden Fairview had two shutout wins this season -- 52-0 over Hamburg and 33-0 over Arkansas High School.

There were also three defensive linemen this season that accounted for 13 tackles for loss this season. The team had the state's leader in sacks accounted for in Jacovey Barker, who managed 19 sacks over the course of the season. The Cardinals had high-caliber playmakers at each position group.

Ball was previously the Cardinals' run game coordinator for three years. He has been with the program for six total seasons.

Stone was instrumental in creating one of the most explosive and well-balanced offenses in the state of Arkansas this season. The Cardinals averaged 39.9 points per game behind the stellar combination of a deep and consistent passing game and an aggressive rushing offense. They had six games this season where they scored at least 40 points as well as six games where they accounted for at least 50 points.

This is an offense that adjusted well to significant injuries late in the season by changing their gameplan or bringing in younger players who were ready step up. Stone has been able to create an offense that has depth enough to let any team member become a key player when asked to step up.

Another coach who has been popping up in the rumor mill for Camden Fairview is West Memphis Blue Devils Head Coach Robert Hooks. Hooks has spent the previous two seasons as the head coach of the Blue Devils learning the ins-and-outs of the role. He is a former offensive coordinator for the Cardinals, with his most accomplished season in 2012, the last time the Cardinals won the conference title before the 2021 season. The offense for Camden Fairview averaged 42.5 points per game that year with one of the best offenses in the state.

Another high-caliber defensive coordinator who could see their shot at becoming a head coach is Parkview Patriots's Nick Vaughan. He has created one of the most dominant defenses in the state of Arkansas. This season, the Patriots allowed an average of only 14.9 points per game as well as holding opposing defenses to 10 or fewer points seven times this season. Two of the Patriots's wins this season were games where the defense shutout the opposing offense.

Hot Spring Trojans Head Coach Darrell Burnett is another coach who has been rumored to be on the watch list to be the next head coach of the Camden Fairview Cardinals. Burnett has been the head coach of the Trojans, a conference rival who have been rebuilding their program, since 2018.

The Trojans accumulated a record of 4-16 in the 2016 and 2017 seasons. In his four seasons at Hot Springs, Burnett has accumulated an overall record of 14-25 with a 10-14 record in conference play.

Burnett has been able to develop a program that went from the bottom of the barrel in the conference into the middle of the pack, and the Cardinals already have the talent and experience to start the 2022 season at the top of the conference.

Two potential candidates from their rivals in the El Dorado Wildcats are two offensive minded coaches that may be ready to become head coaches are offensive coordinator Kris Borosvskis and quarterback coach Dawson Moser.

Both coaches have been responsible for a Wildcats offense that averaged 46.2 points per game this season behind the playmaking of several dynamic stars. Borosvskis has created an offense that utilizes several great players that were capable of running a high-caliber RPO offense, and Moser was instrumental this year in the development of dual-threat quarterback Sharmon Rester. Both coaches would be great developers for the Cardinals' high-caliber offense led by dual-threat quarterback Martavius Thomas.