COVID-19 at Wimbledon: 3 top-20 men out after positive tests 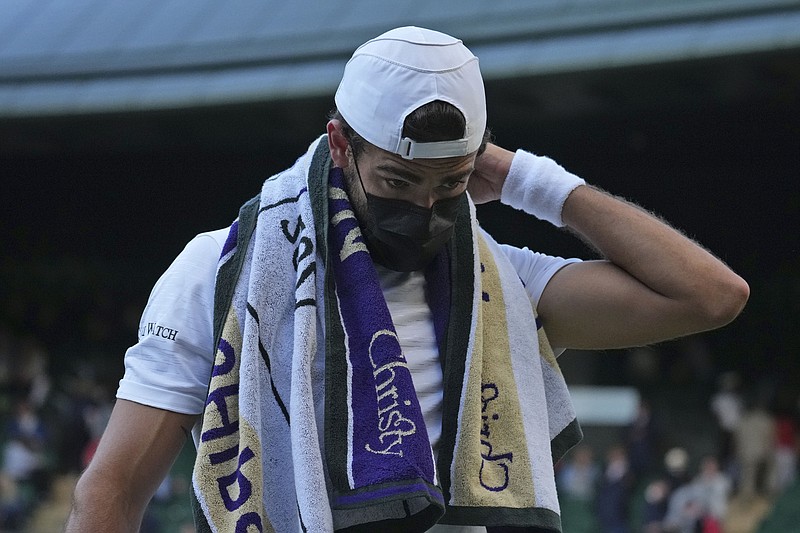 FILE - Italy's Matteo Berrettini wears a mask at the end of the third set during the men's singles quarterfinals match against Canada's Felix Auger-Aliassime on day nine of the Wimbledon Tennis Championships in London, Wednesday, July 7, 2021. At Wimbledon, where the All England Club is following British government COVID guidance that requires neither shots nor testing, three of the top 20 seeded men have withdrawn over the first four days of action because they got COVID-19, with No. 17 Roberto Bautista Agut pulling out Thursday, June 30, 2022. (AP Photo/Alberto Pezzali, File)

WIMBLEDON, England -- Reigning Wimbledon champion Novak Djokovic famously decided not to get vaccinated against COVID-19 -- which prevented him from playing at the Australian Open in January following a legal saga that ended with his deportation from that country, and, as things currently stand, will prevent him from entering the United States to compete at the U.S. Open in August.

More than two years after the pandemic began, coronavirus cases are on the rise around the world lately, due mostly to certain variants, and the health -- and vaccination status -- of individual athletes is once again a key issue. At Wimbledon, where the All England Club is following British government guidance that requires neither shots nor testing, three of the top 20 seeded men have withdrawn over the first four days of action because they got COVID-19, with No. 17 Roberto Bautista Agut pulling out Thursday.

That's raised the specter of an outbreak among players at the Grand Slam tournament, where there essentially is an honor system: If you don't feel well, you're encouraged to get a test on your own; if you test positive, you're encouraged to reveal that and take yourself out of the bracket.

"I won't lie: When I have a cough or something, I get paranoid. It's what we kind of have to learn to live with. I feel bad for people who test positive. A place like Wimbledon is definitely not where you want to have it," said Ajla Tomljanovic, a 29-year-old from Australia who is ranked 44th and won Thursday to set up a third-round match against 2021 French Open champion Barbora Krejcikova.

"If you have symptoms or you're feeling under the weather, it's your responsibility. I think we all travel with home kits; at least I do. And then once you've tested positive, that's where it comes in that you just say you have it," Tomljanovic said. "Because you could have lower symptoms and try to play, but that wouldn't be the right thing to do."

At Roland Garros last month, Krejcikova lost her opening match in singles, then withdrew before trying to defend her doubles championship after saying she tested positive for COVID-19.

Rafael Nadal, a 22-time Grand Slam champion, said after his second-round victory Thursday that he is not doing much other than coming to the tournament site and staying at the house he is renting in the area, "not going out at all anymore."

This is not just a tennis issue, of course. It's something people are grappling with in all lines of work: how worried to be, when to test, whom to tell.

In sports, it's arisen in Major League Baseball, where some players have been unable to travel for games at the Toronto Blue Jays because of Canada's rule against allowing entry to unvaccinated foreigners -- the same sort of restriction that kept Djokovic, a 35-year-old from Serbia with 20 Grand Slam titles, from participating in tournaments in California and Florida earlier this season and would stop him from going to the U.S. Open, because he says he will not get a shot against COVID-19. In the NBA, Brooklyn Nets star Kyrie Irving appeared in only 29 of 82 regular-season games this past season, largely because of his decision not to get vaccinated.

Nearly all women and men in the top 100 of the WTA or ATP tour rankings did get vaccinated. For some, it was all about wanting to avoid getting sick.

"Pretty easy: Vaccines work. Everyone has a right to choose, but more or less, the reason we don't die from diseases from 50 years ago is because we got vaccines," said eighth-seeded Jessica Pegula, who is from Buffalo and won Thursday to reach Wimbledon's third round for the first time. "Of course, it came out really fast, so, sure, there's always that thought: 'I hope nothing happens.' Some people had bad experiences. But for me, I thought it was worth the risk."

For others tennis players, it was more about ensuring they could continue to make a living.

"The ATP, similar to the NFL, the NBA, MLB, they're kind of making you get it, in a way. They're saying: If you don't get it, you might not be able to play certain tournaments or in these games, and we're going to kind of make things so miserable that you're going to have to get it," said Sam Querrey, an American who reached the Wimbledon semifinals in 2017. "So for me, it was a combination that I think it was good to get it, and it makes your life a lot easier from a professional standpoint."

Some players say they respect the choice by Djokovic, who has said he got COVID-19 twice, to stick to his no-vax stance even if it hurts his ability to keep pace with Rafael Nadal, a 22-time Grand Slam champion, in the major trophy count.

"The sport needs him -- needs him in the sport and at big events," said Denis Shapovalov, a 23-year-old Canadian seeded 13th at Wimbledon who said he did not have an easy time deciding whether to get the shots himself but in the end, "I figured it was better to be safe than sorry."

All has been back to pre-pandemic "normal" at Wimbledon this year after 2020, when the tournament was canceled altogether, and 2021, when players were in a bubble-type environment and needed to take COVID-19 tests, and stadium capacity was kept low in Week 1 and spectators were required to wear masks.

An All England Club spokesperson said COVID-19 policies are "under constant review" and pointed to updates made this week, such as increased cleaning, enhanced ventilation, making masks available to players and recommending that masks be worn on official tournament transportation.

"I didn't even know that people were testing positive," said Coco Gauff, the 18-year-old American who was the runner-up at Roland Garros this year, "until I saw another player wearing a mask."

Bautista Agut wrote on Twitter on Thursday that his symptoms weren't very bad but that withdrawing was "the best decision."

One of his coaches, Tomàs Carbonell, said in his own social media post in Spanish: "Roberto could have tried to play the match because his symptoms aren't bad. Out of respect to his colleagues and to the tournament, we decided not to go on court, even if the rules would have allowed it."

Bautista Agut's COVID-19 departure followed those of No. 8 Matteo Berrettini, the runner-up to Djokovic a year ago, on Tuesday, and of No. 14 Marin Cilic, the 2014 U.S. Open champion and 2017 Wimbledon runner-up, on Monday.

Asked after her victory Thursday what her level of concern is after the recent run of positive tests, No. 4 seed Paula Badosa replied quickly: "Zero."

That, the 24-year-old who represents Spain explained, is both because she is vaccinated and already came down with, as she put it with a laugh, every "type of COVID possible." 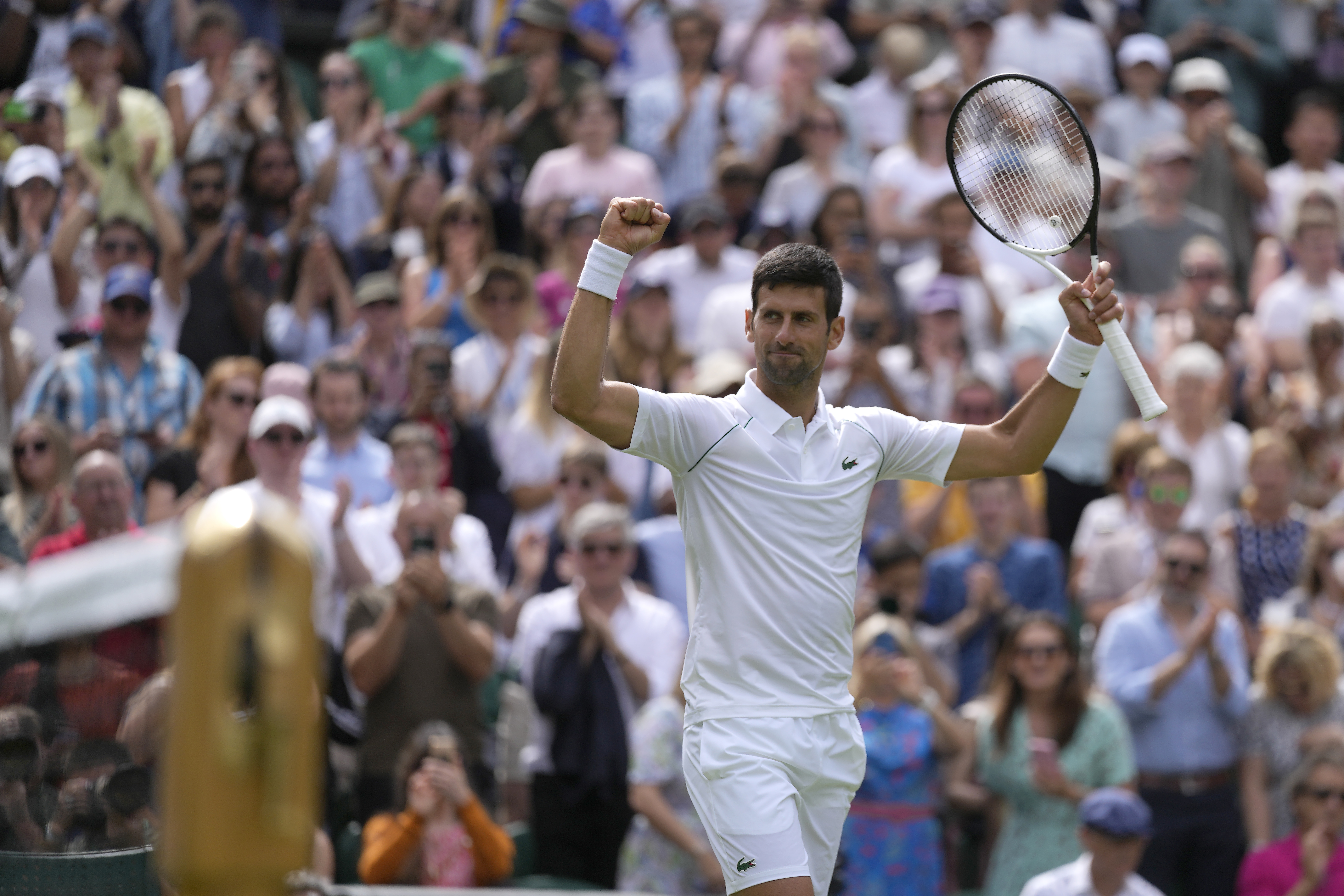 FILE - Serbia's Novak Djokovic celebrates defeating Australia's Thanasi Kokkinakis in a singles tennis match on day three of the Wimbledon tennis championships in London, Wednesday, June 29, 2022. Reigning Wimbledon champion Novak Djokovic famously decided not to get vaccinated against COVID-19 — which prevented him from playing at the Australian Open in January following a legal saga that ended with his deportation from that country, and, as things currently stand, will prevent him from entering the United States to compete at the U.S. Open in August. (AP Photo/Alastair Grant, File) 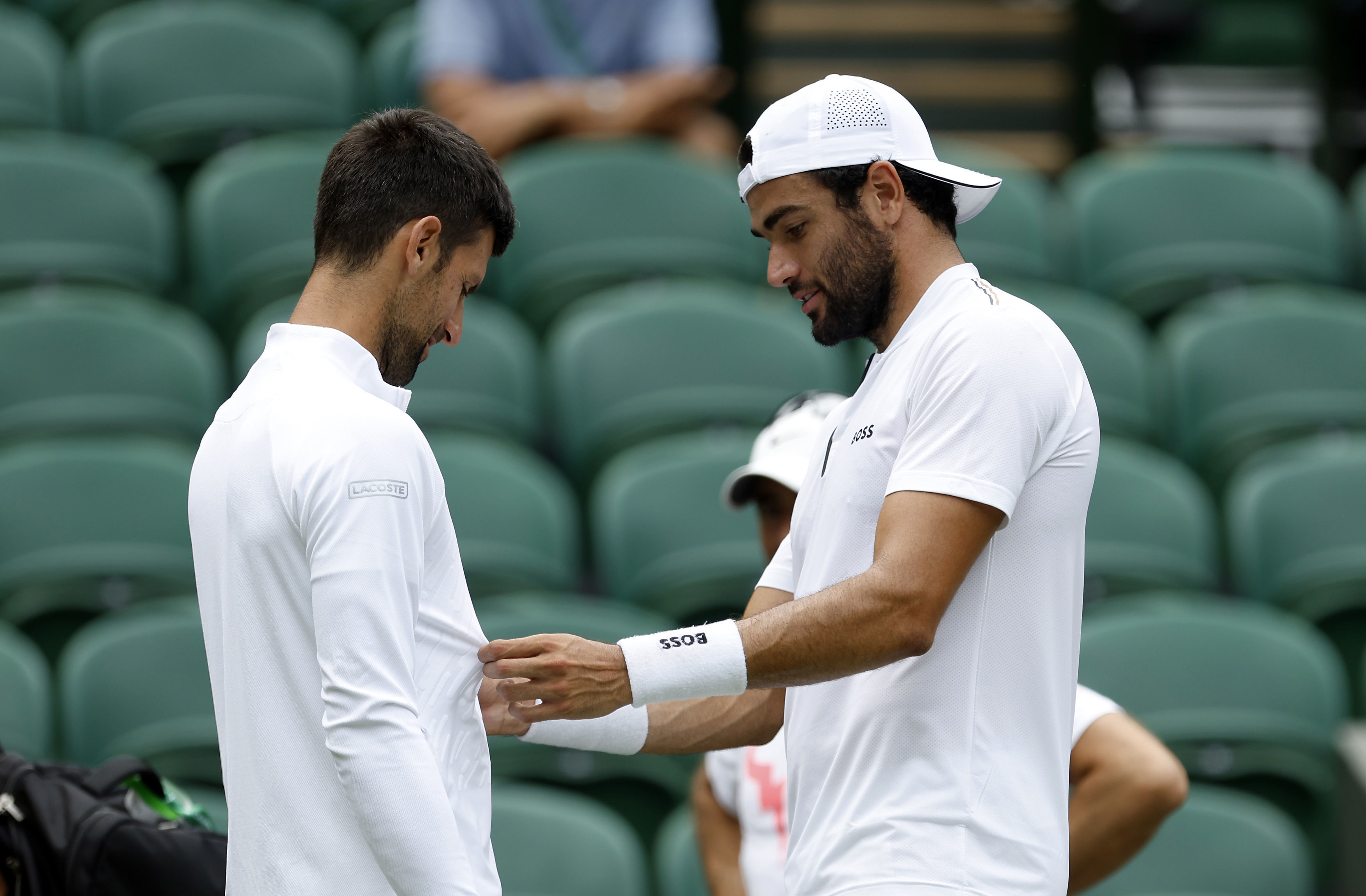 Italy's Matteo Berrettini checks out the clothing worn by Serbia's Novak Djokovic on centre court ahead of the 2022 Wimbledon Championship at the All England Lawn Tennis and Croquet Club, Wimbledon, Thursday June 23, 2022. (Steven Paston/PA via AP)