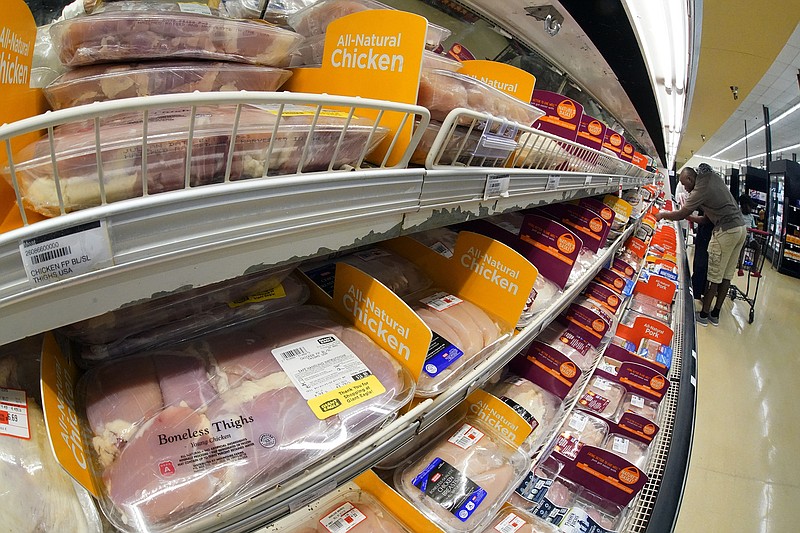 FILE - Chicken is on display in a market in Pittsburgh, July 12, 2022. The Justice Department is expected to file a lawsuit and proposed settlement against some of the largest poultry producers in the U.S. It's part of an effort to end what the government claims have been longstanding deceptive and abusive practices for workers. (AP Photo/Gene J. Puskar, File)

WASHINGTON -- The Justice Department filed a lawsuit Monday against some of the largest poultry producers in the U.S. along with a proposed settlement seeking to end what it claims have been longstanding deceptive and abusive practices for workers.

The suit, filed in federal court in Maryland, names Cargill, Sanderson Farms and Wayne Farms, along with a data consulting company known as Webber, Meng, Sahl and Co. and its president.

In its lawsuit, the Justice Department alleges the companies have been engaged in a multiyear conspiracy to exchange information about the wages and benefits of workers at poultry processing plants to drive down employee competition in the marketplace. The companies did not immediately respond to messages seeking comment.

The government contends the data consulting firm helped to share the information about the workers' compensation with the companies and their executives. By carrying out the scheme, officials allege, the companies were able to compete less intensely for workers and reduce the amount of money and benefits they had to offer their employees, suppressing competition for poultry processing workers across the board, according to court papers.

The defendants and unnamed co-conspirators in the lawsuit account for hiring about 90% of all chicken processing jobs in the nation.

The suit is the latest example of the Justice Department's antitrust enforcement targeting companies the government believes engage in anticompetitive behavior to stifle workers or harm consumers. It also comes as the department continues a broader investigation into labor abuses in the poultry industry.

"Through a brazen scheme to exchange wage and benefit information, these poultry processors stifled competition and harmed a generation of plant workers who face demanding and sometimes dangerous conditions to earn a living," said Doha Mekki, the principal deputy assistant attorney general for the Justice Department's antitrust division.

The suit against the companies was filed with a proposed consent decree -- a settlement that would require the companies to pay $84.8 million in restitution for workers who were harmed by the unlawful information sharing network.

The settlement would also put in place a federal monitor selected by the Justice Department who would ensure compliance for the next decade. The consent decree also would permit Justice Department lawyers and investigators to inspect the poultry processors' facilities and interview their employees to ensure they are complying with the terms, according to court documents.

The suit comes as Cargill and Continental Grain, of which Wayne Farms is a subsidiary, formed a joint venture to acquire Sanderson Farms, paying $203 per share in cash for a company that last year processed more than 4.8 billion pounds (2.2 billion kilograms) of meat.

The proposed consent decree would also resolve allegations that Sanderson Farms and Wayne Farms treated chicken farmers unfairly by using a system that reduced their pay for low performance.