Hot one for Hogs, Cardinal 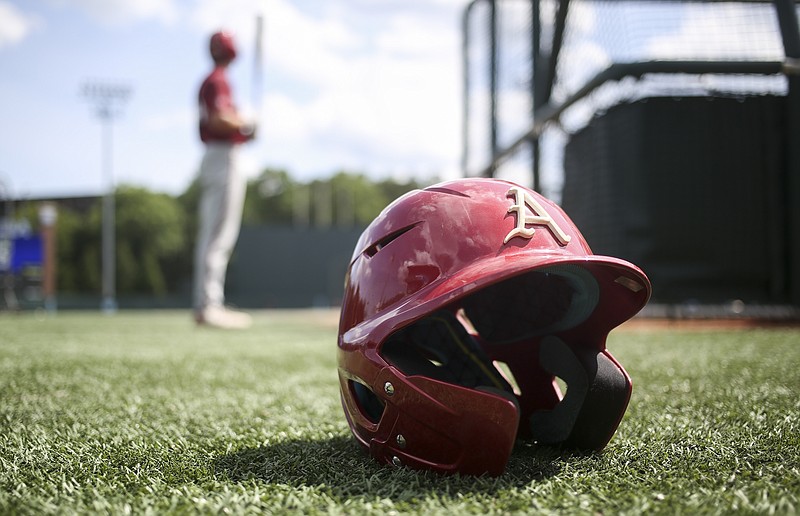 A baseball helmet is shown, Friday, June 10, 2022 during a baseball practice before the NCAA Baseball Super Regional at Boshamer Stadium in Chapel Hill, NC. Check out nwaonline.com/220611Daily/ and nwadg.com/photos for a photo gallery...(NWA Democrat-Gazette/Charlie Kaijo)

OMAHA, Neb. -- The forecast is sunny with a high of 97 degrees and a heat index exceeding 100 for the University of Arkansas' College World Series opener today at 1 p.m. Central against Stanford at Charles Schwab Field.

With the heat index forecast to reach 106 degrees, it will easily be the hottest game the Razorbacks and Cardinal have played this season.

"We've been preparing for this physically and mentally ever since we qualified to get here," Arkansas Coach Dave Van Horn said. "We looked at the forecast. I'm a little superstitious and didn't look at it until after we won [last Sunday's super regional at North Carolina].

"We saw it was going to be in the upper 90s, maybe even the 100s. I mean, that's what you get up here this time of year. A little bit of everything. So we try to hydrate these guys and prepare them. It's the same for both teams, so you just go play."

The conditions could hardly be more different than the setting in Round Rock, Texas, when the Razorbacks and Cardinal played on Feb. 27. Stanford thumped the Razorbacks 5-0 on a frigid day when the wind blew straight into the hitters' faces throughout the game.

"I love baseball, but it was pretty miserable to play in," Arkansas first baseman Peyton Stovall said. "It wasn't great. It was like 30 degrees, and you know, it wasn't a great environment by any means.

"We're looking forward to just being able to play them again, and the ball tends to come off the bat a little bit better when it's hotter than when it's cold."

Stanford outhit Arkansas 13-3 at Round Rock and was in control throughout the game behind a great start from left-hander Quinn Mathews. He struck out 10 and threw 105 pitches in 6 innings.

"One of the things I was most proud of my team, it was 30 degrees and they played like it was 75," Stanford Coach David Esquer said. "They didn't complain. There was no excuse-making. And I think Arkansas, they were playing the game like it was a regular game, too."

Arkansas first baseman Peyton Stovall misplaced the No. 10 hitting top he uses for batting practice during the Razorbacks' appearance at the SEC Tournament in Hoover, Ala.

Mark Taylor, the equipment manager for baseball, gave Stovall a new number for the NCAA Stillwater Regional and that suited Stovall just fine.

The freshman from Haughton, La., is 12 for 24 (.500) with a six-game hitting streak in the NCAA Tournament since wearing the new top.

"I called the hotel where we stayed at for Hoover and couldn't find it," Stovall said. "Next thing you know I had to ask Mr. Mark because I couldn't find mine and he gave me No. 57. So all Stillwater Regional in Oklahoma, I was wearing No. 57.

"So when we won that Stillwater Regional and we got back, I found my BP [batting practice] top. We found it in Dylan [Leach's] locker. I was like, 'We're winning, I'm going to keep wearing 57.'

Arkansas hitting coach Nate Thompson said the Razorback hitters just need to stick with their standard approaches in the larger environment and buzz of the College World Series in the 24,000-seat Charles Schwab Field.

"Yeah, it's a dream for all these guys," Thompson said after Friday's workout at Creighton Preparatory School. "But you've just got to remember it's just baseball. And what we've been doing works. We don't need to go outside of that and create something new. It's just be ourselves and compete with our best. That's either good enough or it's not. But we like where we're at."

Arkansas senior Kole Ramage is the lone Razorback to have pitched at Charles Schwab Field, which was known as TD Ameritrade Park in 2018 when the Razorbacks fell to Oregon State in the CWS championship series.

Ramage worked 1 2/3 shutout innings in relief of Kacey Murphy in Game 2, with 1 hit and 1 strikeout before handing off a 3-2 lead to Barrett Loseke. Ramage struck out Trevor Larnach and induced a ground ball out from Adley Rutschman to strand two runners in the fifth inning, then made a diving catch of a bunt to start a double play as the Beavers threatened in the sixth inning.

Ramage, who allowed a run in two innings of Arkansas' 5-0 loss in Game 3, stood to be the Game 2 winner if Arkansas had held its lead in what became a 5-3 loss.

"Absolutely, I think it takes a little of that pressure off," Ramage said of having pitched with success at the CWS. "I've pitched in this park before, so I kind of know how it plays and I know how it feels to be out there so there's definitely a little bit of pressure off of it."

In Stanford's 5-0 victory over Arkansas on Feb. 27, the Cardinal took a 2-0 lead against starter Hagen Smith in the second inning and knocked him from the game with another run in the third.

The Razorbacks had chances to tighten the game, but left the bases loaded in the fifth and ninth innings

"I think earlier in the year we played a really good game," said Brock Jones, a Stanford outfielder who scored a run in the game. "It was a dogfight. We ended up coming out on top and we were right there on the rail. One of our guys, Drew Bowser, gets hit in the face. We get confrontational a little bit and we're all on the rail a little bit, and you could show up on Saturday ready for another dogfight."

Ten years after members of Arkansas' baseball team visited him in an Omaha children's hospital, 14-year-old Brady Luke and his parents attended the Razorbacks' practice Friday at Creighton Preparatory School.

The Luke family was given tickets to Arkansas' College World Series opener against Stanford.

Brian and Lisa Luke said they have been Arkansas baseball fans since the Razorbacks visited their son and others at Children's Hospital and Medical Center on June 20, 2012. Brady Luke was a 4-year-old and in the hospital recovering from a surgery to address a heart defect his father called hypoplastic left heart syndrome.

Arkansas players spent time coloring and solving puzzles with him in a hospital playroom.

"It was a special occasion for us because it was showing that somebody cared about Brady and what he was going through in his recovery," Brian Luke said. "It really goes to the heart that Arkansas has for these kids that they have an impact on and what their actions say, coming to the hospital and not just shaking hands and doing a fist bump, but spending time and learning about them, understanding where they're coming from and what their journey is and where it's going to lead them in the future."

The 2012 visit was part of community outreach by the Razorbacks, who had multiple days without a game after a 2-0 start in Omaha.

"It was a huge difference for [Brady], having the visitors on the floor," Lisa Luke recalled Friday, "and just the extra pep that he needed to keep pushing when it was hard to get up and walk and those kinds of things.

"There were other teams that visited us, but it wasn't the same."