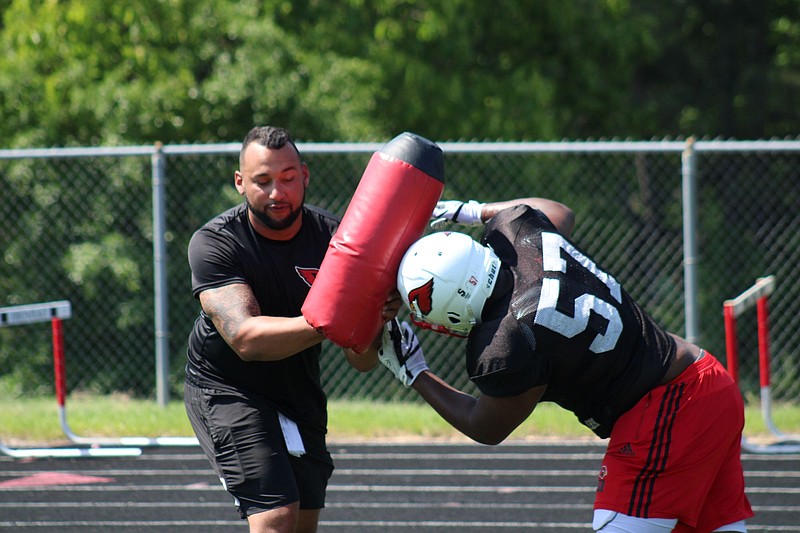 The defensive line of the Camden Fairview Cardinals has been a position group who have been working hard since the conclusion of the 2021 High School Football season. This position group faces a lot of pressure as they replace three of their four starters from last year. Each of the top two units of the Cardinals' defensive line has high-caliber playing potential as they have been preparing extensively in practices and the weight room.

Those preparation results have been huge for junior defensive tackle Khaleb Smith has paid off significantly as he is showing his hard work outside of team camps. This past weekend, Smith took part in LaDainian Tomlinson's Football Camp on the campus of TCU in Fort Worth, Texas. Smith had one of the best overall camp performances in all positions, not only in the defensive line. Smith was named the best defensive lineman at the camp, received the leader award and received MVP of the camp.

Throughout the off-season, Smith has been one of the best interior defensive linemen in a deep and talented unit. He is among the players for Camden Fairview that had the biggest jump in development and performance since the end of the 2021 season. Smith played in all 12 games last season as a backup defensive tackle as he accounted for five solo tackles, two sacks, two tackles for loss and one forced fumble.

Smith will be called upon as the team's first line of defense against the opposing rushing game. He took a big jump this off-season with his strength as he looks to make himself a tank in the middle of the defensive tackles.

Smith told Camden News that he draws inspiration from Tampa Bay Buccaneers defensive tackle Vita Vea and Kansas City Chiefs defensive tackle Chris Jones for his performance style. Vea and Jones are two of the most difficult defensive tackles to run the ball against as they have brute strength, great balance and incredible techniques for players their size to win matchups at the line of scrimmage. What makes them different from the normal defensive tackles is their ability to dominate in the backfield, create pressure on the quarterback and make open-field tackles.

Smith has shown he is a player that can be a consistent play disruptor in the backfield in practices and scrimmages this off-season. He has also shown his development through team camps and in camps like at Tomlinson's. Smith showcased his talent and potential in front of former NFL players, Pro Football Hall of Famers and collegiate coaches. Smith will be a player that will be on college team's radars at the rate of his development.

Right now, Smith wants to continue developing his team to win when the 2022 High School Football Season starts. While he is only a junior, he is showing leadership material as he wants to get his fellow defensive linemen better for a successful 2022 season.