Hogs use extra arms in defeat 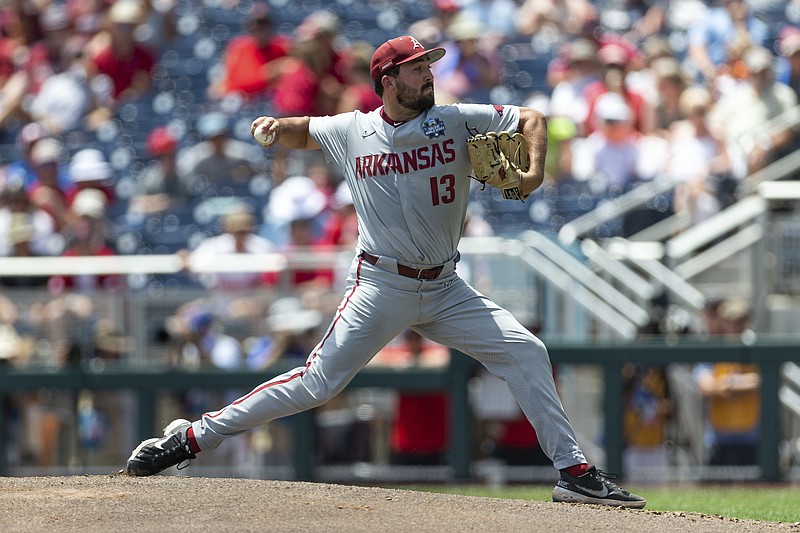 OMAHA, Neb. -- The University of Arkansas managed to accomplish one positive feat in Monday's blowout loss against Ole Miss in the winner's bracket at the College World Series.

The Razorbacks did not over-extend any of their pitchers and gave some of their lesser-used arms some key experience on the biggest stage in college baseball.

Coach Dave Van Horn and pitching coach Matt Hobbs called on six pitchers in relief of starter Zack Morris and none of them worked longer than Elijah Trest's 21/3 innings and none threw more than Jaxon Wiggins' 47 pitches.

Coach Dave Van Horn said all of the pitchers who threw on Monday could return for at least one batter in tonight's elimination game against Auburn. He did not tip his hand on a starter, but suggested it could be right-hander Will McEntire.

Both games involving Arkansas have been decided by wide margins, with Monday's 13-5 loss to Ole Miss the counterpoint to the Razorbacks' 17-2 romp over Stanford on Saturday.

Arkansas pitcher Jaxon Wiggins hit 100 mph on the radar gun with his second pitch in the third inning. The velocity was confirmed by the Creighton baseball analytics team, which is providing analytics at the CWS. He threw two pitches that hit 100 mph in the inning.

Per that outfit's Twitter account, Wiggins was the first pitcher at the CWS to hit 100 on the radar gun.

Wiggins worked just 11/3 innings against the Rebels, allowed 4 runs on 4 hits and 3 walks, with 3 strikeouts. The sophomore right-hander has recorded four or fewer outs in four consecutive outings, dating to his 11/3 inning start at Alabama on May 21 in which he allowed 5 earned runs.

With Ole Miss, Arkansas and Auburn the only remaining teams on their side of the bracket, the SEC is guaranteed to have a participant in the national championship series for the 13th time in 14 seasons.

The 2016 final between Coastal Carolina and Arizona was the only championship since 2008 that did not involve an SEC team.

Three championship series since 2011 have included two SEC teams. Texas A&M is still alive on the other side of the bracket, which keeps open the possibility of another all-SEC final this year. The Aggies will play an elimination game against Notre Dame this afternoon.

Arkansas fell to 3-7 all-time against SEC teams at the College World Series, including 2-5 since the Razorbacks joined the league.

The visitors have emerged as winners in six of the eight games played in Omaha, including both games on Monday.

All of the lower seeds -- Oklahoma, Notre Dame, Arkansas and Ole Miss -- won the first-round games and Auburn and Ole Miss won games as visitors on Monday.

The only games won by the home teams came on Sunday, when Texas A&M stayed alive with a win over Texas and Oklahoma advanced to the Bracket 1 final with a win over Notre Dame.

The overall attendance is 19,320 ahead of last year's pace and is the most through four nights since 2005.

Arkansas' Cayden Wallace worked a nine-pitch walk to open the Hogs' third inning, but he didn't last long at first base.

Ole Miss lefty Hunter Elliott made a crafty pick-off move that caught Wallace leaning off the base and Tim Elko applied the tag for umpire Adam Dowdy to call him out. The play was not reviewed.

Faces in the crowd

Auburn basketball Coach Bruce Pearl was in the crowd and interviewed by the in-house social media team during the Tigers' 6-2 win over Stanford in Monday's opener.

The starting pitchers on Monday night -- Arkansas' Zack Morris and Ole Miss' Hunter Elliott -- are both connected to Cabot.

Morris graduated from Cabot High. Elliott is from Tupelo, Miss., but his father Wally is a 1989 graduate of Cabot High.

Noland is one of three finalists, along with Iowa's Ben Beutel and Houston's Jaycob Beese. Moore is in competition with Central Michigan's Mario Camilletti and Coastal Carolina's Matt McDermott.

Moore has two errors in in 246 chances for a .992 fielding percentage. Moore has 91 putouts and 155 assists, second on the team behind Jalen Battles' 164.

Noland has a perfect fielding percentage on 21 chances, with 5 putouts and 16 assists, highest among the Razorbacks' pitchers. Noland has taken three batted balls off his body and thrown out the runners during the NCAA Tournament, including two in a win over Grand Canyon.

Other finalists from the SEC were LSU outfielder Dylan Crews and Kentucky shortstop Ryan Ritter.

Former Ole Miss star Chris Coghlan spoke to the Rebels the night before the College World Series and shared some insight into playing on the big stage.

Coghlan was the National League Rookie of the Year in 2009 for the Miami Marlins and played for parts of nine seasons, including with the World Series champion Cubs in 2016. He had a career MLB batting average of .258 with 53 home runs and 234 RBI.

The Rebels are clearly playing aggressive and loose, going 2-0 in Bracket 2 to join Oklahoma as the only unbeaten teams in Omaha.

For the first time in 10 NCAA Tournament games Stanford did not allow a run within the first three innings behind starter Drew Dowd, who shut Auburn out through four innings on three hits and a walk.

The Tigers roughed up Stanford ace Quinn Mathews for six runs in the fifth and sixth innings en route to their 6-2 win.

Fans in the left-field stands had a problem with their beach balls, partially due to the 22 mph winds blowing in from center field.

At least 10 of the balls blew over the wall and onto the playing surface, causing numerous stoppages in play, with field workers hustling to retrieve them.