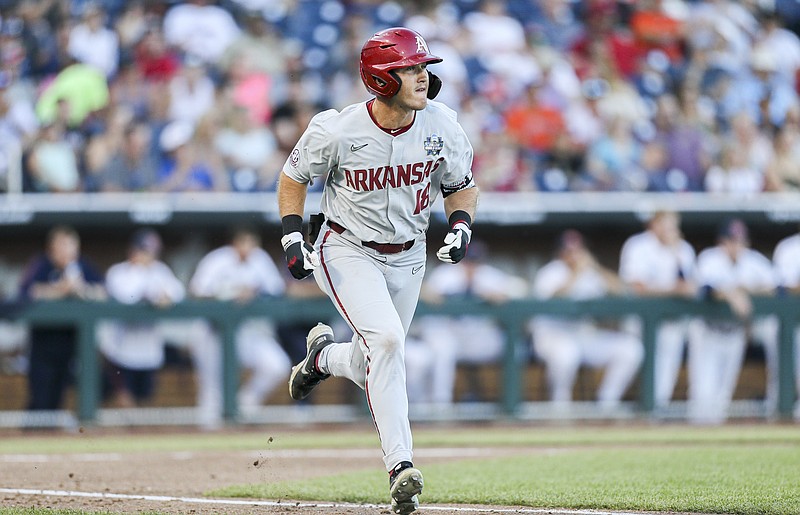 OMAHA, Neb. -- Will McEntire fired a seven-inning masterpiece and Peyton Stovall outhit Auburn on his own with a career-high five hits as the Arkansas Razorbacks bludgeoned Auburn 11-1 to stay alive at the College World Series on Tuesday.

McEntire struck out a career-high nine batters to lead the University of Arkansas to its second win by 10-plus runs at the CWS before a crowd of 24,636 at Charles Schwab Field. Stovall, moved to the two spot in the batting order, broke the UA single-game hit record in Omaha with a 5-for-6 showing, one more hit than the Tigers managed against McEntire and two relievers.

"Fastball, curveball, cutter, change-up, and all for strikes," Turner said. "Whenever you've got a four-pitch mix like that and you're throwing them all for strikes, it's a pretty good game plan for sure."

Added Auburn shortstop Brody Moore, "He had all his pitches working for him, and wherever Turner put his glove he was throwing it there."

Arkansas (45-20) advanced to the Bracket 2 finals, where the Razorbacks will have to defeat Ole Miss twice to advance to the championship series. The teams will square off at 6 p.m. today, with the game set for broadcast on ESPN.

The Razorbacks (45-20) advanced to the national semifinals for the sixth time in school history and the fourth time since 2009.

Nicknamed "Big Game Mac" by his American Legion Coach Darren Hurt in Bryant, McEntire lived up to that billing by opening with 3 2/3 hitless innings and quelling the Auburn offense on three hits.

"I just knew the team needed somebody to step up and I wanted to be that guy," McEntire said on ESPN.

Later, he credited Turner for being "a really good pitch caller."

McEntire (2-2) took a 9-0 lead into the seventh before allowing a solo home run to outfielder Bobby Peirce, his 10th. His previous career high in strikeouts had been five, and he surpassed that by striking out the side in the second and third innings alone.

"He's been throwing lights out, so he was very impressive," said Arkansas outfielder Chris Lanzilli, who launched a 416-foot home run to make it 8-0 in the fifth.

Zebulon Vermillion worked a four-pitch eighth inning and Austin Ledbetter wrapped it up by inducing a game-ending double play for the Razorbacks.

McEntire, a sophomore right-hander, drew plenty of run support, with the Razorbacks erupting for six extra-base hits, including five doubles, among their 16 hits to bash an array of Auburn pitchers.

Auburn (43-22) dropped to 4-11 in its College World Series history, losing its games in Omaha to SEC West foes Arkansas and Ole Miss.

"Arkansas was just engaged," Auburn Coach Butch Thompson said. "It's like you just can't allow them to keep getting extended at-bats. And we were trying to put them away but they were fortunate; a lot of things fell for them, but when the inning got extended they had the big hit to go with it. That wound up to be too much for us today."

Van Horn swapped the eight-hole hitter Stovall with Brady Slavens in the two spot and the freshman Stovall finished 5 for 6, driving in the game's first run and playing a leading role in four different run-scoring rallies.

Possibly the hottest-hitting team in Omaha, Arkansas increased its batting average to .363 through three games at the CWS.

Lanzilli hit a towering two-run home run, his second in Omaha, in the Razorbacks' four-run fourth inning and went 3 for 5. Turner went 3 for 4, scored 2 runs and drove in 3.

Braydon Webb and Robert Moore had two hits apiece for the Hogs.

Arkansas got busy early against Auburn right-hander Mason Barnett (3-3), forcing him to throw 33 pitches in the first inning, his second-highest total of the year behind a 39-pitch first inning against South Alabama on March 22.

Webb didn't waste any time, lacing Barnett's first pitch deep to the gap in left center for a double. Stovall worked a full count before driving a grounder right back over the mound to bring Webb home. Turner also battled Barnett for 12 pitches before grounding out to further drive his pitch count.

The Razorbacks pieced together a three-run third inning and benefited by a sun-aided hit to left field to drive Barnett out of the game.

Auburn's Mike Bello could not see Stovall's liner in the sun and it fell for a one-out single to left. Turner drew a one-out walk and Lanzilli's hot-shot single eluded the glove of first baseman Sonny DiChiara with Turner shielding his view to score Stovall.

Moore worked a 3-2 count before uncorking an opposite-field double deep down the left-field line to up the Hogs' lead to 4-0.

The Razorbacks doubled their lead again win the fourth, turning the game into an 8-0 romp.

Webb started that uprising with a one-out single and Stovall chased him to third with a double. Turner drove a ball off the right-field wall to bring home both runners and make it 6-0.

Lanzilli followed with a high-arcing shot just inside the left-field foul pole that was 106 mph off the bat and flew an estimated 416 feet.

Cayden Wallace hit a double with 112 mph exit velocity with two outs in the sixth inning and scored on Turner's single.

Stovall capped his big night with a two-run, two-out single in the ninth inning, driving in Moore and Jalen Battles, who had reached on a single and a walk to lead off the inning.