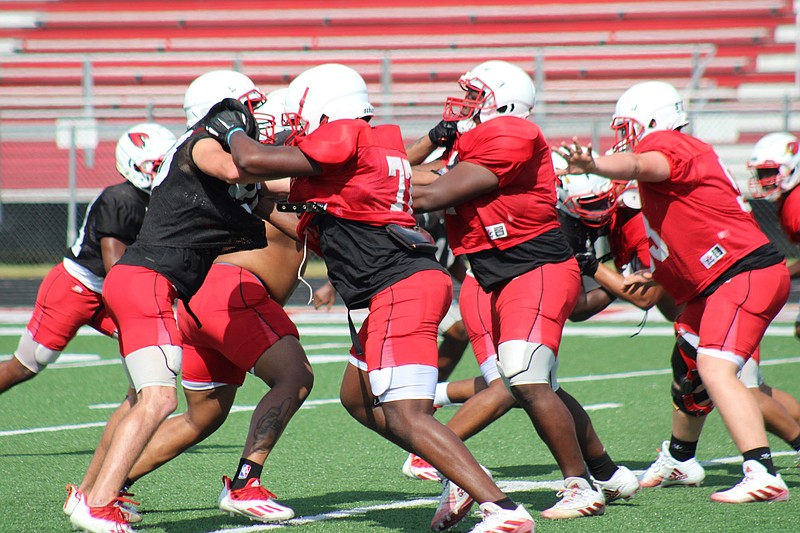 Photo By: Michael Hanich The offensive line for the Camden Fairview Cardinals blocking the defensive line in practice.

The Camden Fairview Cardinals have taken extensive measures to locking in staff that will help them remain a conference championship winning team.

The program has been slowly securing their key coaching staff for the upcoming 2022 high school football season. On Tuesday, the program finalized a deal to hire Johnny Gibson Jr. as the Cardinals' new offensive line coach.

Gibson may be new to the coaching scene, but he is no rookie when it comes to the offensive line. Gibson, a Dumas High School graduate, was a three-year starter for the Arkansas Razorbacks until his graduation from the University in the spring of 2019. He was one of the most efficient and best all-around offensive linemen for the Razorbacks.

After playing in three games as a redshirt freshman in 2015, Gibson stepped up to be a reliable reserve in 2016 until he started at right guard in the final five games of the season.

Gibson went on to be signed by the Philadelphia Eagles an undrafted rookie in the 2019 NFL off-season. He spent two months with the Eagles participating in rookie mini-camps and OTA's learning under run-game coordinator/offensive line coach Jeff Stoutland. Although he didn't make it to the Eagles' training camp, he learned a lot of the systematics and coaching styles from the NFL.

Gibson is more than ready to continue the long line of successful offensive linemen at Camden Fairview. Last year, Gibson helped coach and develop players at the semi-pro level with the Arkansas Punishers.

Gibson said he is impressed with the offensive line the Cardinals have going into the 2022 season. He has already met with his players, as the team will return two starters in center Landon Morgan and guard Jeremy Whitney. They will also be led by juniors in offensive tackle Chris McCoy and guard Shamarion Walker, who have stepped into the number one spots with assertiveness.

"The first time I met the boys, the offensive line, there is good size across the board. Pretty good guys and pretty smart guys as well. I was surprised by how smart they were. There are certain things that's in the playbook that you have to know what's going on and to effectively run the play and they pick it up quickly; they ask questions. The potential they have is high. All they need is a few tweaks here and there and all of those guys are pretty young as well. It's all about them just soaking up the knowledge that I'm going to give and the sky is the limit for them," Gibson said.

His experiences on-the-field with Arkansas and then with the Philadelphia Eagles have enabled him to be someone who wants to coach the offensive line and coach them right.

"While I was there at Arkansas, I had three different offensive lines, which means three different sets of philosophies and techniques. Being able to take from playing with the little time I spent in Philly with the offensive line, so that's four different offensive line coaches at different levels and then being able to combine those and pick and choose what I think would be the best is going to get me to the point where I could coach the o-line well and get them in a position they can compete to where the offense can perform how it needs to perform," he said.

Gibson said he is ready to take the years of learning at the highest levels to coach a position group that is critical to the offense. Gibson said he believes it all starts up-front with the o-line.

With just a little over two months left until the start of the 2022 season, the Cardinals feel even more confident with their ability to win in the trenches. These young starters have potential and Gibson is ready to turn them into stars like the program has for years.