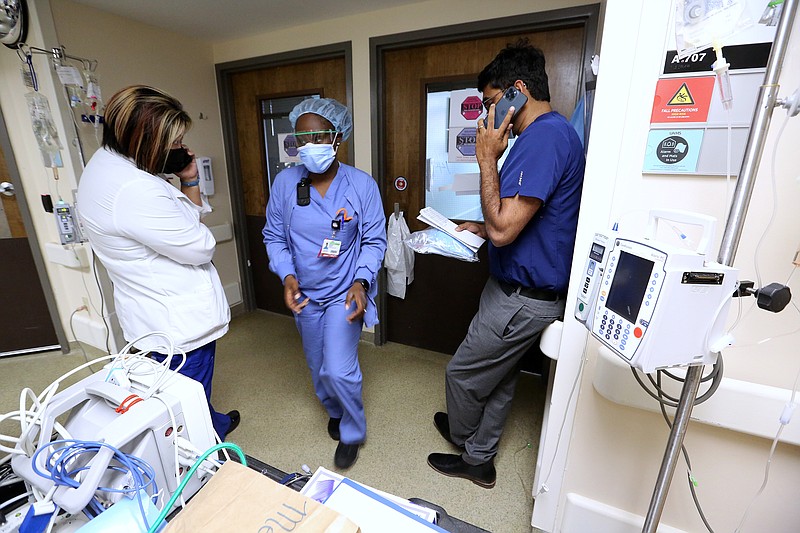 Dr. Ramakrishna Thotakura (right) talks on the phone as nurses Kia Kandlbinder (left) and Brionna Rivers (center) get equipment ready for a patient in one of the Covid wards at University of Arkansas for Medical Science on Thursday, July 22, 2021, in Little Rock. .(Arkansas Democrat-Gazette/Thomas Metthe)

Arkansas' death toll from the coronavirus rose Thursday by 50 -- the second-highest one-day increase in more than a year -- as the number of patients hospitalized with covid-19 in the state fell to its lowest level since November.

Meanwhile, reflecting the state's declining new cases and hospitalizations, the Arkansas counties where the U.S. Centers for Disease Control and Prevention recommends people wear masks in indoor spaces dropped Thursday from 42 to 16.

But masks are no longer considered essential in Sebastian, Craighead and Garland counties, where the level changed from high as of late last week to low or medium on Thursday.

Arkansas' coronavirus death toll, as tracked by the Department of Health, rose Thursday to 10,661.

It was just the second time since January 2021 that the state had recorded 50 or more covid-19 deaths in a single day.

The other was Tuesday, when the state's toll rose by 55.

Dr. Jennifer Dillaha, the Health Department's chief medical officer, said 29 of the deaths reported Thursday happened within the past month.

Of the others, 20 were in January, and one was in late December.

During the surge driven by the delta variant last summer, the largest one-day increase was the 45 deaths reported on Aug. 24.

Already above the level it reached during the delta surge, the average number of deaths reported each day over a rolling seven-day period rose Thursday to 40, which is still down from a recent high of about 43 a day the week ending Feb. 17.

Because of reporting delays and the amount of time it can take someone to succumb to complications from covid-19 after being infected, health officials have said the number deaths reported each day in Arkansas is likely to remain high for some time even as the state's new case numbers decline.

Dropping for the sixth day in a row, the number of covid-19 patients in the state's hospitals fell Thursday by 22, to 410, its lowest level since Nov. 30.

Until last week, the CDC had recommended wearing masks in areas with "substantial" or "high" levels of virus transmission.

That covered more than 95% of U.S. counties, including all of Arkansas.

The new guidance factors in hospital admissions and hospital capacity, along with new cases, to determine whether mask-wearing is recommended.

When the guidance was unveiled last week, 42 of Arkansas' 75 counties, encompassing 60% of the state's population, were labeled as having "high" covid-19 levels, meaning masks were still advised.

The number with that label fell to 16, representing about 21% of the population, on Thursday, when the CDC released updated levels based on cases and hospitalizations over the past week.

Nationwide, the percentage of people living in a county where mask-wearing is recommended fell Thursday from about 28% to 7%.

The recommendation to wear masks had already been lifted last week in Washington, Benton, Jefferson and Pope counties, which were listed as having a "medium" covid-19 level. On Thursday, the level in those counties was downgraded to "low."

Altogether, the number of Arkansas counties labeled as having a low covid-19 level rose from three last week to 38, while the number with a medium level fell from 29 to 21.

Jackson County, which wasn't assigned a label last week due to unavailable data, was listed as having a medium covid-19 level on Thursday.

Two counties, Ouachita and Calhoun, went from being listed as having a medium level last week to a high level on Thursday.

Pulaski, Faulkner, Saline and Lonoke counties continued to be listed as having a high level because of the number of hospital admissions in a nine-county area that includes those four counties.

During the week ending Tuesday, the admissions translated to a rate of about 21 per 100,000 residents, which was just above the threshold of 20 per 100,000 that causes a county to be listed as having a high covid-19 level regardless of its number of new cases.

The four-county service area that includes White County had about 18 admissions per 100,000 residents.

White County continued to be labeled as having a high covid-19 level, however, because it also had 208 new cases per 100,000 residents over the past week.

Arkansas' statewide count of cases rose Thursday by 481, which was smaller by 78 than the increase a day earlier and by 90 than the one the previous Thursday.

The average daily increase in the state's case count over a rolling seven-day period fell to 560, its lowest level since the week ending Nov. 30.

With recoveries and deaths outpacing new cases, the number of cases in the state that were considered active fell by 362, to 4,100, the smallest number since June 30, when the delta surge was just starting.

The number of the state's virus patients who were on ventilators fell by one, to 68, its second straight daily decline.

The number as of Thursday was still above a recent low of 60 that it reached on Sunday, however.

Falling for the sixth straight day, the number in intensive care dropped by 11, to 126, its lowest level since Nov. 18.

Due to declining demand, the University of Arkansas for Medical Sciences later this month will close a vaccine clinic and a drive-thru testing site in Little Rock, UAMS spokeswoman Leslie Taylor said Thursday.

She said the vaccine clinic, on Monroe Street, will close on March 18. The testing site at UAMS Medical Center will close a week later, on March 25.

She said UAMS will offer testing by appointment at the Monroe Street location, which the hospital will also use for routine covid-19 testing for patients scheduled for surgery.

Vaccines will be available at other UAMS clinics, Taylor said.

About 80 to 120 people a day have been getting tested at the drive-thru site, down from more than 800 a day in mid-January, she said.

At the Monroe Street clinic, an average of about 40 people a day have been receiving shots.

"We don't need to have the large public clinic open anymore," Taylor said.

"Folks can get it from their doctors' offices."

Two other patients had died in the past 24 hours, she said.

The patients in the hospital on Thursday included four who were in intensive care, three on ventilators and one on a heart-lung bypass machine.

Eight of the 26 patients had been fully vaccinated, she said.

"It just wasn't sustainable to continue operating it as-is," he said.

He said vaccines continue to be available through St. Bernards' primary care and urgent care clinics.

The hospital also has a dedicated vaccine clinic on Friday mornings at its internal medicine residency clinic.

The patients on Thursday included two who were in intensive care and one on a ventilator.

"We're keeping our fingers crossed that we don't have another wave to come through, that maybe we do get some sort of a reprieve," Nail said.

"Whether that's lasting or not, it's important for [health care workers] to be able to take a moment to gather themselves after such a high influx of patients. I know they're ecstatic every time they can close a covid area."

At its 11 hospitals across the state, Baptist Health has "seen a steady decline of patients hospitalized with COVID-19 since our highest of 368 on Jan. 25," with the number falling to 110 as of Thursday, spokeswoman Cara Wade said in an email.

She said 32 of the patients on Thursday were in intensive care, and 21 were on ventilators.

About 16% of the 110 patients were fully vaccinated and had received a booster shot, she said. An additional 15% had been vaccinated but not boosted.

At its drive-thru testing site, Baptist Health Medical Center-Little Rock tested 53 people on Tuesday and 78 on Wednesday -- "a significant drop since our highest day on Jan. 5 with 1,726 people driving through the testing site," Wade said.

"Though the demand has slowed, we continue to remain open for now seven days a week from 7 a.m. to 3 p.m.," Wade said.

Noting the decline in covid-19 patients at UAMS Medical Center, Chancellor Cam Patterson said in a series of tweets Thursday that he was "starting to feel optimistic."

"The impact of this virus is still profound, and we grieve with the families of all those who have died during the pandemic," Patterson said.

"Still, this does seem like a moment to be thankful and to have some degree of optimism for the future."

Although UAMS experts predict new variants will cause future surges of cases, "there's reason to believe those surges will become less severe over time than those we faced in the past," Patterson said.

"Experts across the country and around the world share this opinion, but none of us have a crystal ball," he said.

"I suspect we are in a transitional moment and that the doors for a more normal way of going about our business are starting to open just a little bit."

He added that it's still important to "take steps to protect the most vulnerable among us and to practice good common sense," and that vaccination is the best way people can protect themselves and others.

Craighead County had the most new cases, 60, on Thursday, followed by Pulaski County with 59 and Washington County with 31.

The Health Department's tally of vaccine doses that had been administered rose by 1,840, which was down by 30 compared to the daily increase a week earlier.

Booster shots made up 34% of the most recent increase.

The count of first doses rose by 513, which was smaller by 212 than the increase in first dose a week earlier.

Already at its lowest level since the Health Department started regularly releasing daily vaccination numbers in January 2021, the average number of total doses administered each day over a rolling seven-day period fell to 1,445.

The average for first doses, also already at a record low, fell to 439.

According to the CDC, 65.8% of Arkansans had received at least one dose as of Thursday, a percentage that hadn't changed since a day earlier.

The percentage who had been fully vaccinated rose from 53.5% as of Wednesday to 53.6%.

Of those who were fully vaccinated, 37.9% had received a booster shot as of Thursday, up from 37.8% a day earlier.

Nationally, 76.4% of people had received at least one dose, and 65% were fully vaccinated.

Of the fully vaccinated population nationally, 43.9% had received a booster dose.