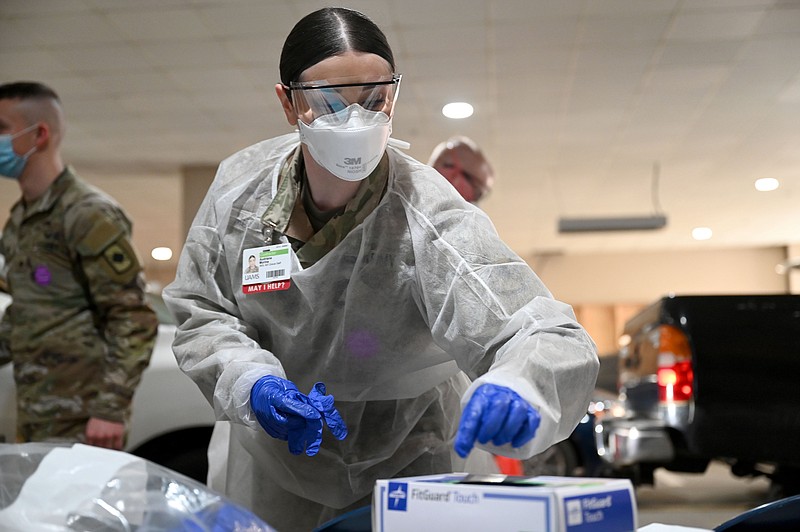 Audriana Morina, with the Arkansas Army National Guard, replaces her gloves between tests as she and 12 other soldiers help with demand at the drive-thru screening site at UAMS on Tuesday, Jan. 4, 2022. Gov. Asa Hutchinson visited the medical campus to welcome the 12 Arkansas National Guard soldiers, who arrived yesterday. See more photos at arkansasonline.com/15uams/..(Arkansas Democrat-Gazette/Stephen Swofford)

The decline in the numbers of covid-19 patients in hospitals, in intensive care and on ventilators in Arkansas stalled on Friday, with the number hospitalized rising for just the third time since it reached a record high in late January.

Meanwhile, the state's death toll from the virus, as tracked by the Arkansas Department of Health, rose by 20, the smallest daily increase in deaths in more than a week.

With recoveries and deaths outpacing new cases, the number of cases in the state that were considered active fell by 419, to 3,681, the first time since June that it had been below 4,000.

Still down by more than three-fourths from its January peak, the number hospitalized rose Friday by two, to 412.

After falling the previous two days, the number of the state's virus patients who were on ventilators remained at 68.

The number in intensive care rose by five, to 131, after declining the previous three days.

Dr. Jennifer Dillaha, the Health Department's chief medical officer, said she didn't attach much significance to the one-day break from the downward trend in the state's hospitalization numbers.

She said she was "feeling pretty good" about the overall decline in hospitalizations and new cases from the peaks they reached in January during a surge of infections from the omicron variant.

"I'm hopeful that we'll be able to get down pretty low and have a nice spring and a hopefully good summer," she said.

"Of course that's what we hoped before, and we had surges, so I think we will just have to wait and see."

The rise in deaths, which brought the state's toll to 10,681, followed increases of 55 on Tuesday, 32 on Wednesday and 50 on Thursday.

Before Tuesday, the last time the state recorded 50 or more deaths in a single day was in January 2021.

The average daily increase in the death toll over a rolling seven-day period fell from 40 as of Thursday to 37, which was still above its peak last summer during a surge of infections from the delta variant.

The state's count of cases rose Friday by 485.

That was larger by four than the increase a day earlier and 162 more than the previous Friday, when the state's new cases were likely affected by a reduction in testing due to a winter storm that hit the state.

The average daily increase in the state's case count over a rolling seven-day period rose Friday to 583, which was still down from an average of almost 740 a day a week earlier.

Already at its lowest level since the school year started in August, the number of active cases among public elementary and secondary school students and employees fell by 138, to 404, from Monday to Thursday, according to Health Department reports.

Over the same period, the number of the state's 261 public school districts and charter school systems with five or more active cases fell by seven, to 23.

At private schools, the number of active cases among students and employees fell by 14, to 26, from Monday to Thursday.

The largest number as of Thursday was at Our Lady of Holy Souls School in Little Rock, which had five. No other private schools were listed as having five or more active cases.

For privacy reasons, schools with fewer than five active cases aren't listed individually in the reports.

The Health Department's tally of vaccine doses that had been administered rose by 1,628.

That was larger by more than 400 from the daily increase a week earlier, when icy roads likely contributed to a downturn in vaccinations.

Booster shots made up 35% of the most recent increase.

The count of first doses rose by 485, which was larger by 56 than the increase in first doses a week earlier.

After reaching its lowest level since the Health Department started regularly releasing daily vaccination numbers in January 2021, the average number of total doses administered each day over a rolling seven-day period rose Friday to 1,506, which was still down from an average of almost 1,700 a day a week earlier.

The average for first doses, which had also been at a record low, rose to 447.

According to the U.S. Centers for Disease Control and Prevention, the percentage of Arkansans who had received at least one dose remained Friday at 65.8%, and the percentage who had been fully vaccinated remained at 53.6%.

Of those fully vaccinated, the percentage who had received a booster dose remained at 37.9%.

Nationally, 76.5% of people had received at least one dose, and 65.1% were fully vaccinated.

Of the fully vaccinated population nationally, 44% had received a booster dose.