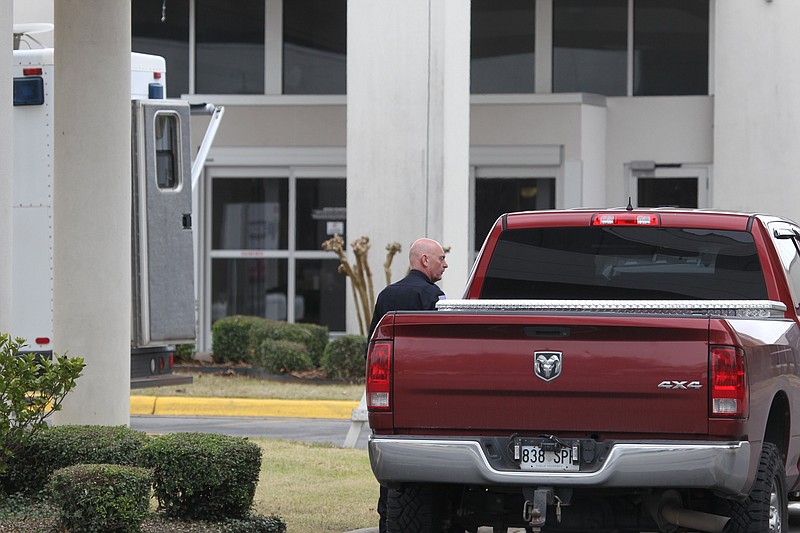 A Pine Bluff police officer stands outside the north entrance to Jefferson Regional Medical Center in this March 11, 2020, file photo. Police were stationed outside the north and south entrances to the hospital as medical personnel just inside the entrances screened visitors after a patient there was determined to have what was then considered a "presumptive" case of covid-19, the first such case of the coronavirus in Arkansas. (Arkansas Democrat-Gazette file photo)

The number of covid-19 patients in Arkansas hospitals fell below 300 for the first time in almost four months on Thursday -- almost two years after the state's first case was identified -- even as the decline in the state's new cases showed signs of stalling.

Down by almost 85% from the all-time high it reached in January, the number hospitalized fell by 27, to 280, its lowest level since Nov. 16.

On that day, the state had 276 covid-19 patients in its hospitals, which was the low point between the surge last summer powered by the delta variant and the one driven by the omicron variant that began in late December.

The state's count of cases rose Thursday by 519 -- the first daily increase in almost a week that was larger than one a day earlier.

"On the two-year anniversary of COVID-19's arrival in Arkansas, I suggest that we all take a moment to reflect on the human toll of this pandemic," Dr. Joe Thompson, chief executive of the Arkansas Center for Health Improvement, said in a statement Thursday.

"Each of the more than 10,000 deaths in our state has created a hole in a family someone's parent, someone's child, someone's sibling, someone's spouse. The overwhelming scale of the tragedy should not stop us from grieving for those we have lost."

While smaller by 24 than the one on Wednesday, the increase in cases on Thursday was larger by 38 than the one the previous Thursday.

Also breaking with the recent trend of sharp week-to-week declines, the 543 cases that were added Wednesday were only slightly fewer -- by 16 -- than the number added March 2.

"Our anticipation is that the overall trend will be down," she said.

Because omicron is so infectious, however, she said it's possible the new case numbers will bottom out at a higher level than they did after previous surges.

"I think that we have the potential for going lower" than the current level of new cases, she said. "We just have to wait and see."

She said 25 of the deaths reported Thursday occurred within the past month.

Of the others, 10 happened in January and two were in early February.

Among public elementary and secondary school students and employees, the number of cases that were active, representing people who have tested positive and are still potentially infectious, fell Thursday to 104 -- the smallest number since the Health Department began issuing reports on school-related cases in August 2020.

The number was down by almost half from the 205 listed in the department's previous update on Monday.

Between Monday and Thursday, no new cases among employees were reported, and just four were reported among students.

Only five of the state's 261 school districts and charter school systems had five or more active cases as of Thursday, down from 11 districts as of Monday.

For privacy reasons, schools with fewer than five active cases aren't listed individually in the reports, which are generally released twice a week.

Private elementary and secondary schools collectively had just two active cases among students and employees as of Thursday, down from eight as of Monday, according to the reports.

No new cases had been reported among private school students or employees since Monday.

The same day, the World Health Organization labeled the global outbreak of the virus as a pandemic, and then-President Donald Trump, who had already restricted travel from China, said he would place a similar suspension on travel from 26 European countries.

As the second anniversary of Arkansas' first case approached, some health experts in the state said the virus is still a concern, but the need for precautions, such as wearing a mask in public, has diminished for many people.

"As a community, as a state, as a nation, we're entering a different phase than we've been before," Thompson, the Center for Health Improvement CEO, said in an interview this week.

With cases and hospitalizations dropping from the levels they reached during the height of the omicron wave and vaccines and treatments available, he said the responsibility for responding to the virus has shifted from government to families and individuals.

"I think where we've moved to now, it's really an individual or families' risk assessment," Thompson said.

People who haven't been vaccinated, for instance, or who are at risk of severe complications from covid-19, may want to take precautions such as wearing a mask in public, he said.

On the other hand, "If you're relatively healthy and you've been boosted, I think you're as safeguarded as you can be," Thompson said.

Dr. Robert Hopkins, chief of the division of general internal medicine at the University of Arkansas for Medical Sciences, argued that easing up on precautions such as masking is "a bit premature."

"If we had most of our state highly vaccinated, and we had low rates of disease, I think taking that approach would be reasonable," Hopkins said, "but I think that we are in a high-risk situation in our state."

Before he would say people no longer need to wear masks, he said he'd want to see a greater decrease in the number of covid-19 patients in the state's hospitals, a higher percentage of Arkansans who are vaccinated and a percentage of the state's coronavirus tests that are positive below 5%.

Recently, the state has met that benchmark, with the percentage falling to 3.8% over the week ending Monday.

Dillaha and Mark Williams, dean of UAMS' Fay W. Boozman College of Public Health, said they agree with revised guidance from the U.S. Centers for Disease Control and Prevention that ties the need for most people to wear a mask to local transmission rates, hospitalizations and hospital capacity.

The guidance greatly reduced the number of counties in Arkansas and the rest of the country where the agency urges mask wearing.

Previously, the CDC had based its mask recommendations for the general public on the number of new cases and percentage of tests that were positive in a particular county.

"It's a balance between reducing the risk and carrying on life in a way that we're comfortable and accustomed to doing," Dillaha said.

"Of course, if we don't wear a mask, we do put ourselves at increased risk for any respiratory infection, and that is something people have to decide, whether that risk is worth it to them.

"When the spread of those respiratory pathogens is low, then it's reasonable not to wear a mask."

In the long term, Williams said health officials are hoping the pandemic is "going to play out like the 1918 flu pandemic, where it just sort of dies away."

But he said it could also be more like the "sweating sickness" that emerged as an epidemic in England several times in the 15th and 16th centuries.

He said the coronavirus "moves very, very easily, apparently, between animals and humans," increasing the potential for dangerous variants to arise.

The possibility of such variants emerging is all the more reason for people to be vaccinated, he said.

Vaccines were effective in preventing serious illness from omicron, he said, and "there's good reason to believe a future variant would also be susceptible to our current vaccines."

If more people had been vaccinated, "our hospital systems would have been much less threatened" during the delta surge last summer and the omicron surge, Williams said.

"People don't realize how close we've come on both of the big surges to breaking the hospital system in Arkansas," Williams said.

Hopkins, who is chairman of a federal advisory committee on vaccines, said he wouldn't be surprised if covid-19 eventually becomes a less worrisome disease, similar to the coronaviruses that now cause common colds in the winter.

"When we're going to reach that point, I think, is very difficult to say," Hopkins said.

He said many areas of the world have "even more dismal vaccination rates than Arkansas."

In addition, "we have a lot of people in our population that are immune suppressed, thus at high risk," he said.

"As long as we continue to see the virus replicating, there's the potential for another variant to emerge that does to us what omicron did to us," Hopkins said.

"I think if we back off [on precautions] before we see some consistent low rates of serious infection, then I think we're doing that at our own peril."

Thompson agreed that new variants, including ones that are more deadly or better able to evade the protection afforded by vaccines, could pose a threat.

At the moment, however, neither the World Health Organization nor the CDC "have such a variant of concern on their radar screen," he said.

"We don't see a hurricane coming at us right now, but one could blow up pretty quickly, and we would need to take action," Thompson said.

Craighead County had the most new cases, 62, on Thursday, followed by Benton and Crittenden counties, which each had 32.

After falling the previous five days, the average daily increase in the state's case count over a rolling seven-day period rose Thursday to 467, which was still down from an average of about 560 a day a week earlier.

With recoveries and deaths continuing to outpace new cases, the number of cases in the state that were considered active fell by 98, to 2,444.

While it brought the active case total to its lowest level since June 21, it was the first daily decline that was smaller than 100 in almost three weeks.

Already at its lowest level since June, the number of the state's virus patients who were on ventilators fell by one, to 50, after not changing a day earlier.

Dropping for the third day in a row, the number who were in intensive care fell by five, to 88, the smallest number since June 8.

The Health Department's tally of vaccine doses that had been administered rose Thursday by 1,484, which was smaller by 356 than the daily increase a week earlier.

Booster shots made up 32% of the most recent increase.

The count of first doses rose by 594, the second daily increase in first doses that was larger than the one a week earlier.

Already at its lowest level since the Health Department started regularly releasing vaccination numbers in January 2021, the average number of total doses administered each day over a rolling seven-day period fell to 1,317.

After reaching a new low two days earlier, the average for first doses rose to 445.

According to the CDC, the percentage of Arkansans who had received at least one dose remained Thursday at 65.9%, and the percentage who had been fully vaccinated remained at 53.7%.

The percentage of those fully vaccinated who had received a booster dose remained at 38.1%.

Nationally, 76.6% of people had received at least one dose as of Thursday, and 65.2% had been fully vaccinated.

Of the fully vaccinated population nationally, 44.2% had received a booster dose.