CDC: Masks no longer recommended in Arkansas except 2 southeast counties 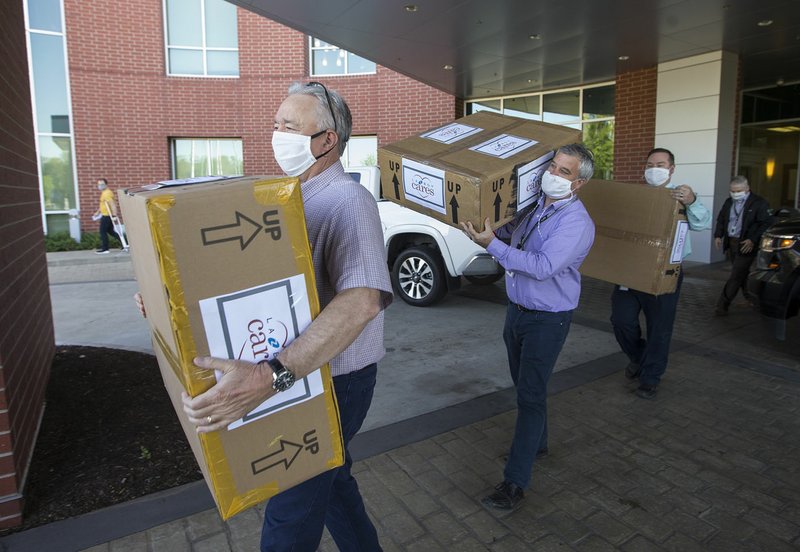 Mike Wilmon (from left), Paul Dilbeck and Neil Erter with La-Z-Boy unload boxes of masks at Siloam Springs Regional Hospital in this Wednesday, April 29, 2020, file photo. La-Z-Boy, who operates a plant in Siloam Springs, donated 10,000 masks to Northwest Health to be used at all five of the system's hospitals in Northwest Arkansas as well as their covid-19 testing centers. (Ben Goff/NWA Democrat-Gazette)

The number of Arkansas counties subject to a recommendation that residents wear masks in indoor public places fell from 16 to just two under the latest update to a U.S. Centers for Disease Control and Prevention map of "covid-19 community levels."

Ashley and Chicot counties, which had previously been labeled as having a "medium" covid-19 level, moved into the "high" category on Thursday night -- triggering the recommendation to wear masks -- as a result of an increase in coronavirus-related hospital admissions in their service area.

Meanwhile, 16 counties, including Pulaski, Faulkner, Saline, White and Lonoke, went from high to medium or low as their new cases and hospital admissions fell.

"I think that goes with the current trend that cases are coming down and hospitalizations are doing likewise," Dr. Jennifer Dillaha, the state Department of Health's chief medical officer, said Friday.

The CDC unveiled its guidance based on covid-19 community levels, which are updated weekly, late last month.

Previously, it had recommended wearing masks in areas with "substantial" or "high" levels of virus transmission.

As of late February, that covered more than 95% of U.S. counties, including all of Arkansas.

The new guidance factors in hospital admissions and hospital capacity, along with new cases, to determine whether mask-wearing is recommended.

When it was first announced, 32 of Arkansas' 75 counties were classified as having a low or medium level of covid-19, meaning masks were no longer considered essential for most people.

That number grew to 59 last week and 73, encompassing 99% of Arkansas' population, on Thursday night.

Of those 73 counties, 26 were labeled as having a medium covid-19 level.

In those counties, the CDC recommends people who are immunocompromised or at high risk of severe covid-19 talk to their health care provider about whether they should wear masks or take other precautions.

People in the medium-level counties should also consider wearing a mask around people who have a high risk of severe covid-19, according to the CDC.

In counties with a low covid-19 level, including 47 in Arkansas under the latest map update, the CDC doesn't have a recommendation about whether people should wear masks.

Regardless of the covid-19 level, people "can wear a mask based on personal preference, informed by personal level of risk," according to the agency's website.

Nationally, more than 98% of people live in counties where the CDC is no longer urging most people to wear masks, up from more than 90% before the latest update.

The guidance applies to schools, where the CDC had previously recommended universal masking regardless of the level of transmission in the surrounding community.

The Little Rock School Board on Thursday cited the new guidance in voting to make masks optional for students and employees starting Friday.

Under the district's new policy, masks will be required again if the covid-19 community level for Pulaski County goes back up to high.

The county's other public school districts had already dropped their mask requirements.

According to the Arkansas Center for Health Improvement's website, the Dermott and Lakeside school districts in Chicot County have partial mask requirements, meaning they apply to certain age groups or during certain activities, while the Crossett and Hamburg districts in Ashley County have no requirements.

During the week ending Tuesday, hospital admissions for covid-19 in the two counties, which share a health service area used to calculate covid-19 community levels, translated to a rate of 23.5 per 100,000, putting the counties just over the threshold of 20 per 100,000 that causes a county to be listed as having a high covid-19 level regardless of its number of new cases.

Hamburg Superintendent Tracy Streeter said her school board decided at the beginning of the school year not to require masks.

"I can't speak for them, but I don't see them reconsidering" in light of the county's new label on the CDC's map, Streeter said.

She said her district's covid-19 numbers have been "in line with those schools that have" had a mask requirement.

As of Friday, it had just one student, and no staff members, with an active infection, she said.

Statewide, two years after the state's first covid-19 case was identified, the number of people hospitalized with covid-19 in the state fell Friday to its lowest level in almost nine months.

The state's count of cases rose by 665, the second daily increase in a row that was larger than the one a week earlier.

Dillaha said, however, that all but two of the 216 cases added Friday in Garland County were "old reports," from before March, that had been faxed in by a laboratory.

She said the department's epidemiologists were looking into why the cases weren't added earlier.

"We don't know what happened -- whether we're just now seeing faxes that came in earlier or whether they were just recently sent," she said.

Near Garland County, Hot Spring County, with an increase of 32 cases, and Pike County, with 29, also ranked near the top for cases added on Friday.

Dillaha said some of those cases may have been from the same laboratory tied to the Garland County increase.

She said half the deaths reported Friday happened within the past month.

Of the others, one was in December, nine were from January and four were from early February.

It was the first time this year that the number had been below the low point it reached in November between the surge in cases last summer driven by the delta variant and the one powered by the omicron variant that began in late December.

The number of the state's virus patients who were on ventilators and in intensive care, already below their low points between those two surges, also continued falling on Friday.

The number on ventilators fell by one, to 49, its lowest level since June 15.

The number in intensive care fell by four, to 84, its lowest level since June 7.

The average daily increase in the state's case count over a rolling seven-day period rose Friday to 493, which was still down from an average of 583 a day a week earlier.

Already at its lowest level since June 21, the number of cases in the state that were considered active fell by 110, to 2,334, as recoveries and deaths outpaced new cases.

At its hospitals in Little Rock and Springdale, Arkansas Children's had four covid-19 patients on Friday, down from eight as of Tuesday, spokeswoman Hilary DeMillo said.

She said two of the patients on Friday were on ventilators.

All four were at least 5 years old, making them eligible for vaccination, but none had been fully immunized, she said.

Aside from Garland County, Pulaski County had the largest increase in cases, 46, on Friday, followed by Hot Spring and Pike counties.

Lonoke County had the next-largest increase, 25, followed by Benton County with 20.

The Health Department's tally of vaccine doses that had been administered rose by 1,398, which was smaller by 230 than the daily increase a week earlier.

Booster shots made up about 31% of the latest increase.

The count of first doses rose by 463, which was smaller by 22 than the increase in first doses a week earlier.

Already at its lowest level since the Health Department started regularly releasing vaccination numbers in January 2021, the average number of total doses administered each day over a rolling seven-day period fell to 1,284.

After rising the previous two days, the average for first doses fell to 442, which was slightly above the record low it reached three days earlier.

According to the CDC, the percentage of Arkansans who had received at least one dose remained Friday at 65.9%, and the percentage who had been fully vaccinated remained at 53.7%.

Nationally, 76.6% of people had received at least one dose, and 65.2% were fully vaccinated.

Of the fully vaccinated population nationally, 44.2% had received a booster dose.