Active cases of virus in Arkansas fewest since May ’20 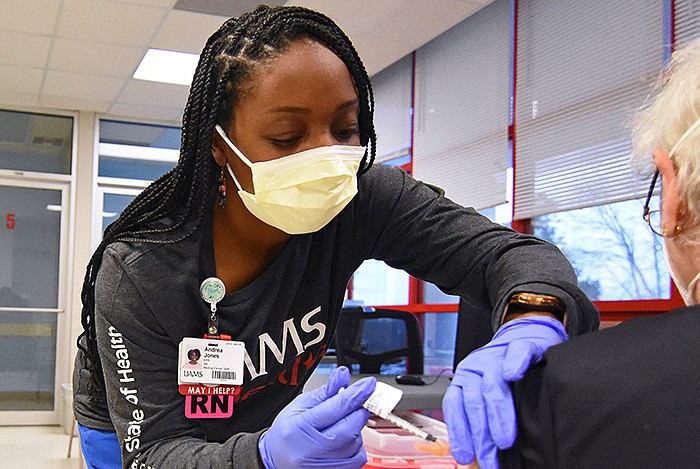 FILE — Andrea Jones, a registered nurse, administers a dose of the coronavirus vaccine Friday at the University of Arkansas for Medical Sciences vaccine clinic at the Monroe Building in Little Rock. The drive-thru site will close at 4 p.m. next Friday. Testing will be available by appointment only beginning March 28 at the Monroe Building. (Arkansas Democrat-Gazette/Staci Vandagriff)

Arkansas' number of active coronavirus cases, representing people who have tested positive within the past 10 days, fell on Friday to its lowest level since May 2020 as the number hospitalized with the virus dropped below 200 for the first time in nine months.

However, Dr. Jennifer Dillaha, the Health Department's chief medical officer, said only eight of the deaths reported Friday happened within the past month.

Of the others, one occurred in November, 11 were from January and three were from earlier in February.

Similarly, although the state's count of cases rose by 723, the biggest one-day increase in almost three weeks, Dillaha said only 91 of those cases were from people who tested positive in March.

The other 632 were from reports that had been faxed in by providers in January and February but only recently entered into a Health Department database as the department works through a backlog that built up during a surge of infections from the omicron variant.

Because they represent infections of people who have already recovered, the old cases don't affect the active case total, which has consistently fallen since it reached an all-time high of 102,576 on Jan. 22.

It was the first time this year the total had fallen below the low of 1,594 that it reached last year, on June 7, before a summer surge of infections from the delta variant.

Dillaha said the total has likely dropped so low because of the number of people who have some immunity, either from vaccination or infection, as well as precautions, such as mask-wearing and social distancing, taken by some people to avoid infection.

"Then there's just this element of the virus that we don't understand, how it behaves and circulates, to the degree that we would like," Dillaha said.

The availability of at-home tests has likely also contributed to the low active case numbers since the results aren't required to be reported to the Health Department.

The lull is likely to be temporary, however, with data from wastewater monitoring sites in the United States raising concerns that the country could see a resurgence of coronavirus infections within the next few weeks.

"The [United Kingdom] and Europe, we're usually a few weeks behind them, and they're already seeing increases," Dillaha said.

One Arkansas county, Dallas, didn't have any active cases for the second day in a row on Friday.

Three other counties, Lafayette, Monroe and Pike, each had just one.

Also on Friday, Dillaha said that, starting today, hospitals are no longer required to report their numbers of covid-19 patients to the Health Department on weekends and holidays.

She said she change was being made "to reduce the reporting burden on the hospitals."

"If we have a change in trend, we'll go back to" weekend and holiday reporting, Dillaha said.

Health Department spokeswoman Danyelle McNeill said most hospitals will likely still report their numbers this weekend. The Health Department's online covid-19 dashboard will be updated based on the information that is reported, she said.

Weekend updates to the hospital numbers on the dashboard will be "phased out," she said.

Dropping for the 14th day in a row, the number of people hospitalized in the state with covid-19 fell Friday by 21, to 183, its lowest level since June 7.

After rising a day earlier, the number of the state's virus patients who were on ventilators remained at 40.

The number in intensive care, which rose the previous two days, fell by six, to 64, the smallest number since April 24.

After falling the previous two days, the average daily increase in the state's total case count over a rolling seven-day period rose to 463, which was still down from an average of 493 a day a week earlier.

The Health Department's tally of vaccine doses that had been administered rose by 1,230, which was smaller by 168 than the daily increase a week earlier.

Booster shots made up about 34% of the most recent increase.

The count of first doses rose by 424, which was down by 39 compared to the increase in first doses a week earlier.

After rising a day earlier, the average number of total doses administered each day over a rolling seven-day period fell Friday to 1,129, which was still up from a record low of 1,117 a day the week ending Wednesday.

The average for first doses fell to 384.

According to the U.S. Centers for Disease Control and Prevention, the percentage of Arkansans who had received at least one dose remained Friday at 66%, and the percentage who had been fully vaccinated remained at 53.8%.

Of those fully vaccinated, the percentage who had received a booster dose remained at 38.3%.

Nationally, 76.8% of people had received at least one dose, and 65.3% were fully vaccinated.

Of the fully vaccinated population nationally, 44.5% had received a booster dose.

Print Headline: Active cases of virus fewest since May ’20