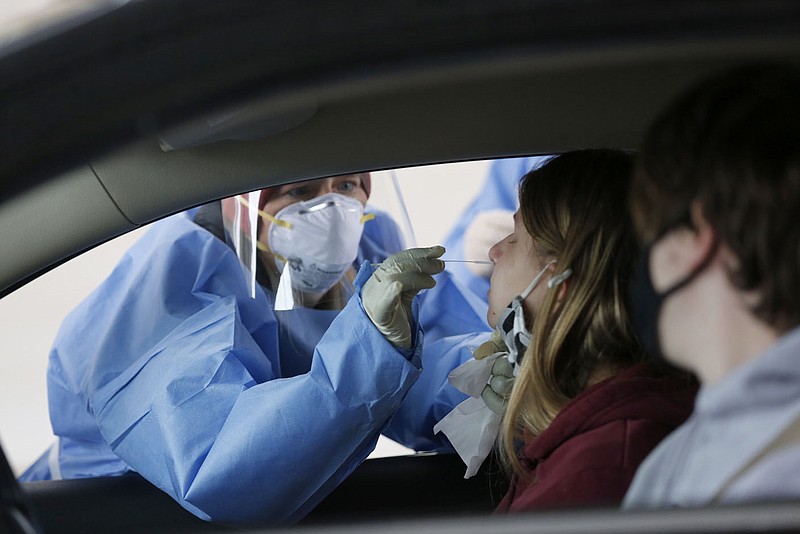 Jillian Brugger, a junior at the University of Arkansas, is tested for covid-19 Jan. 6, 2021, during a drive-up testing clinic hosted by the Arkansas Department of Health in the parking lot across from Baum-Walker Stadium at the corner of Razorback Road and 15th Street in Fayetteville. (File photo/NWA Democrat-Gazette/David Gottschalk)

Arkansas on Wednesday posted its smallest daily increase in coronavirus cases so far this year even as the number of people hospitalized with covid-19 in the state rose for the first time in more than two weeks.

The state's death toll from the virus, as tracked by the Arkansas Department of Health, rose by 25, to 11,152.

Despite a backlog of faxed-in test results that has inflated the state's new case numbers in recent days, it was the smallest one-day rise since Dec. 12.

State Epidemiologist Mike Cima said about 40% of the 249 cases were from tests that were performed in January or February but only recently were entered into a Health Department database as it works to clear out the backlog that built up during a surge of infections from the omicron variant.

He said the last of the positive results from the backlog were entered into the system Tuesday night and were reflected in the increase reported Wednesday.

The Health Department hoped to get the more than 30,000 negative results that remained as of Wednesday entered by the end of the week, he said.

When looking at cases by the date the test was performed, rather than when it was entered into the system, the state has been averaging about 100 new cases a day for "about a week now," Cima said.

"The overall numbers continue to look favorable," he said.

"It's clear that we're in a period of low transmission."

After rising by 74 on Tuesday, the number of cases in the state that were considered active, representing people who have tested positive and are still potentially infectious, fell Wednesday by 11, to 1,488.

The number of virus patients in the state's hospitals, which fell to its lowest point since 2020 on Tuesday, rose Wednesday by seven, to 146.

That put the number back above the low of 141 that it reached last year, on April 8.

Since it peaked at an all-time high of 1,819 on Jan. 26, it was just the fourth day the number had risen rather than fallen. The last increase was on March 4, when the number rose by two.

"We're keeping an eye on it," Cima said of the increase on Wednesday.

"What piques our interest is when we have some sustained increases," he said.

He said only nine of the deaths reported Wednesday happened within the last month.

Of the others, nine occurred in January, and seven were from early February.

After falling by four a day earlier, the number of the state's virus patients who were on ventilators rose Wednesday by one, to 37.

The number who were in intensive care remained Wednesday at 55, its lowest level since April 19.

At its hospitals in Little Rock and Springdale, Arkansas Children's had six covid-19 patients on Wednesday, including one who was on a ventilator, spokeswoman Hilary DeMillo said.

She said all of the patients were at least 5 years old, making them eligible for vaccination, but only two had been fully immunized.

The Health Department's tally of vaccine doses that had been administered rose by 1,418, which was larger by 135 than the daily increase a week earlier.

Booster shots made up about 38% of the most recent increase.

The count of first doses rose by 531, which was up by 143 from the increase in first doses a week earlier.

After falling the previous three days, the average number of total doses administered each day over a rolling seven-day period rose Wednesday to 1,184, which was up from a record low of 1,117 a day a week earlier.

The average for first doses rose to 431.

According to the U.S. Centers for Disease Control and Prevention, the percentage of Arkansans who had received at least one dose remained Tuesday at 66.1%, and the percentage who had been fully vaccinated remained at 53.9%.

The percentage of those fully vaccinated who had received a booster dose remained at 38.4%.

In the percentage who were fully vaccinated, it remained roughly tied with Tennessee for 45th, ahead of Idaho, Louisiana, Mississippi, Wyoming and Alabama.

Nationally, 76.8% of people had received at least one dose as of Wednesday, and 65.4% were fully vaccinated.

Of the fully vaccinated population nationally, 44.6% had received a booster dose.