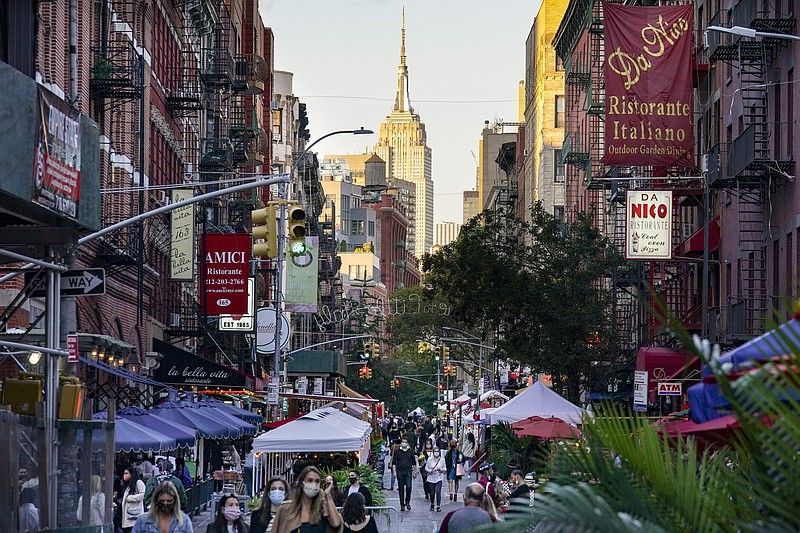 FILE - People walk through an area where restaurants operate outdoor spaces for dining that spread onto sidewalks and streets as part of continued COVID-19 economic impact mitigation efforts, Saturday, Oct. 3, 2020, in New York. As New York City forges ahead with its recovery, the pandemic is leaving lasting imprints, especially on city roadways: less room for cars and more space for people. (AP Photo/John Minchillo, File)

NEW YORK -- As COVID-19 ravaged New York City, virus-wary denizens locked out of indoor public places poured into the streets, sidewalks and parks. They dined with friends in outdoor sheds hastily erected by restaurants, and went to health classes, concerts and even therapy sessions on streets closed to traffic.

Now as the city continues on its path of recovery, the pandemic could be leaving a lasting imprint on how the city uses its roadways: More space for people and less room for cars.

Even though indoor dining has resumed in the city -- no masks or vaccine cards required -- outdoor dining decks, set up in former parking lanes, have never been more plentiful.

Meanwhile, the city is expanding its Open Streets program, which closes roadways to vehicles and opens them to pedestrians.

The expansion of the program -- originally conceived as a way to give New Yorkers more space to exercise -- is partly intended to increase foot traffic along struggling business corridors and give lower-income neighborhoods similar opportunities as higher-profile and wealthier enclaves.

"There have been a lot of closings of things during COVID. There are sections of blocks where there's lots and lots of empty storefronts, and that's depressing," said Maura Harway, who lives in Manhattan's Upper West Side. "So anything that brings people back and helps the businesses and helps the neighborhood to feel alive and lively."

New York's streets -- once places where kids played stickball -- were turned over nearly completely to vehicles in the automobile age, except for the occasional summer street fair.

But for years, some city leaders have sought to "reinvent and repurpose the use of our streets," said the city's transportation commissioner, Ydanis Rodriguez, who wants more neighborhood promenades for outdoor gatherings or give safe spaces where parents can teach children how to roller blade, toss a ball or ride a bike.

"The message to all New Yorkers is that our space is their space -- that our streets don't belong to car owners only," said the commissioner, who oversees both the Open Restaurants and Open Streets programs.

That rethinking began before the pandemic. Two decades ago, former Mayor Michael Bloomberg oversaw a major expansion of bike lanes and allowed bike rental stations to be set up on city streets. He championed pedestrian plazas like those in Herald Square and Times Square to keep cars out of pedestrian-heavy corridors. And his administration extended waterfront greenways and parks, especially in Manhattan and Brooklyn.

Mayor Bill de Blasio followed his predecessor's lead and put more measures in place to control and slow vehicular traffic. He also pushed, like Bloomberg, for a system that would charge tolls to drive in a large swath of Manhattan.

Spurred by a traffic accident that killed a 15-year-old girl in the first days of his tenure, the current mayor, Eric Adams, vowed to continue "recapturing space for pedestrians."

Among the legacies of the pandemic could be the remaking of the city's food culture by permanently expanding it from the confines of indoor dining to eating en plein air, giving curbsides a bit of Parisian flair.

Before the pandemic, 1,200 establishments had permits to set up tables and chairs on sidewalks. But under the pandemic era's emergency Open Restaurants program, more than 12,000 eateries and bars got permission to extend service into the streets.

New York City officials and restaurateurs alike say that the outdoor dining shacks helped lure diners back to restaurant tables and helped save the jobs of more than 100,000 workers.

Carmen Ortiz, who manages Il Violino, an Italian restaurant in the Upper West Side, is counting on the city's efforts to boost pedestrian traffic to generate more customers after many months of hardship for restaurateurs and their employees.

Ortiz recently returned from a trip to Italy, where she saw lots of folks dining in the sunlight.

"But most of those dining outdoors, they were eating in the sidewalks," she said. "I didn't really notice that they were like in the middle of the street like here."

For now, the city's reimagining of outdoor dining remains in flux because of legal challenges by some community activists and residents who balk at the loss of parking spaces -- at least 8,500 spaces in a city where real estate has always been a valuable commodity, whether it be for cars or otherwise.

Critics say the sheds attracted vermin and too many noisy patrons deep into the night -- perhaps a sign of recovery for some but an annoyance for others.

"We now have the restaurants on the streets and on the sidewalks," said Judith Burnett, whose apartment windows face Columbus Avenue, in an area lined with restaurants and again will soon be closed to traffic on Sundays.

While she called the initial move to help restaurants a "brilliant way to help people save their businesses," she's now ambivalent if things should stay that way. She doesn't want traffic permanently slowed, including the buses she rides.

"It tangled up so much traffic," Burnett said.

City officials say they took those complaints into account when developing new standards.

"Out of all the doom and gloom from the pandemic, one of the bright spots is that it allowed us to reimagine our relationship with the public space -- and that's everything from open restaurants to open streets," said Andrew Rigie, the executive director of the New York City Hospitality Alliance, the trade group for pubs and eateries.

He called outdoor dining a "natural progression," accelerated by necessity and allow New Yorkers to "enjoy the city in a way they may not have prior to the pandemic."

Harway, the Upper West Side resident, also called it progress.

"I never particularly liked to eat on the street in New York before the pandemic. It seemed noisy or dirty," she said. "With everybody eating outdoors at all the restaurants now, it's become more integrated into the life of the city -- maybe that's what it's like in Paris or Madrid." 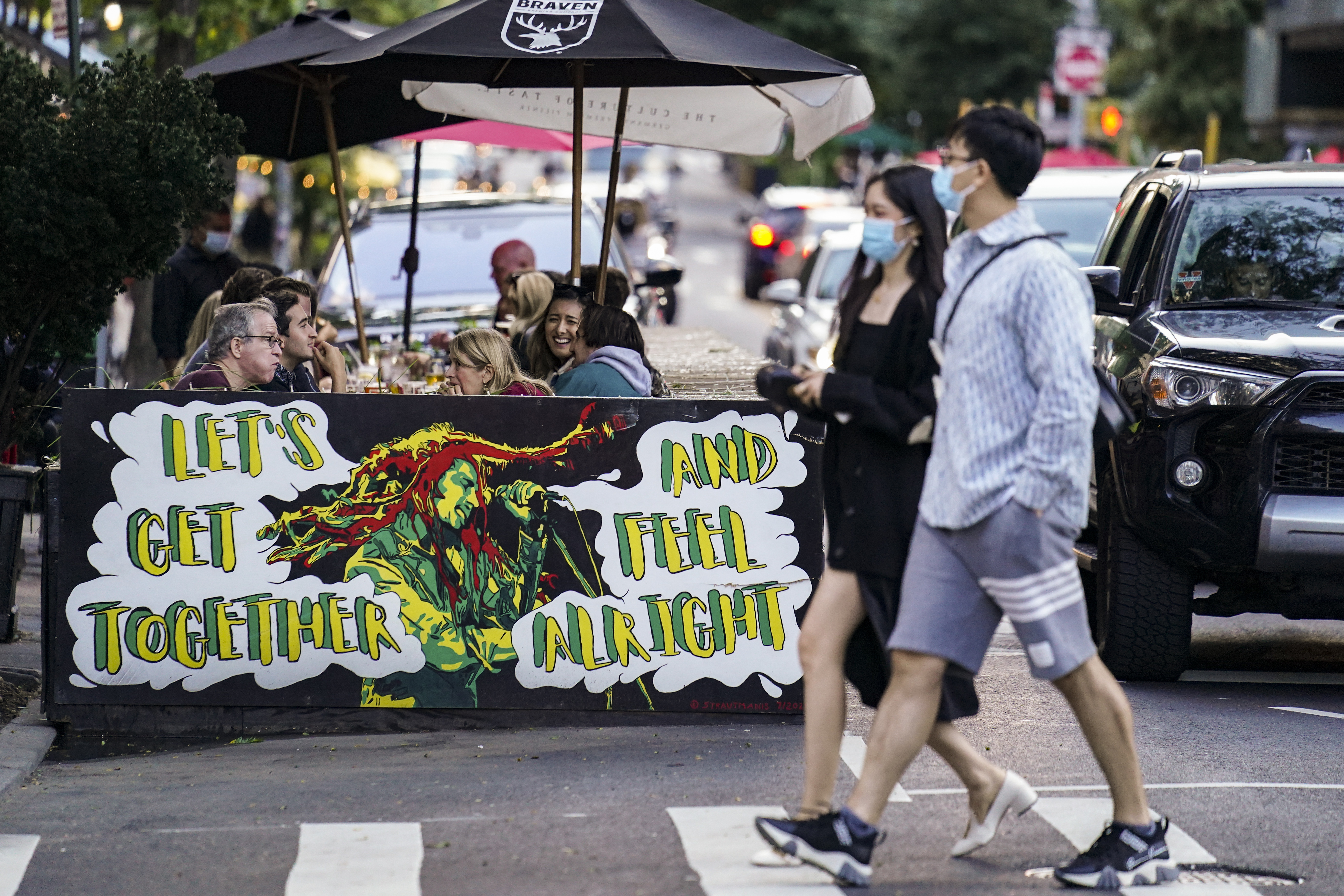 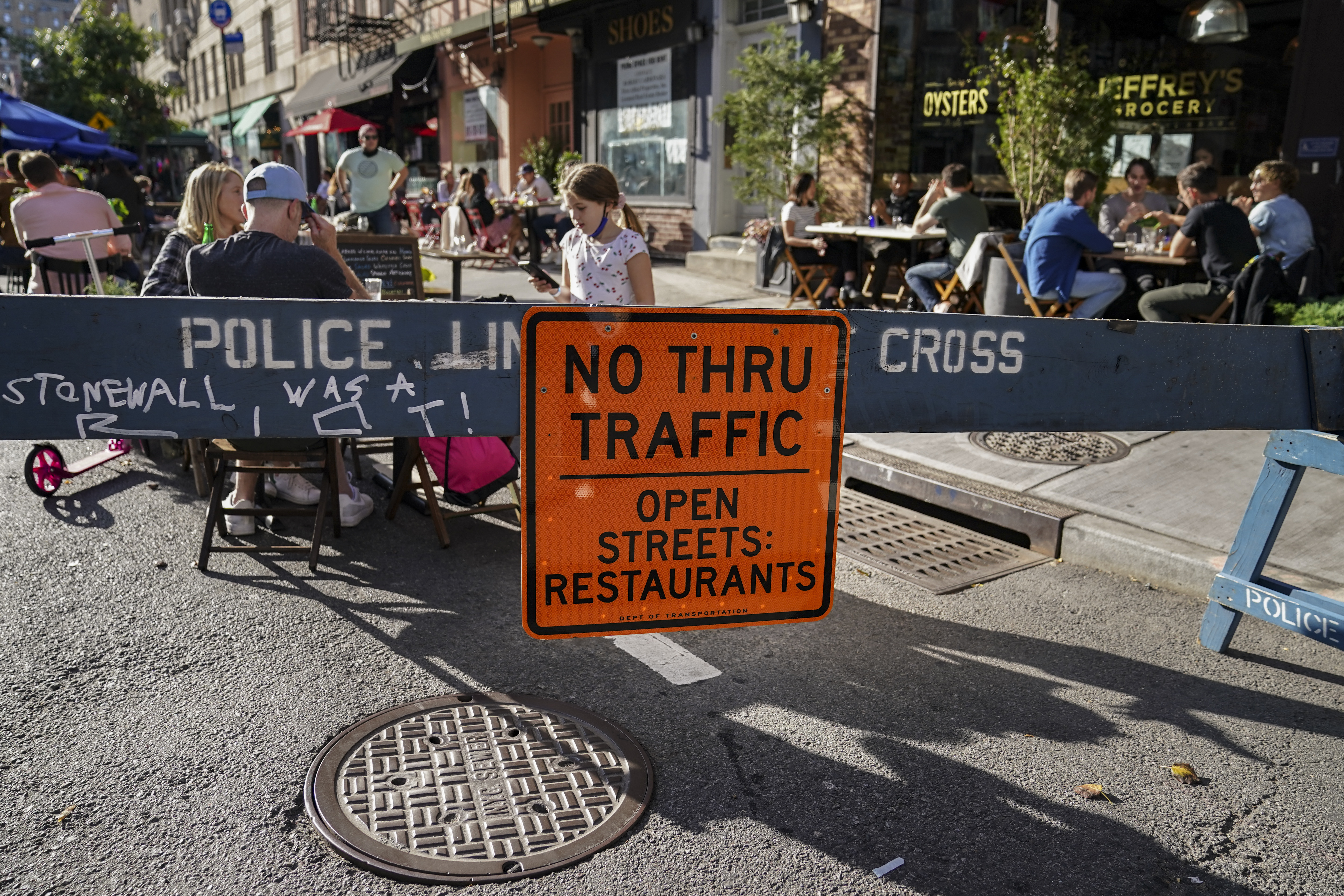 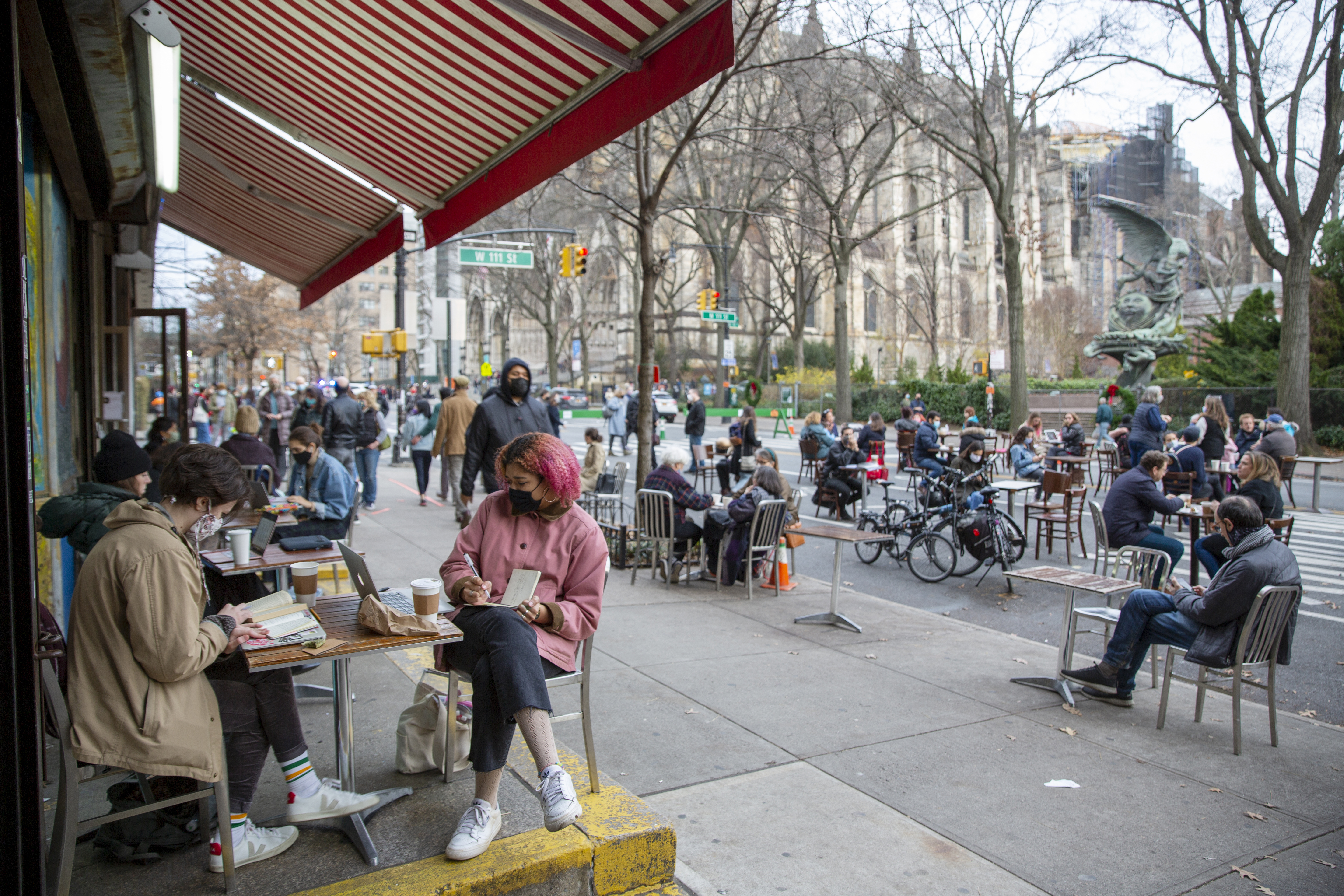 FILE - People eat at restaurant tables on a street block closed to vehicle traffic to allow social distancing and outdoor dining during the coronavirus pandemic in the borough of Manhattan in New York City on Sunday, December 13, 2020. As New York City forges ahead with its recovery, the pandemic is leaving lasting imprints, especially on city roadways: less room for cars and more space for people. (AP Photo/Ted Shaffrey, File) 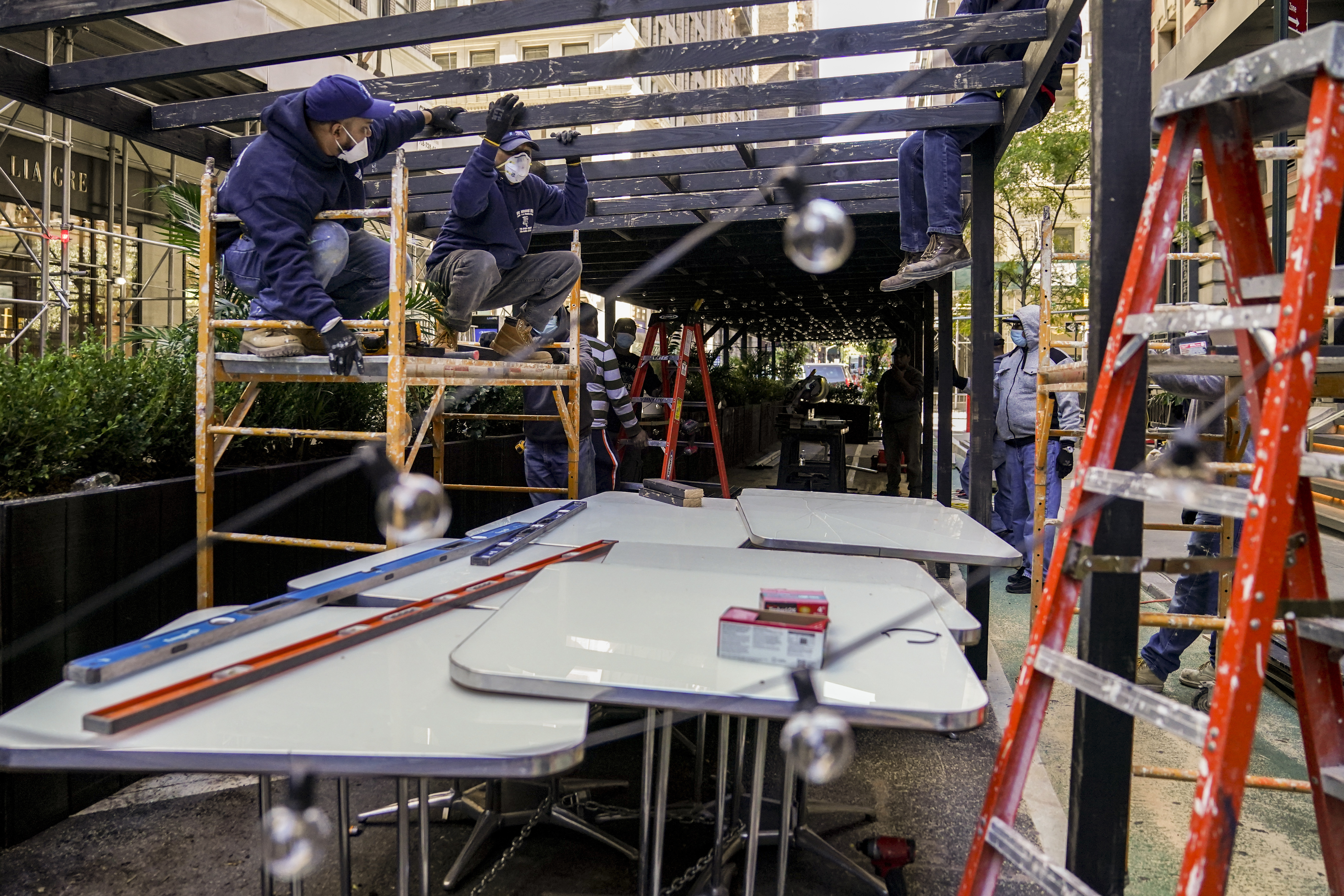