Greg Anthony speaks out about removal of Bearden head coach 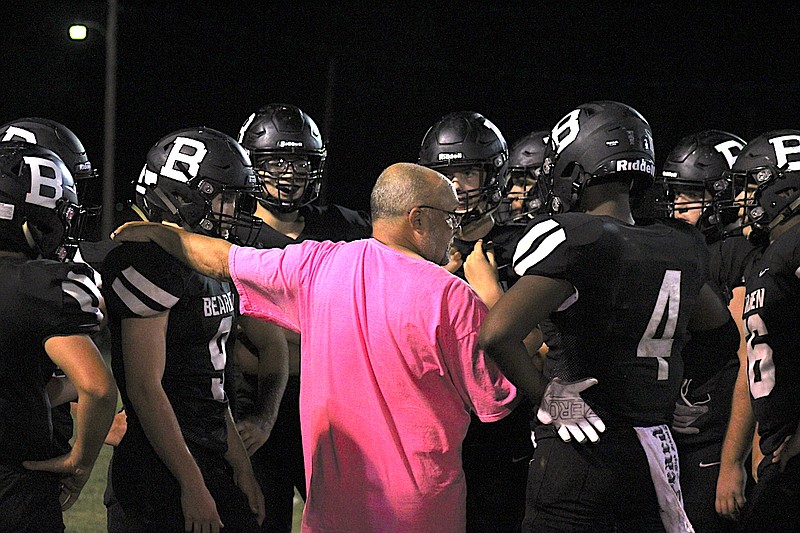 Photo By: Michael Hanich Bearden head coach Greg Anthony talking to his players in the huddle in the game against Hampton.

The story has updated for clarity.

According to former Bearden Bears head football coach/athletic director Greg Anthony, he was made aware of the decision last Friday of the decision to remove of his coaching positions by Bearden Superintendent Denny Rozenberg.

On Friday, May 6th, Camden News reached out to Coach Anthony for more information. Coach Anthony mentioned that he had a meeting with Bearden Superintendent Denny Rozenberg on Friday, April 29th about the decision to not renew Anthony as head coach/athletic director. Anthony told Camden News, "What he did is, he called me in and said we are taking your coaching duties and your AD duties, but you can stay here and teach for seven periods a day. I said I am not going to teach seven periods a day. There have been no write-ups, and there are no disciplinary issues in my files. There are no moral issues in my files. All of my evaluations from the principal and from him have all been passed with nothing negative. So why are we doing this?"

He also stated that Rozenberg asked him to stay at Bearden High School and teach seven periods a day during the 2022-2023 academic year.

Tony Harcrow, Bearden School Board member told the Camden News ,"We'll have a board meeting next Thursday night." Harcrow stated that an official decision would be made then and declined further comment. Camden News reached to Denny Rozenberg and has received no reply.

Anthony became the head football coach of the Bears going into the 2019-2020 school year. He took over as head coach of the Bears after one season with Trey Outlaw in the 2018 season. Anthony finishes his head coaching career at Bearden with an overall record of 7-27, including a 3-11 record in 2A-8 regional play.

Their biggest win under coach Anthony came in his first season in 2019 when the Bears took the Parkers Chapel Trojans 36-0 on the road. After a productive 2020 season where they finished 4-7 (2-3 in conference play), the Bears had a chance to capitalize on their improvements and become threats in the 2A State Playoffs. Instead, the Bears suffered a 0-11 season where they lost all four of their conference games.

This past season was tough on the Bears' football program as they lost all 11 of their games by double-digit points by an average of 36.3 points. They finished the 2021 season in the first round of the 2A State Playoffs with a 56-6 loss to the Clearedon Lions.

Coach Anthony has accepted another coaching job position in another school district. Coach Anthony said, "he (Rozenberg) let me at 9:15 last Friday morning that they weren't going to renew me. At 9:20, I made the phone call and got a job with the school board pending, and at 12 pm, I had my house sold in East Camden. I've had other coaches all and offer me jobs."

The Bears will kickoff their 2022 high school season on August 26th at the Drew Central Pirates.