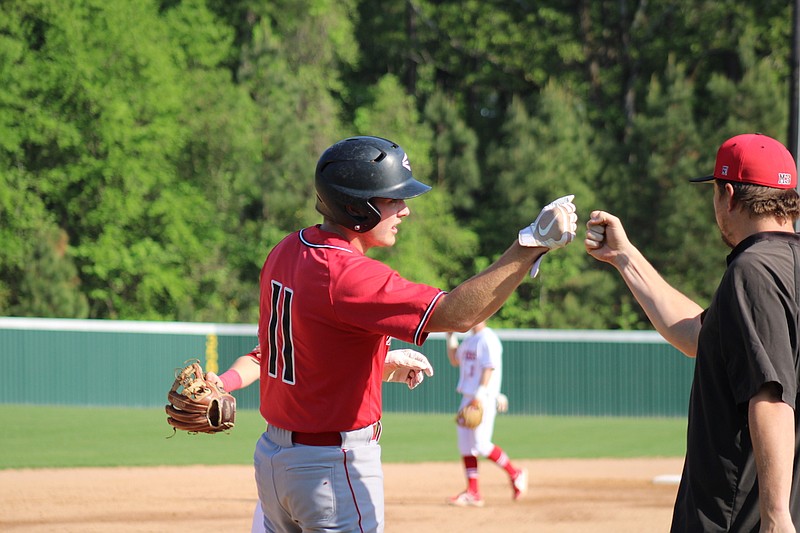 Photo By: Michael Hanich Camden Fairview senior pitcher Logan Robertson gets a fistbump from head coach Troy Keith in the game against Magnolia.

The Camden Fairview Cardinals baseball team went up against the Fountain Lake Cobras in the first round of the 4A South Regional Tournament in Malvern. The Cardinals needed to find an impressive batting rhythm to knock off a great defensive team in the Cobras. Camden Fairview was down 2-1 through six innings but was able to tie it up at the top of the seventh inning. As the game went into extra innings, senior star pitcher Logan Robertson was pulled after 111 pitches. At this moment, the Cobras were able to get on base more through walks. The Cobras 3-2 in the eighth inning through a fielding error. The Cardinals finished the 2022 season with an overall grade of 14-10 (10-4 in conference play).

The Harmony Grove Hornets baseball team entered the 3A regional tournament in Ashdown with one of the best overall records in the state 3A play. This past Thursday, the Hornets were tasked to face a familiar opponent in the first round against the Harmony Grove (Benton) Cardinals. In the first game of the 2022 season, the Hornets took down the Cardinals 11-8 in the "Battle of the Groves." It was a different outcome when it came time for the regional tournament. The Hornets were the most complete and efficient time, but the Cardinals were the ones that got hot as they shocked the Hornets with a 7-6 score. The Hornets finished the 2022 season with an overall record of 23-5-1 (11-1 in conference play).

Finally, the Harmony Grove Lady Hornets softball team came into the regional tournament in Ashdown on Thursday with a fresh new start. They were set to take on the Fouke Lady Panthers, one of the more impressive teams entering the tournament. The young but talented Lady Hornets looked to knock off the heavily favored Lady Panthers. Even though Harmony Grove held their own, they couldn't find a spark in the batting game to take down Fouke. The Lady Hornets finished the 2022 season with an overall record of 11-11 (7-5 in conference play).

All four of these did not finish their 2022 seasons on a great note, but they should they can be teams to watch out for in the future with some of their young talented players. Each team had huge significant wins that left a positive mark on their programs throughout the season.

Print Headline: Camden Fairview and Harmony Grove teams all knocked out of the first round of regionals