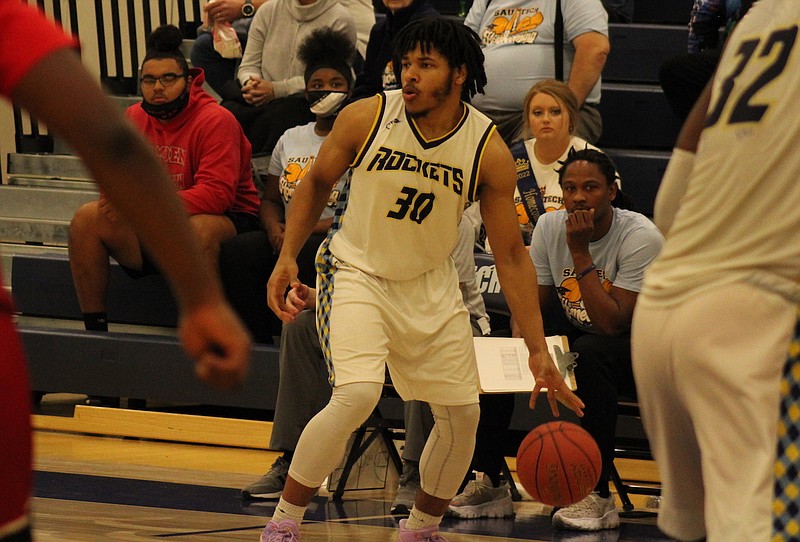 Photo By: Michael Hanich SAU Tech guard Neil Rice looks to set up a play in the game against Royal Ambassador Prep.

Stewart and Rice were key role players for a Rockets team looking to continue their success on the court by winning a second consecutive conference championship team for the 2021-2022 season. Stewart was the Rockets' starting center through the majority of the college basketball season, while Rice was a player that provided depth and consistency on both ends of the court.

Stewart played in 30 games this 2021-2022 season while starting in 17 of them. He was the Rockets' primary big-man in regular lineups and a quick option for a big-man lineup. In 30 games this season, Stewart averaged 8.8 points, shooting a field-goal percentage of 63.8% and a three-throw shooting percentage of 62.1%. He also averaged 6.6 rebounds, 0.8 assists, and 1.2 blocks per game.

Stewart had 12 games this past season where he accumulated ten or more points. His best performance this past season came in the Rockets' 99-76 win in the NJCAA Central Plains District Championship game versus the North Central Missouri College Pirates. Stewart accounted for 22 points shooting 10-of-11 in field goals and nine rebounds (four offensive rebounds), one assist, and three blocks.

Rice played in 30 games this season while starting in two of them. He was a player that provided solid depth at the guard position as he can prove a spark on the offensive end of the court as an efficient driver to the paint. Rice was also a solid defender as he can make transitions and lockdown a player in iso. Rice averaged 4.8 points per game, shooting 42.3% field-goal percentage and a field-goal percentage of 71.9%. He also averaged 1.9 rebounds, and 0.8 assists, 0.6 steals per game.

Rice's best game as a Rockets came this past season in the 110-69 win at the South Arkansas C.C. Stars. Rice accounted for 15 points, three offensive rebounds, one assist, two steals, and two blocks.

The two Rockets will continue being teammates for a Reddies team that finished the 2021-2022 college basketball season with an overall record of 17-12 (13-9 in conference play). They are looking to advance deeper in the Great American Conference Championship Tournament in the 2022-2023 College Basketball season. Stewart and Rice are players who could seriously impact the team due to their experience at the collegiate level and what skillsets they could bring to the team.