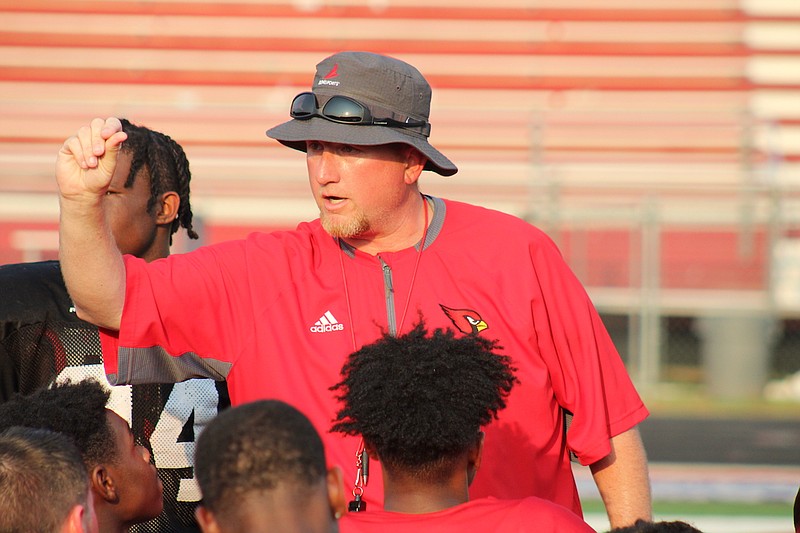 For the Camden Fairview Cardinals during the off-season, they had three goals: to compete, win, and get better. This Friday night, they displayed the current off-season progress they have worked on in their Spring Scrimmage Game.

The Cardinals looked to give a show to their fans, but more importantly, they looked to accomplish the three goals. Throughout the Spring, the defense for the Cardinals was the group that had the edge as they made it difficult for the offense to install their plays. The offense came out with a chip on their shoulder in their scrimmage game, and while it took a few series for them to find a rhythm, they were firing on all cylinders. The offense for Camden Fairview was picking up right where they left off at the end of their successful 2021 season.

The young offensive line eventually provided more stability for their quarterbacks in the pocket against a tenacious defensive line. The receiver corps found ways of beating the more experienced secondary in coverage.

While there were officially no winners or losers in the scrimmage, it was clear the Cardinals were looking solid on both sides of the ball. This Scrimmage Game was the best the offense has played throughout the Spring as they found a rhythm. Defensively, they started strong and struggled at times but remained hungry.

The scrimmage wasn't set up like an actual gameplay setup. It was a setup that got their first-team and second-team units going to find their rhythm, that was the main goal for head coach Nick Vaughn and his Cardinals team.

Coach Vaugh had this to say about the opportunity to play many young players in this Spring Scrimmage, "if you noticed, we've had about 82 dressed out tonight, and every kid got reps. That's what's important--no matter who will be the starter in this position or that. We have to build up depth for injury purposes and for the future and keep kids active and engaged. We're going to continue developing them, and that'll get guys more involved."

Dual-threat quarterback Martavius Thomas continued to be the high-caliber passer he was last season as he completed 15-of-21 for 270 yards and three touchdowns. He also ran the ball seven times, some on RPO plays, for 69 yards and a touchdown. His main targets, wide receivers Jarvis Reed and A.J. Alsobrook, were finding ways to get open against an efficient and alert Cardinals secondary. Reed caught four receptions for 130 yards and two touchdowns, while Alsobrook caught six receptions for 49 yards and a touchdown.

As coach Vaughn said, the goal of the scrimmage was to get all of the players a chance to get better and win. The second-team offense had significant moments where they could be the future stars of the Cardinals. Darrell Atkins Jr., an upcoming sophomore in the 2022-2023 school year, had a tremendous opportunity to showcase his potential. Atkins completed 11-of-17 of his passes for 261 yards and three touchdowns.

One of the biggest moments throughout the scrimmage was the emergence of wide receiver JyMarion Hopson, who played with a chip on his shoulder. Hopson's resilient attitude in his ability to run routes and avoid getting tackled allowed him to catch six receptions for 169 yards and two touchdowns.

Coach Vaughn complimented his team's effort and the willingness to get better throughout the Spring by saying, "I'll tell you what, we've come a long way in nine practices in pads, which is a good thing. Early on offensively, we really struggled a lot just to move the ball just because we feel like we're pretty talented to upfront on defense. Our defense has a chance to be special. But we've continued to progress. We come to work every day. We're proud of our kids because of that."

This is just the start for the Camden Fairview Cardinals as they finish their Spring Training session. They will have a whole off-season to get better and win in the workouts. Summer will be when the coaching staff can fix up some of the holes on their team and give their players a more competitive attitude during tough workouts. The players will look to win each workout every day and potentially continue to win through December. 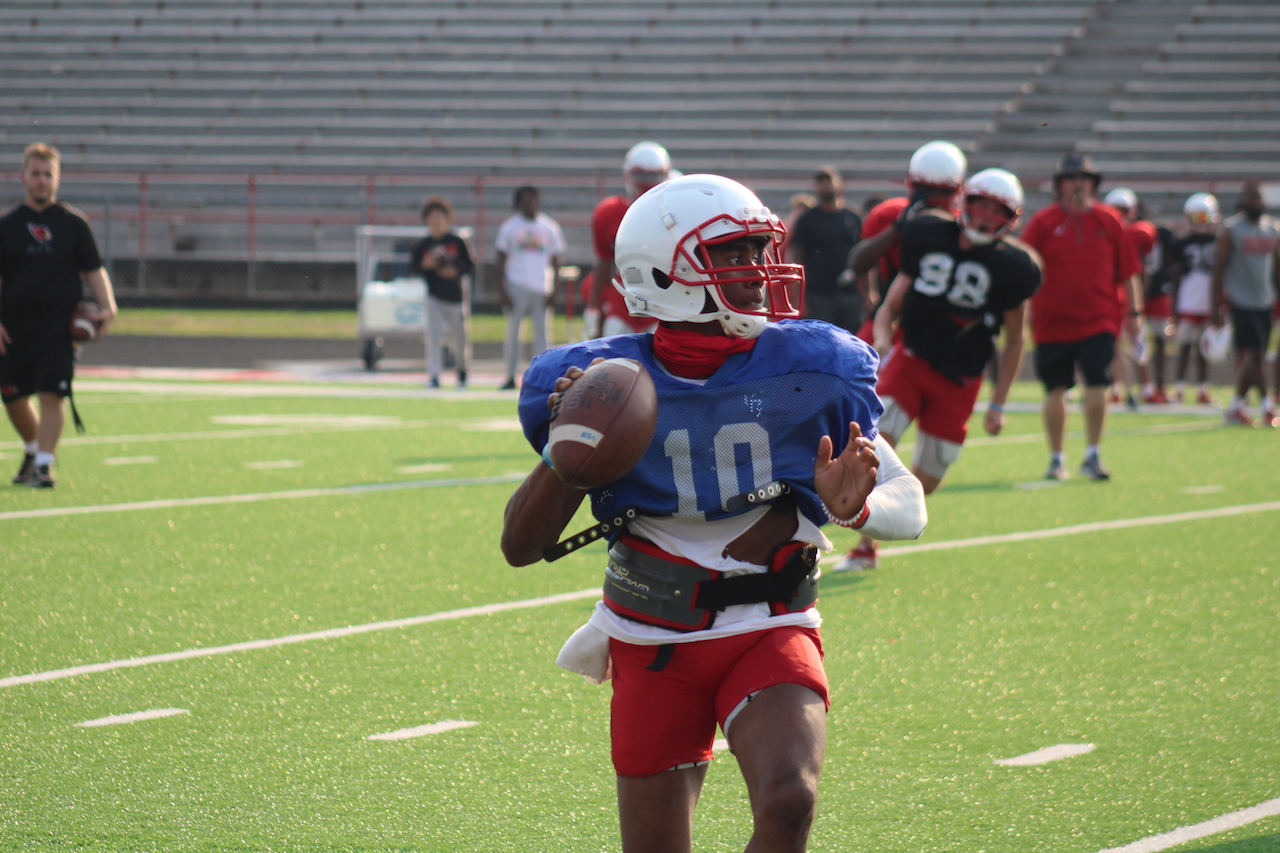 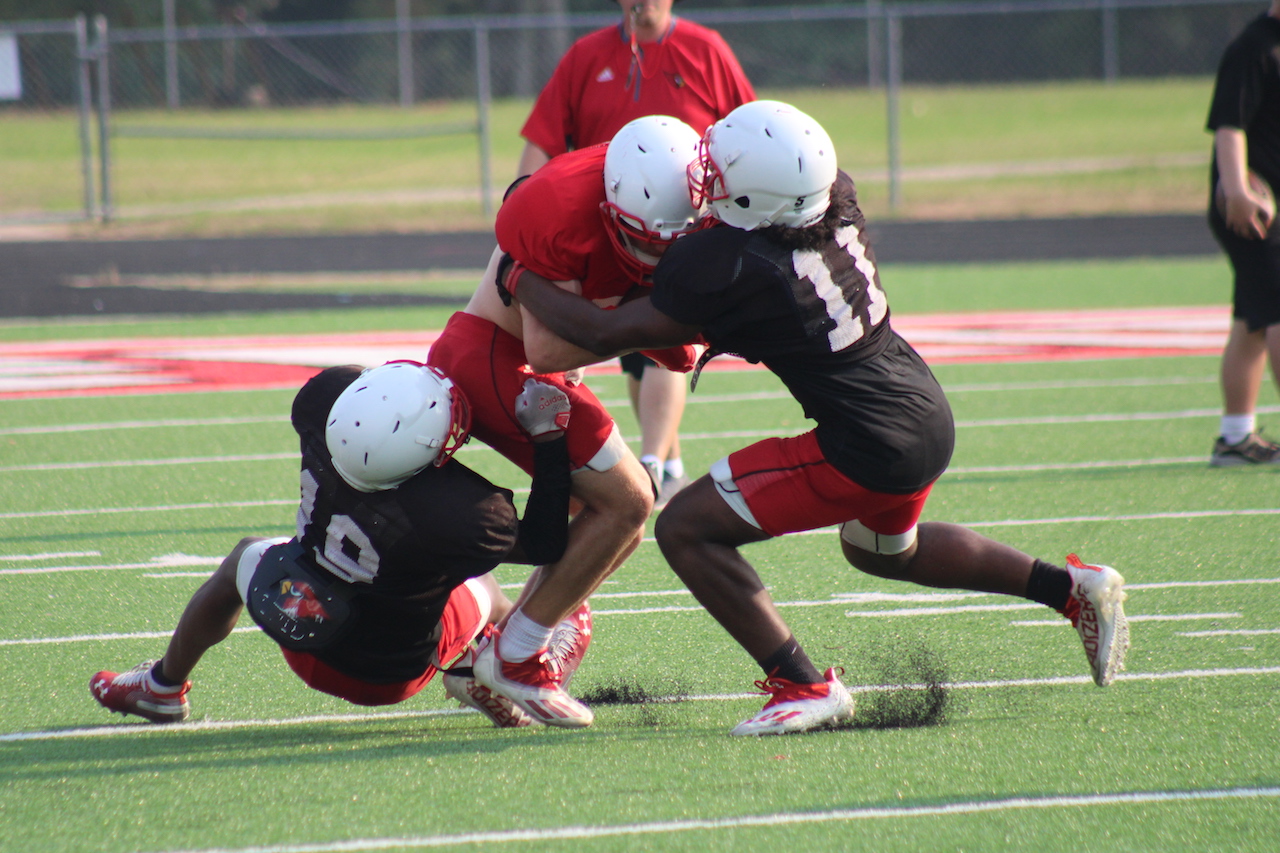 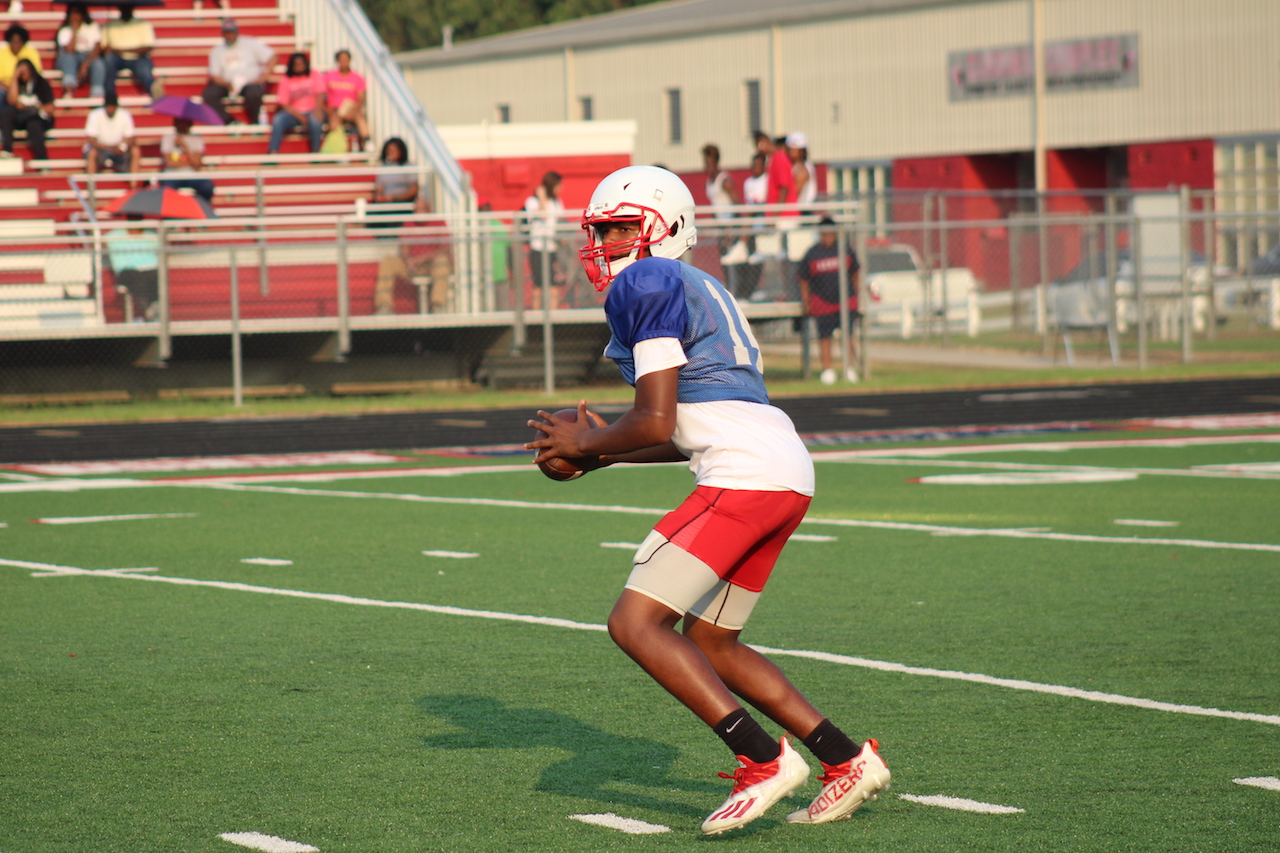 Photo By: Michael Hanich Camden Fairview quarterback Darrell Atkins Jr. gets set to throw the ball down the field.