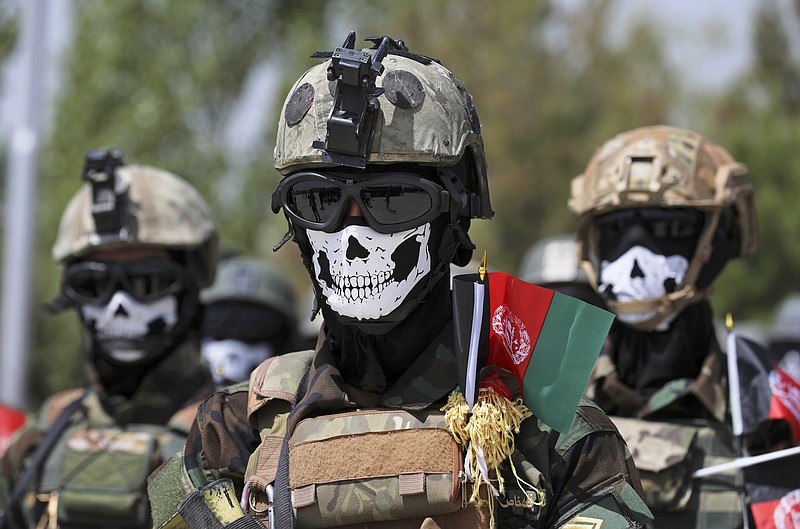 Afghan special forces soldiers who fought alongside American troops and then fled to Iran after the chaotic U.S. withdrawal last year are now being recruited by the Russian military to fight in Ukraine, three former Afghan generals told The Associated Press.

They said the Russians want to attract thousands of the former elite Afghan commandos into a "foreign legion" with offers of steady, $1,500-a-month payments and promises of safe havens for themselves and their families so they can avoid deportation home to what many assume would be death at the hands of the Taliban.

"They don't want to go fight -- but they have no choice," said one of the generals, Abdul Raof Arghandiwal, adding that the dozen or so commandos in Iran with whom he has texted fear deportation most. "They ask me, 'Give me a solution? What should we do? If we go back to Afghanistan, the Taliban will kill us.'"

Arghandiwal said the recruiting is led by the Russian mercenary force Wagner Group. Another general, Hibatullah Alizai, the last Afghan army chief before the Taliban took over, said the effort is also being helped by a former Afghan special forces commander who lived in Russia and speaks the language.

The Russian recruitment follows months of warnings from U.S. soldiers who fought with Afghan special forces that the Taliban was intent on killing them and that they might join with U.S. enemies to stay alive or out of anger with their former ally.

A GOP congressional report in August specifically warned of the danger that the Afghan commandos -- trained by U.S. Navy SEALs and Army Green Berets -- could end up giving up information about U.S. tactics to the Islamic State group, Iran or Russia -- or fight for them.

"We didn't get these individuals out as we promised, and now it's coming home to roost," said Michael Mulroy, a retired CIA officer who served in Afghanistan, adding that the Afghan commandos are highly skilled, fierce fighters. "I don't want to see them in any battlefield, frankly, but certainly not fighting the Ukrainians."

Mulroy was skeptical, however, that Russians would be able to persuade many Afghan commandos to join because most he knew were driven by the desire to make democracy work in their country rather than being guns for hire.

AP was investigating the Afghan recruiting when details of the effort were first reported by Foreign Policy magazine last week based on unnamed Afghan military and security sources. The recruitment comes as Russian forces reel from Ukrainian military advances and Russian President Vladimir Putin pursues a sputtering mobilization effort, which has prompted nearly 200,000 Russian men to flee the country to escape service.

Russia's Defense Ministry did not respond to a request for comment. A spokesman for Yevgeny Prigozhin, who recently acknowledged being the founder of the Wagner Group, dismissed the idea of an ongoing effort to recruit former Afghan soldiers as "crazy nonsense."

The U.S. Defense Department also didn't reply to a request for comment, but a senior official suggested the recruiting is not surprising given that Wagner has been trying to sign up soldiers in several other countries.

It's unclear how many Afghan special forces members who fled to Iran have been courted by the Russians, but one told the AP he is communicating through the WhatsApp chat service with about 400 other commandos who are considering offers.

He said many like him fear deportation and are angry at the U.S. for abandoning them.

"We thought they might create a special program for us, but no one even thought about us," said the former commando, who requested anonymity because he fears for himself and his family. "They just left us all in the hands of the Taliban."

The commando said his offer included Russian visas for himself as well as his three children and wife who are still in Afghanistan. Others have been offered extensions of their visas in Iran. He said he is waiting to see what others in the WhatsApp groups decide but thinks many will take the deal.