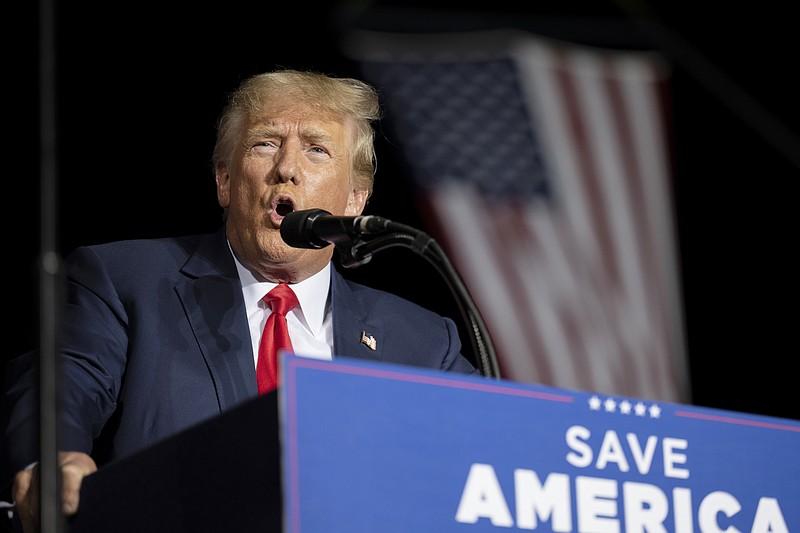 FILE - Former President Donald Trump speaks at a rally at the Minden Tahoe Airport in Minden, Nev., Saturday, Oct. 8, 2022. For years, as Trump was soaring from reality TV star to the White House, his real estate empire was bankrolling big perks for some of his most trusted senior executives, including apartments and luxury cars. Now Trump's company, the Trump Organization, is on trial this week for criminal tax fraud &#x2014; on the hook for what prosecutors say was a 15-year scheme by top officials to hide the plums and avoid paying taxes. (AP Photo/Jos&#xe9; Luis Villegas, File)

NEW YORK -- For years, as Donald Trump was soaring from reality TV star to the White House, his real estate empire was bankrolling big perks for some of his most trusted senior executives, including apartments and luxury cars.

Now Trump's company, the Trump Organization, is on trial for criminal tax fraud -- on the hook for what prosecutors say was a 15-year scheme by top officials to avoid paying taxes on those fringe benefits.

In opening statements Monday, prosecutors and defense lawyers sparred over the company's culpability.

Prosecutor Susan Hoffinger argued the company is liable because the officials were "high managerial agents," entrusted to act on behalf of the company and its various entities, and that the company benefited because it didn't have to pay them as much in actual salary.

"This case is about greed and cheating -- cheating on taxes," Hoffinger said in a 40-minute opening statement. "(The Trump Organization) paid their already highly paid executives even more by helping them cheat on taxes."

A company lawyer, Susan Necheles, countered that the company was being unfairly blamed for the actions of an executive -- longtime finance chief Allen Weisselberg -- who had essentially gone rogue and was now cooperating with prosecutors to save himself.

Weisselberg, a major beneficiary of the scheme whose apartment, cars and grandchildren's school tuition were paid by the company, pleaded guilty and has agreed to testify against the company in exchange for a five-month jail sentence.

Weisselberg's son and another Trump Organization executive were also accused of getting off-the-books compensation.

Last week, 12 jurors and six alternates were picked for the case, but one alternate was dismissed Monday. The tax fraud case is the only criminal trial to arise from the Manhattan district attorney's three-year investigation of the former president.

It's one of three active cases involving Trump or the Trump Organization in New York courts.

If convicted, the Trump Organization could be fined more than $1 million and could face difficulty in securing new loans and deals. Some partners and government entities could seek to cut ties with the company. It could also hamper its ability to do business with the U.S. Secret Service, which sometimes pays the company for lodging and services while protecting Trump as a former president.

Neither Trump nor any of his children who have worked as Trump Organization executives are charged or accused of wrongdoing. Trump is not expected to testify or even attend the trial.

Prosecutors have said they do not need to prove Trump knew about the scheme to get a conviction and that the case is "not about Donald Trump." But a defense lawyer, William J. Brennan, said even if he's not physically there, Trump is "ever present, like the mist in the room."

That's because Trump is synonymous with the Trump Organization, the entity through which he manages his many ventures, including his investments in golf courses, luxury towers and other real estate, his many marketing deals and his TV pursuits. Trump signed some of the checks at the center of the case. His name is on memos and other company documents. 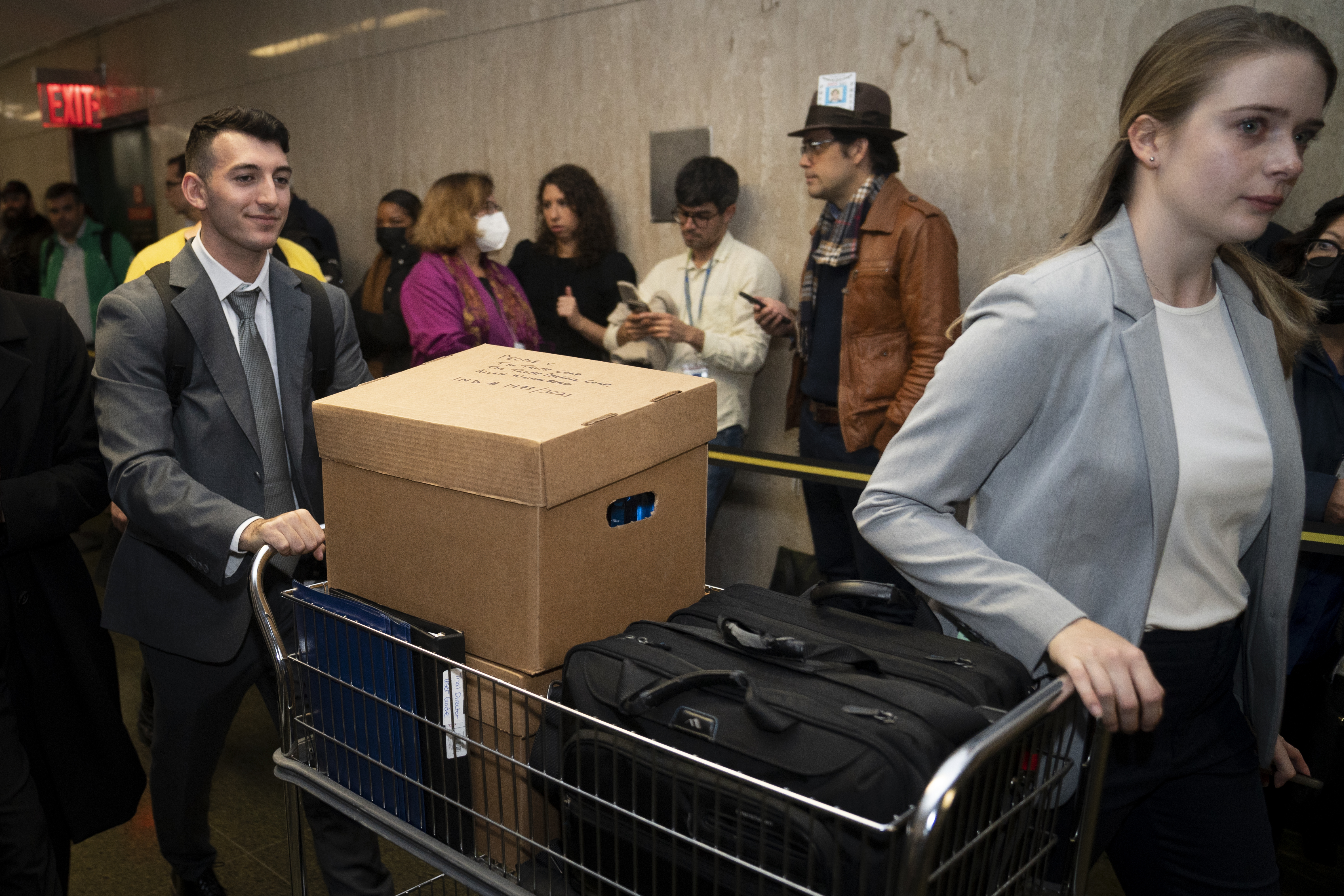 A box bearing the words "The Trump Corp," "The Trump Payroll Corp," and "Allen Weisselberg," is brought to a courtroom as lawyers arrive to criminal court, Monday, Oct. 31, 2022, in New York. The Trump Organization is on trial this week for criminal tax fraud. (AP Photo/John Minchillo) 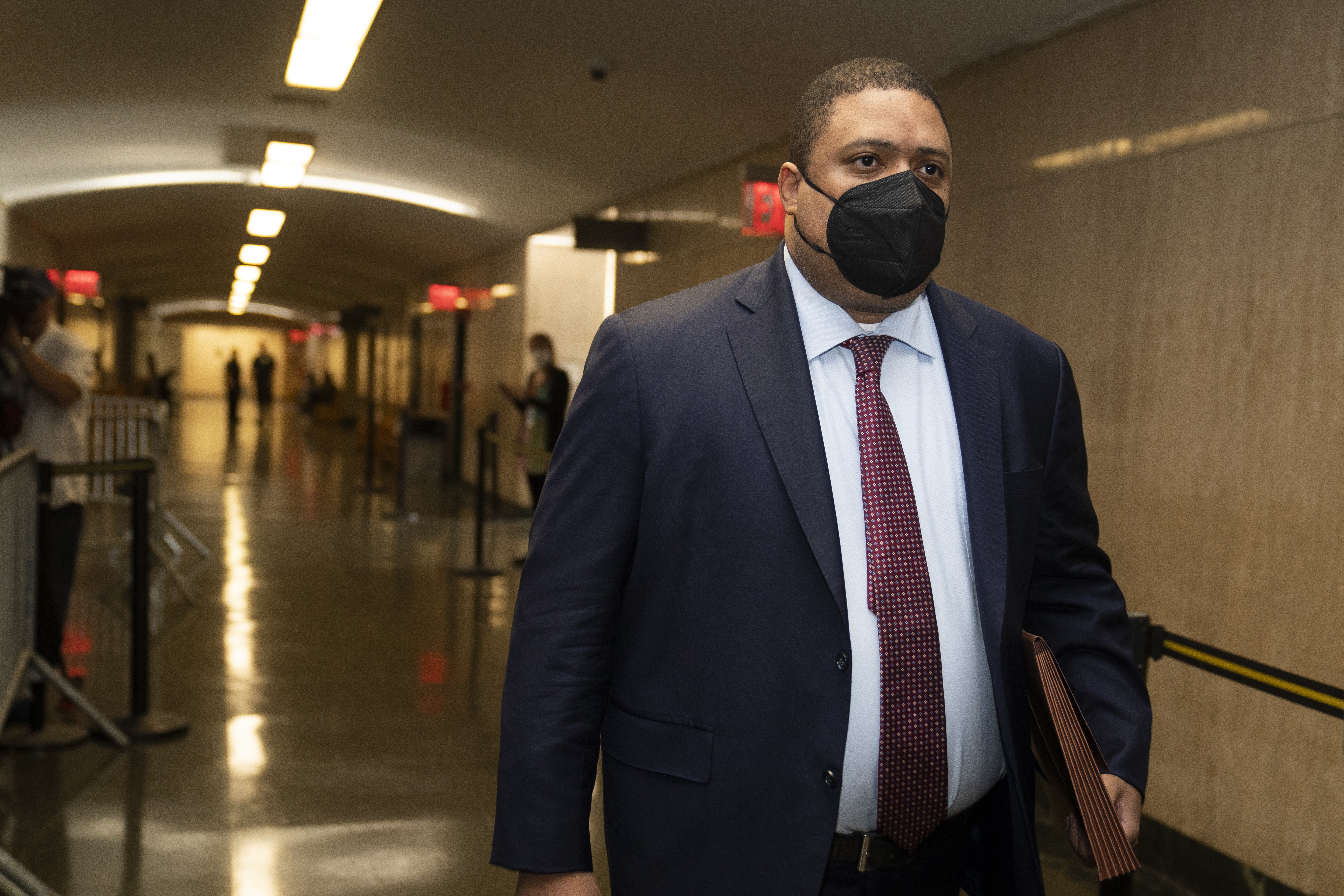 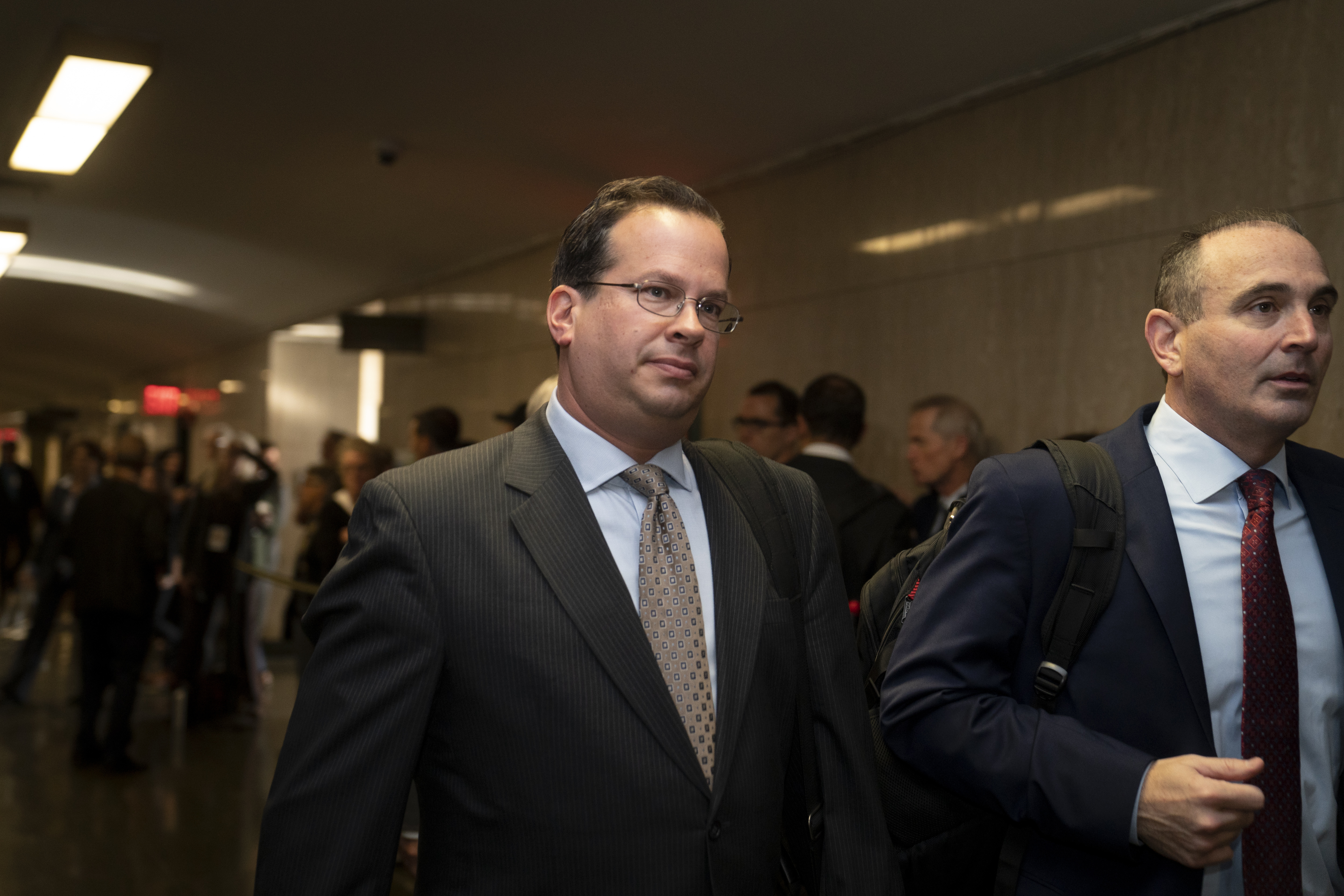 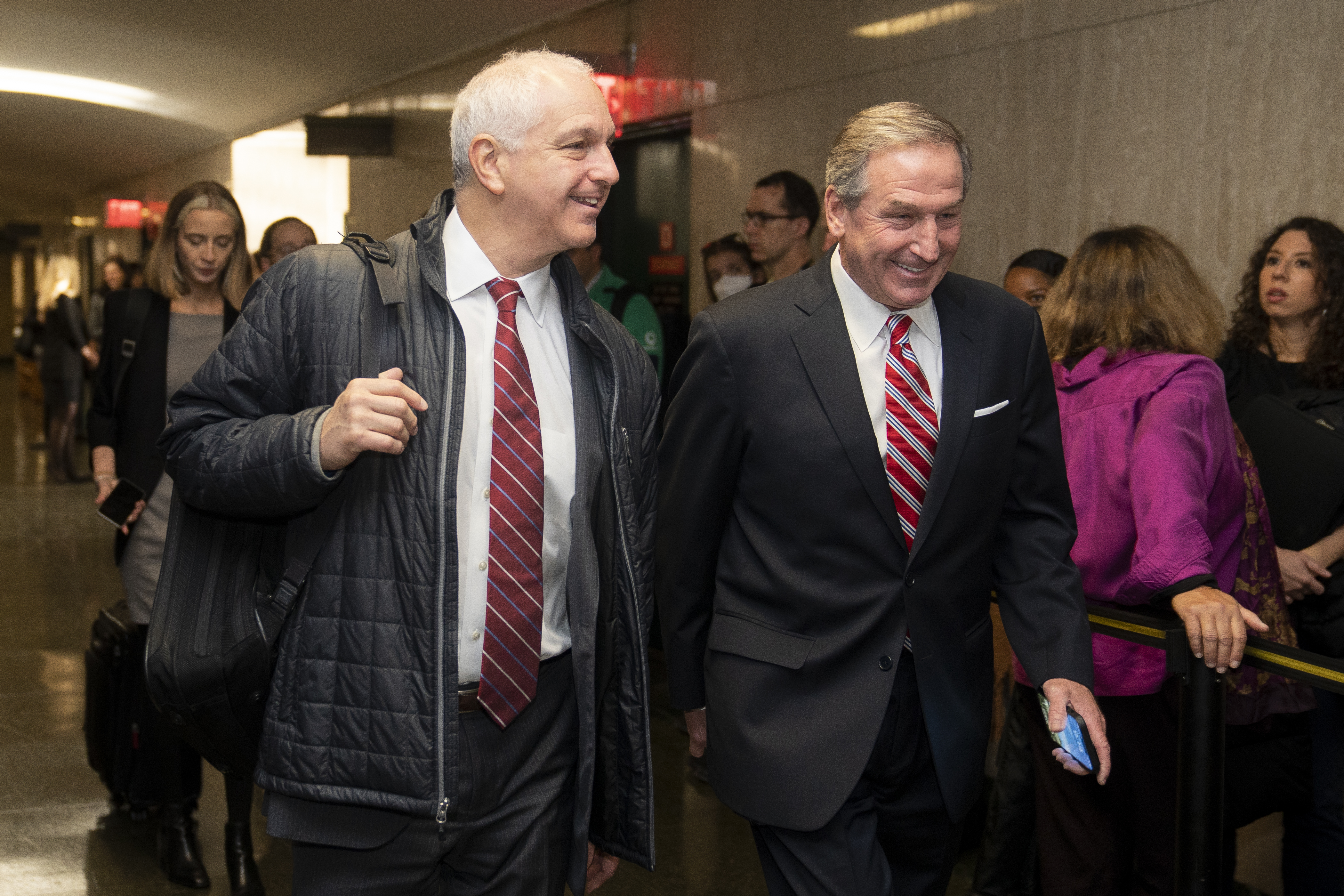 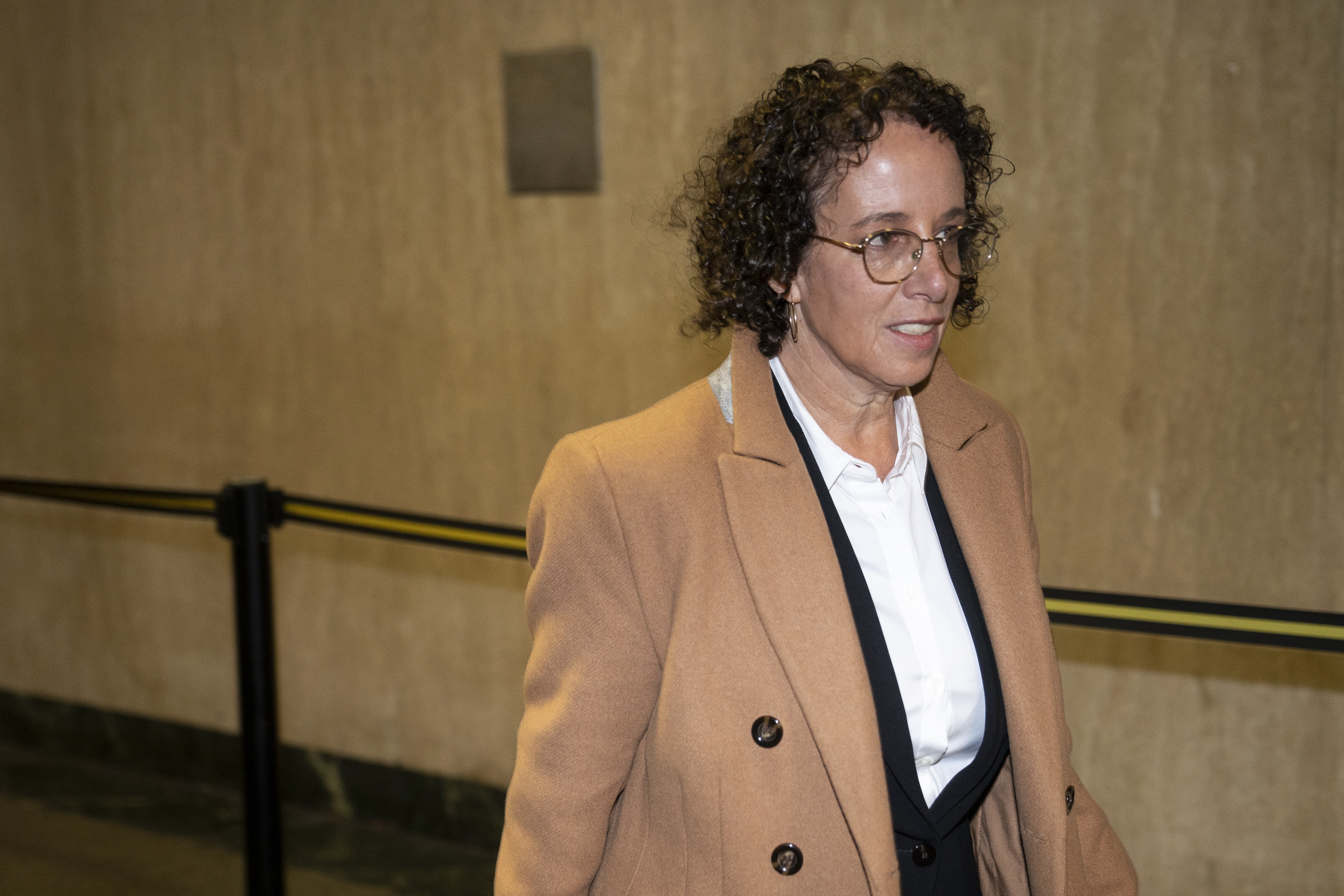