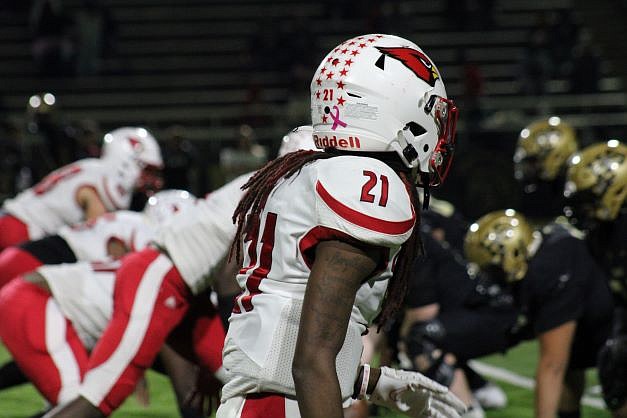 Photo By: Michael Hanich Camden Fairview cornerback Matt Davis gets set for the snap in the game against Hot Springs.

The Camden Fairview Cardinals (9-2) will continue on their path in the 5A State Playoffs as they go on the road to Jonesboro to take on the Valley View Blazers (9-2) Friday.

The Cardinals hope to accomplish a key goal of the off-season to be practicing during the Thanksgiving holidays for the semi-finals of the state playoffs. In order to do so, the Cardinals need to get past the Blazers in a cold, hostile environment.

The Cardinals endured nasty weather that impacted the game last week when they shutout the Vilonia Eagles, 30-0 in round one of the playoffs. Offensively, the Cardinals kept most of their plays on the ground through their highly efficient rushing game. Thirty-nine of the 56 plays from Camden Fairview were run plays. Senior runningback A.J. Alsobrook and sophomore Kenneth Lanford combined for 273 yards and three touchdowns on 26 carries.

The Cardinals could see a more well-balanced offense on Friday night, with the passing game being a primary point of attack against a Blazers' defense that allows an average of 17.3 points per game. This is a Blazers' defense that plays a two safety backfield, but has their outside linebackers play close attention to the line of scrimmage. This Blazers' defense likes to play aggressive and create chaos in the backfield. Valley View can also be overpowered at the line of scrimmage and give away easy scoring positions, similar to their game against Farmington last week.

Cardinals senior linebacker Michal Griffith has been playing at a high level in the last couple of wins for Camden Fairview. Griffith accounted for nine total tackles and five solo tackles in the win over Vilonia last week. He also accounted for 14 total tackles in the 34-7 road win over Hot Springs on Oct. 28. He will be key for the Cardinals' defense as they look to shut down any chances in Valley View's running ans short passing games.

The biggest factors of the game for Camden Fairview will be the mismatch of the Blazers' receivers versus the Cardinals' cornerbacks. Valley View senior Mark Wilson (6 feet tall) has caught 33 receptions for 650 yards and seven touchdowns and possesses great breakout speed while managing to create good separation in his route-running. Blazers junior Jackson Harmon (6 foot 5) has caught 30 receptions for 491 yard and five touchdowns and can win contested coverages. The Cardinals secondary does not possess the height to consistently create tight coverages over Harmon, but they have the speed and athleticism to keep up in close range. Camden Fairview sophomore Ronald Buckhanan could be a big factor in helping provide double-coverage or switching the coverage schemes.

Camden Fairview takes on Valley View this Friday night at 7 p.m. in Jonesboro.