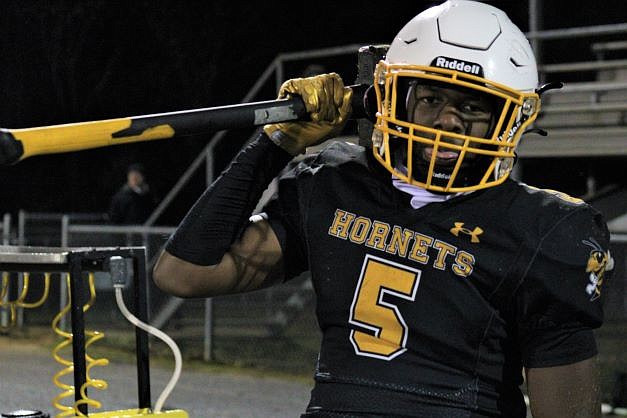 Photo By: Michael Hanich Harmony Grove running back Shamar Patterson celebrating with the sledgehammer after a big touchdown in the game against Corning.

The Harmony Grove Hornets (7-4) rebounded from their tough 42-40 regular season loss to Barton by dominating their first round playoff matchup at home versus the Corning Bobcats last Friday, when they continued to play consistent ball on offense and had their best defensive performance in three weeks.

Harmony Grove will look to return to the quarterfinals of the 3A State Playoffs for the first time since 2019 as they go on the road to take on the Osceola Seminoles (7-4) in the second round of the playoffs tonight.

The last time the two teams met was in the 2019 semifinals when the Seminoles crushed the Hornets, 38-6.

The Hornets' offense has averaged 40.5 points per game this season thanks to a high-level, well-balanced offense. In their 49-14 win over Corning, the Hornets rushed for 266 yards and five touchdowns on 23 carries. The offensive line can create a huge impact by overpowering Osceola's defenders at the line of scrimmage and creating just enough running room for the many talented ball carriers to burst through for big plays.

Harmony Grove's offense has done a great job this season establishing themselves in the running and passing game. But, Osceola's defense has developed enough of a rhythm that they could make the Hornets pay with a turnover or a quick punting situation.

Osceola's biggest edge on the offensive side of the ball is the size of their offensive line. Harmony Grove will be facing one of the biggest offensive lines in the entire state in 3A play. But, the Hornets have previously found great success against the sizable offensive line of the Fordyce Redbugs.

Harmony Grove is facing a well-balanced offense in Osceola that averages 31.2 points per game. The Seminoles find more success in the passing game, averaging 160.5 passing yards per game. Osceola quarterback Torian Bell Jr. has completed 100-of-173 of his passes for 1,677 yards, 23 touchdowns and five interceptions this season.

The defensive linemen of the Hornets will need to have a big performance on Friday to not only keep Bell in the pocket, but also pressure him to make bad throws. He is not an explosive quarterback, but is able to find mismatches in the coverage schemes of his opponents. Junior defensive end Quinten Jones could have a big game by generating significant pressure from the edge with his power and speed.

Harmony Grove is set to play on the road versus Osceola this Friday night at 7 p.m.

Print Headline: Harmony Grove goes on the road for round two of playoffs against Osceola