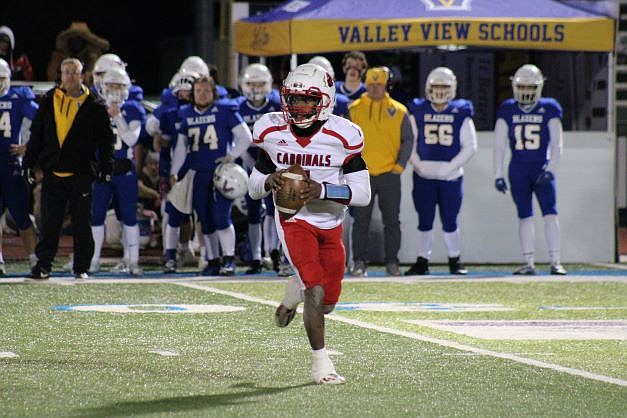 Photo By: Michael Hanich Camden Fairview quarterback Martavius Thomas looks for an open receiver in the game against Valley View.

The playoffs bring out the best in some of the top players and top teams. For the Camden Fairview Cardinals, they had to endure a tough second-round matchup on the road versus the Valley View Blazers to make their preseason of practicing during Thanksgiving.

On the offensive side of the ball, the strength of the Cardinals was limited as they could not run the ball as effectively as in round one over the Vilonia Eagles. The Cardinals were able to establish themselves in the deep passing game with speed and explosiveness. The defense took a while to compose themselves and find an edge in the pass rush. Eventually, the pass rush slowed down a dynamic offense with a mobile quarterback. The Cardinals made the critical plays at the most critical times on both ends of the field as they took the lead in the fourth quarter and completed a 26-21 comeback on the road.

The first two drives of Camden Fairview had momentum but faced too much pressure from the interior as the drives stalled. In the second drive for Valley View, Blazers quarterback Carson Turley was able to extend the drive with his legs with the secondary and linebackers preoccupied with the receiver corp. Valley View was able to get on the board first with a 39-yard touchdown pass from Turley to wide receiver Mark Wilson.

Camden Fairview responded with a scoring drive of their own, but disaster struck on the fifth play of the drive as Cardinals quarterback Martavius Thomas was sacked for a 17-yard loss trying to scramble. On the following punt, the snap to punt Nasir Khan was off as the Blazers recovered at the Cardinals' 17-yard line. Two plays later, Valley View found the end zone again on a 12-yard jump pass to get to a 14-0 lead with two minutes in the first quarter.

Camden Fairview was able to respond two plays later as Thomas found senior wide receiver Jarvis Reed for a 58-yard touchdown play less. Just as the Cardinals caught a break, the defense was missing key tackles as junior running back Slade Caldwell found his way to the end zone on a 24-yard touchdown run. The Blazers had jumped to a 21-7 lead with 10:32 left in the second quarter.

Cardinals sophomore receiver/returner Trent Haygood created an excellent return to the Blazers' 27-yard line. The Cardinals kept it on the ground with the RPO with Thomas and senior running back A.J. Alsobrook. In five plays from scrimmage, Thomas was able to power his way into the end zone for a 9-yard touchdown to lower the deficit to 21-14.

Two drives later, the Cardinals looked to tie the game 21-21 going into halftime. On the fifth play of a positive drive, a bad handoff from Thomas and Alsobrook caused a fumble and open an opportunity for the Blazers to stop a big momentum shift for Camden Fairview.

Coming out of halftime, both teams came out with more urgency, but it was the Cardinals' defense that created momentum that would last throughout the rest of the game. With the defensive linemen finding ways to crash into the backfield and create more chaos at the line of scrimmage, their presence would impact the rest of the game.

In the first play of the fourth quarter, Turley fumbled the snap from the shotgun as Cardinals senior defensive end D.J. King picked up the fumble and returned it for a 60-yard touchdown. The extra point for Camden Fairview as they only trailed 21-20 with a whole fourth quarter remaining.

The Blazers extended the drive as it look like they were going to respond with a potential score. The defense of Camden Fairview, however, remained strong and forced a punt in the ninth play of the drive. Camden Fairview and Valley View exchanged a couple of quick drives that resulted in punts.

The Cardinals got the ball back with 4:17 left down 21-20 and needed a scoring drive to ensure their season continued. On third down and eight yards to go on the Cardinals' 32-yard line, Thomas was able to find Haygood for a 68-yard deep clutch touchdown. The Cardinals took the lead for the first time in the game 26-21 with 3:22 left in the game. Camden Fairview's defense held on and stalled Valley View's offense with the pressure of their defensive line and the great coverage of their secondary in the last two drives. Cardinals sophomore safety Ronald Buckhanan sealed Camden Fairview's win by securing the game-winning interception in the Blazers' final drive.

Camden Fairview (10-2) will go on the road for round three of the 5A State Playoffs as they take on the Shiloh Christian Saints (11-1) next Friday night. 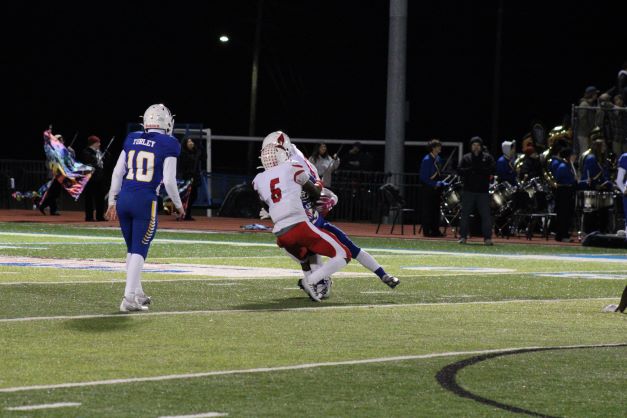 Photo By: Michael Hanich Camden Fairview defensive end D.J. King makes a sack in the backfield in the game against Valley View. 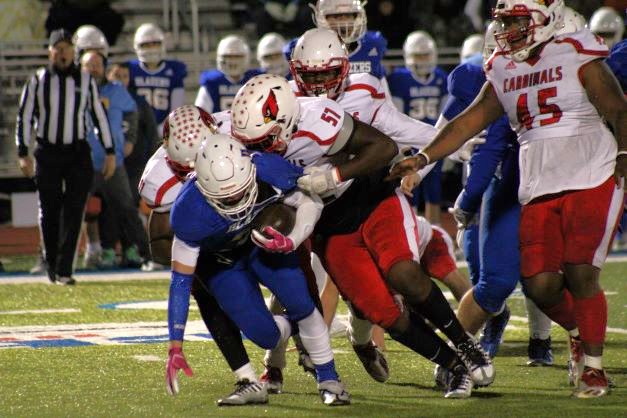