MINNEAPOLIS (AP) -- The Dallas Cowboys had some hard conversations with each other after their collapse last week at Green Bay.

They took out all that frustration and then some on the Minnesota Vikings, who might need a serious talk themselves after their seven-game winning streak came to a screeching halt.

Tony Pollard had two touchdown catches with a career-high 189 yards from scrimmage, and the Cowboys sacked Kirk Cousins a career-most seven times Sunday in a 40-3 victory over the Vikings.

"We kind of found our formula, just running the ball, pounding the defense, dominating on all phases of the game," Pollard said.

Dak Prescott was flawless at quarterback, Ezekiel Elliott rushed for two scores in his return from injury and Brett Maher made four field goals -- including a 60-yarder to end the first half. The Cowboys (7-3) scored on their first seven possessions, and the defense was just as good.

Micah Parsons and Dorance Armstrong had two sacks apiece in the fifth-largest loss ever for the Vikings -- and the biggest road win in Cowboys history.

"This league has a way of humbling any football team at any point in time if you don't play good football," Vikings coach Kevin O'Connell said.

The Vikings (8-2) have been the king of the comebacks in an NFL season featuring the smallest average winning margin in 90 years, none more remarkable than last week at Buffalo when they turned a 17-point deficit late in the third quarter into an overtime victory.

Parsons promised Prescott and the offense this week the Cowboys would never again lose a 14-point fourth-quarter lead like they did last week for the first time in franchise history when they fell in overtime to the Packers.

"I welcome constructive criticism," Parsons said, "and when you have that balance of understanding it's OK and giving that back, it turns out really good."

After surrendering 200 rushing yards in consecutive games for the first time since their 1960 inaugural season, the Cowboys flipped the script by gaining 108 yards on the ground in the first half. Seven of their eight third-down conversions came by rushing.

The snapshot of the afternoon came soon after halftime when the Cowboys faced third-and-14. With no hurry to throw, Prescott found Pollard in a one-on-one mismatch with linebacker Jordan Hicks and lofted a pass near the sideline for a 68-yard score that gave Dallas a 30-3 lead.

"That touchdown was all Kellen," Prescott said, praising his play-caller.

The Vikings were so out of sorts they had six penalties for 54 yards in the third quarter alone. Cousins finished 12 for 23 for 105 yards and a lost fumble that Parsons forced with a blind-side sack the first time the Vikings tried to pass. Justin Jefferson, coming off a career-high 193 receiving yards against the Bills, had 33 yards on three catches.

"We've got a lot of work to do in a short amount of time," Hicks said.

Pollard, the Cowboys' most dangerous weapon on offense all season with Prescott and Elliott missing time to injuries and CeeDee Lamb still finding his way as the No. 1 receiver, finished with six catches for 109 yards and 15 rushes for 80 yards.

"He can do a lot of different things to help this offense and this team, and he's just continuing to show it," Prescott said.

SO MUCH FOR CLOSE GAMES

Although Minnesota still has the second-best record in the NFC, all but one of its wins have come in one-score games and its two losses have come by a combined 54 points. Overall, Minnesota has been outscored 231-229.

Maher has four 60-plus-yard field goals in his career, the most in NFL history. He even made the 60-yarder twice, after a late stoppage for replay review negated the first kick he got off before the Cowboys heard the whistle. Three of Maher's makes were from 50-plus yards, giving him the single season team record with seven.

Cowboys: LB Anthony Barr (hamstring) was inactive against his former team. He played eight seasons for the Vikings. DT Quinton Bohanna (illness) was also scratched. ... CB Kelvin Joseph (illness) did not play in the second half.

Vikings: Host the New England Patriots on Thursday night, the first Thanksgiving Day home game in franchise history. They last played on the holiday in 2017, a 30-23 win at Detroit. 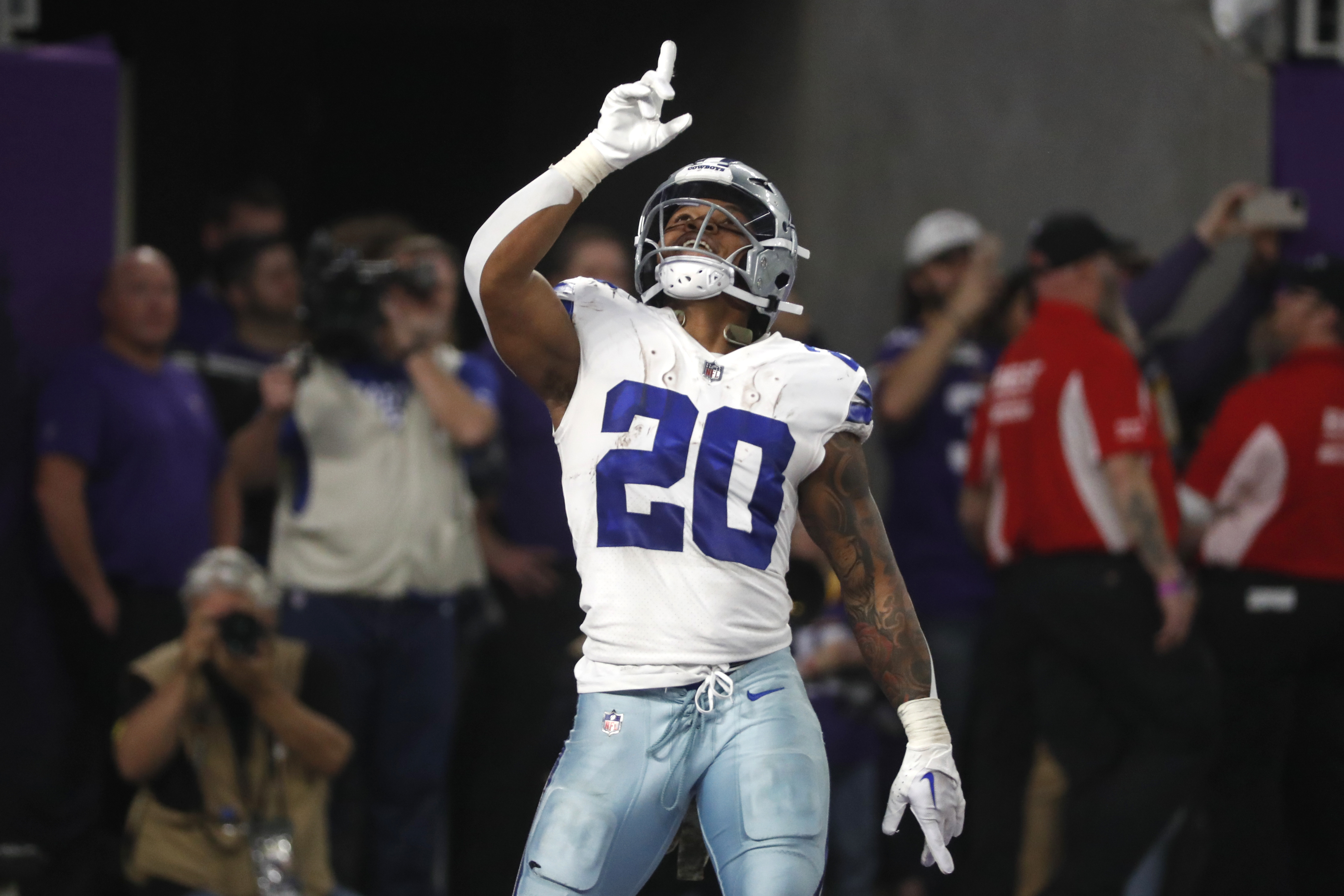 Dallas Cowboys running back Tony Pollard celebrates after catching a 30-yard touchdown pass during the first half of an NFL football game against the Minnesota Vikings, Sunday, Nov. 20, 2022, in Minneapolis. (AP Photo/Bruce Kluckhohn) 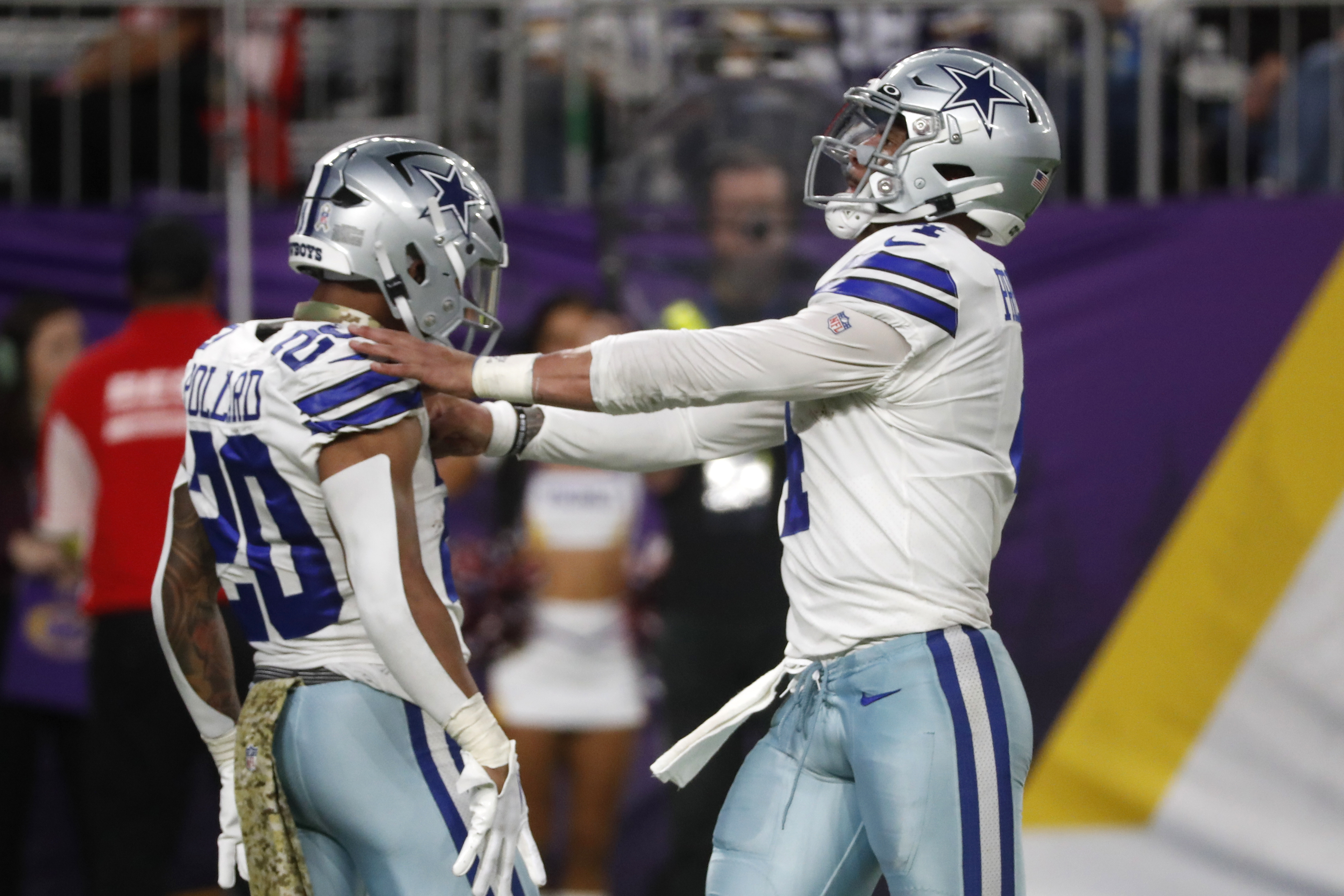 Dallas Cowboys running back Tony Pollard celebrates with teammate quarterback Dak Prescott (4) after catching a 30-yard touchdown pass during the first half of an NFL football game against the Minnesota Vikings, Sunday, Nov. 20, 2022, in Minneapolis. (AP Photo/Bruce Kluckhohn) 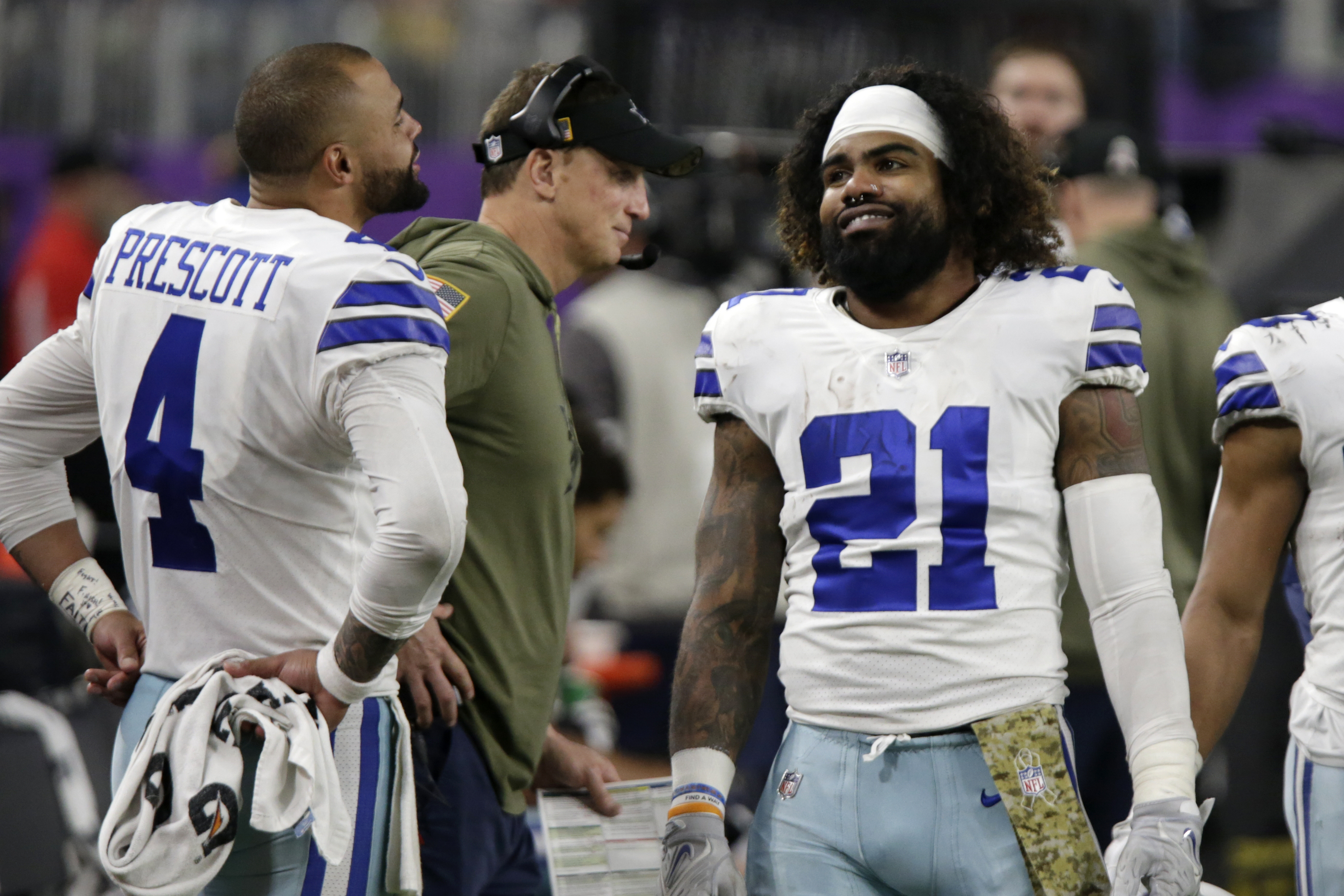 Dallas Cowboys running back Ezekiel Elliott (21) talks with teammate quarterback Dak Prescott (4) during the second half of an NFL football game against the Minnesota Vikings, Sunday, Nov. 20, 2022, in Minneapolis. (AP Photo/Andy Clayton-King) 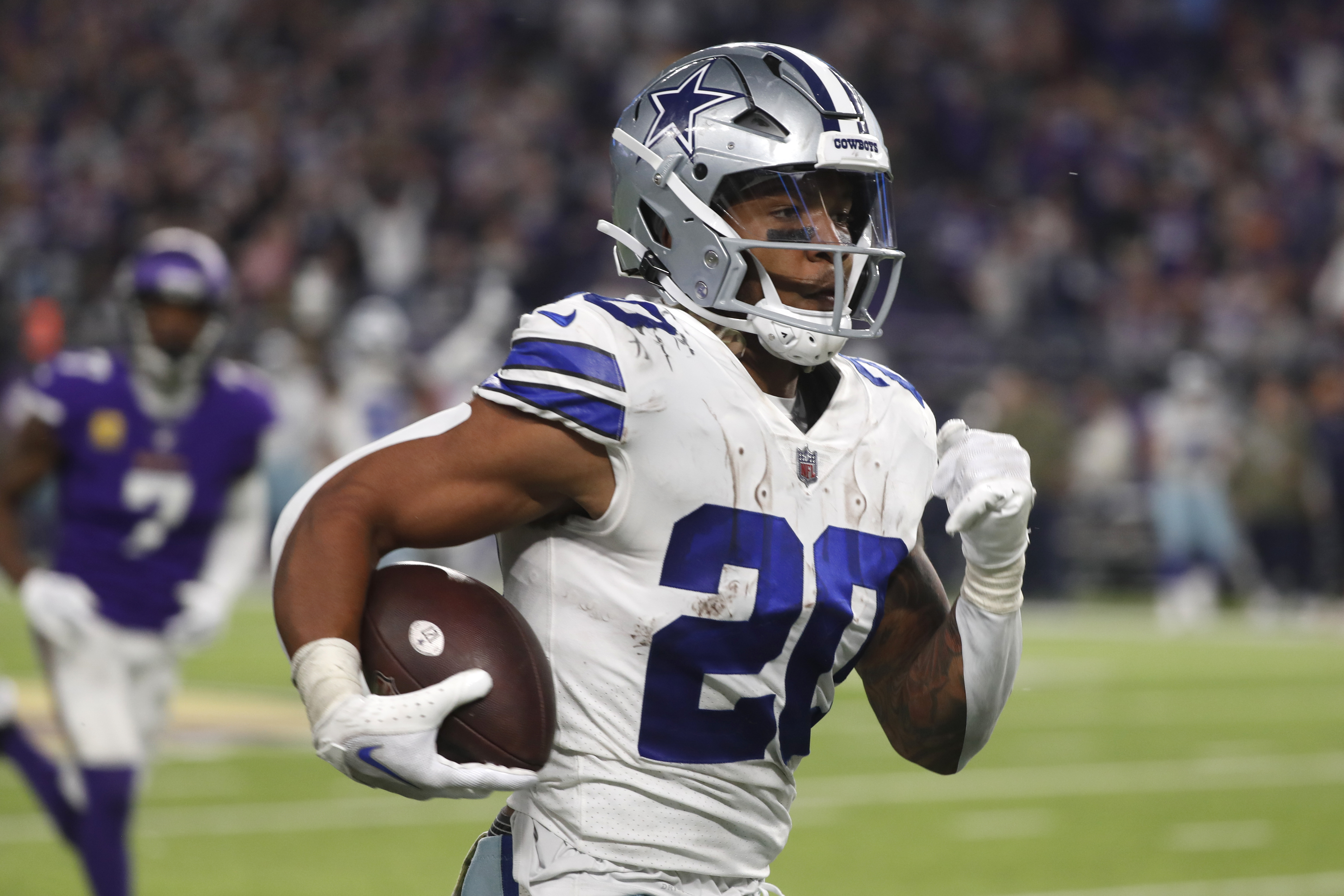 Dallas Cowboys running back Tony Pollard runs up field during a 68-yard touchdown reception in the second half of an NFL football game against the Minnesota Vikings, Sunday, Nov. 20, 2022, in Minneapolis. (AP Photo/Bruce Kluckhohn) 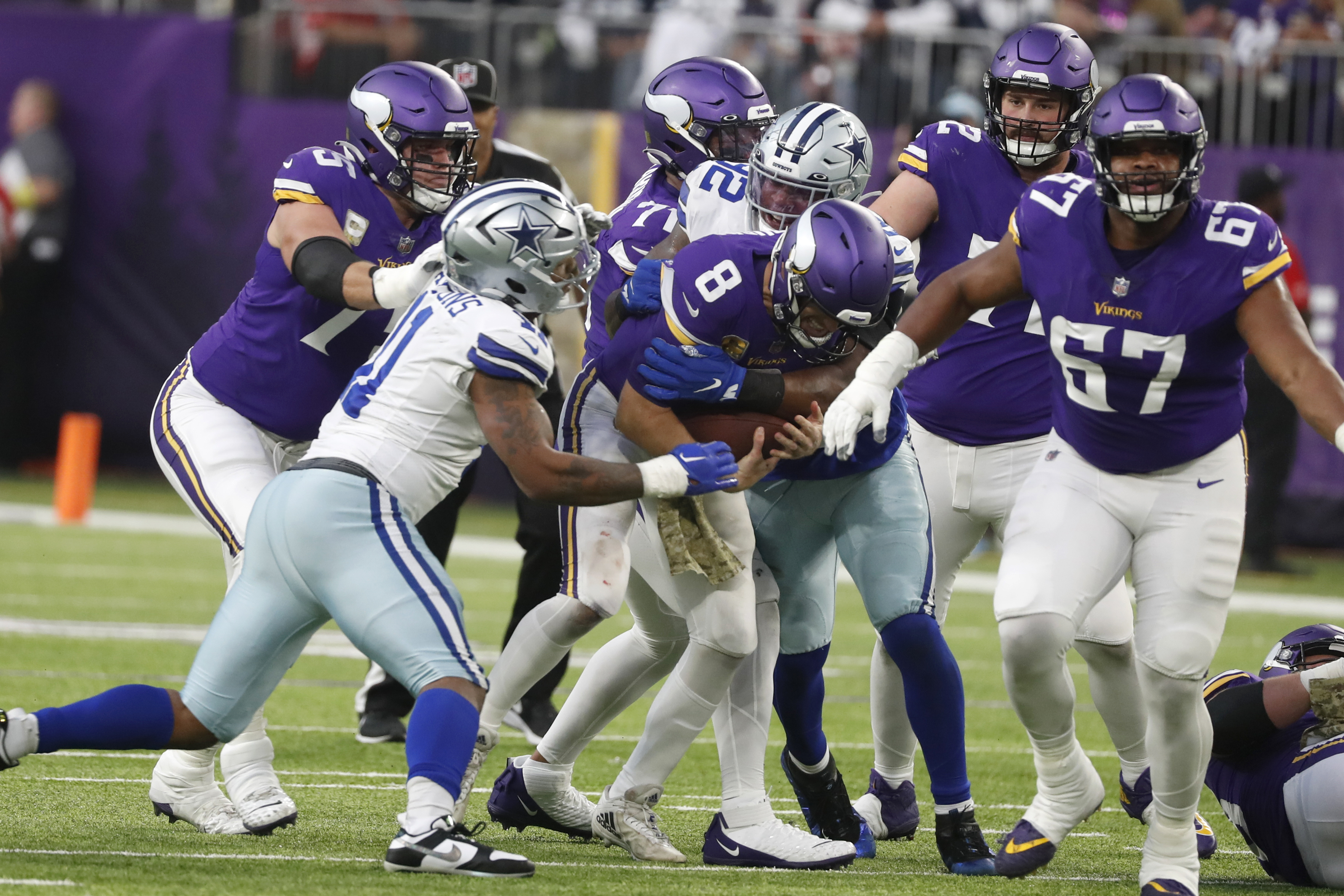 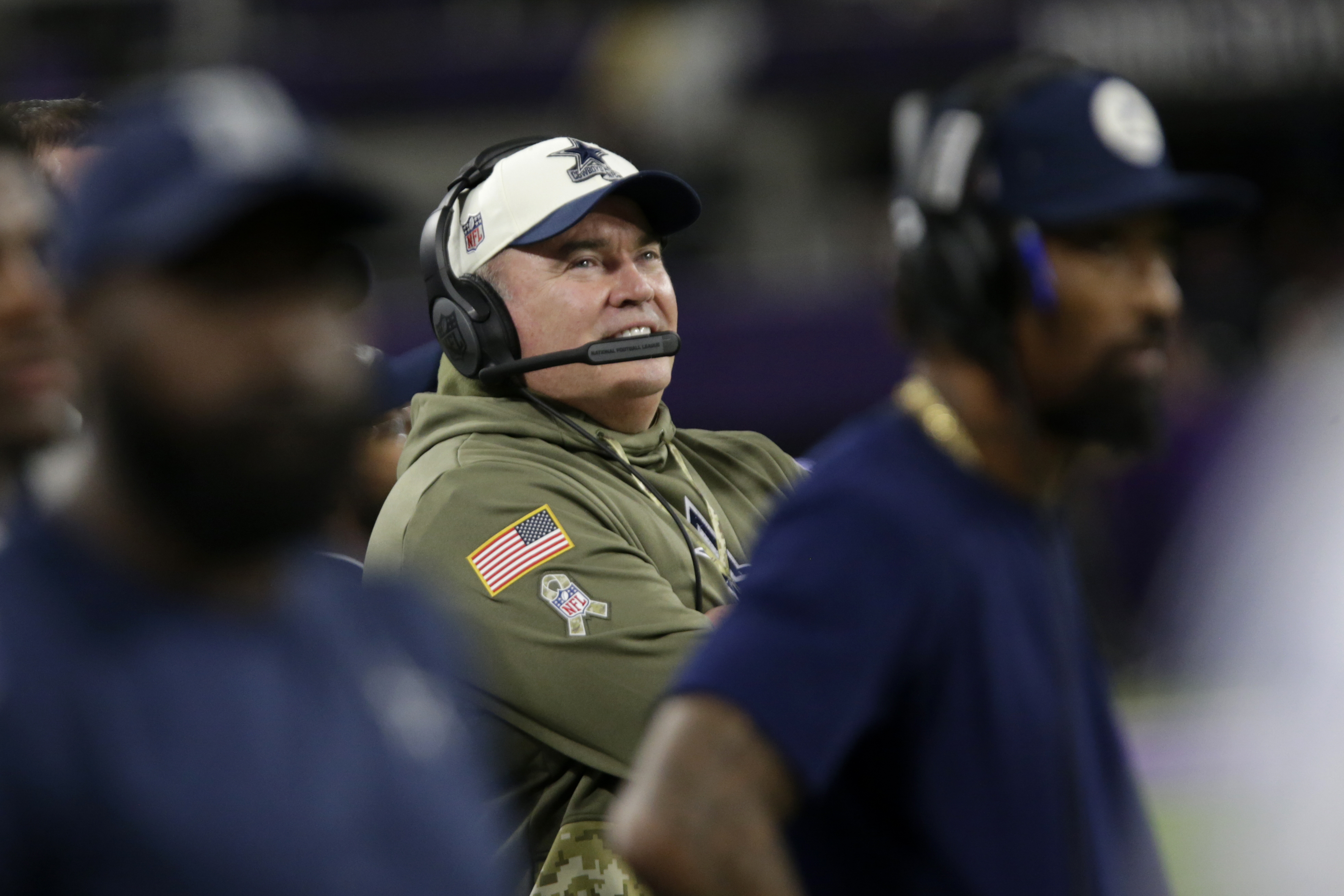 Dallas Cowboys head coach Mike McCarthy watches from the sideline during the second half of an NFL football game against the Minnesota Vikings, Sunday, Nov. 20, 2022, in Minneapolis. The Cowboys won 40-3. (AP Photo/Andy Clayton-King) 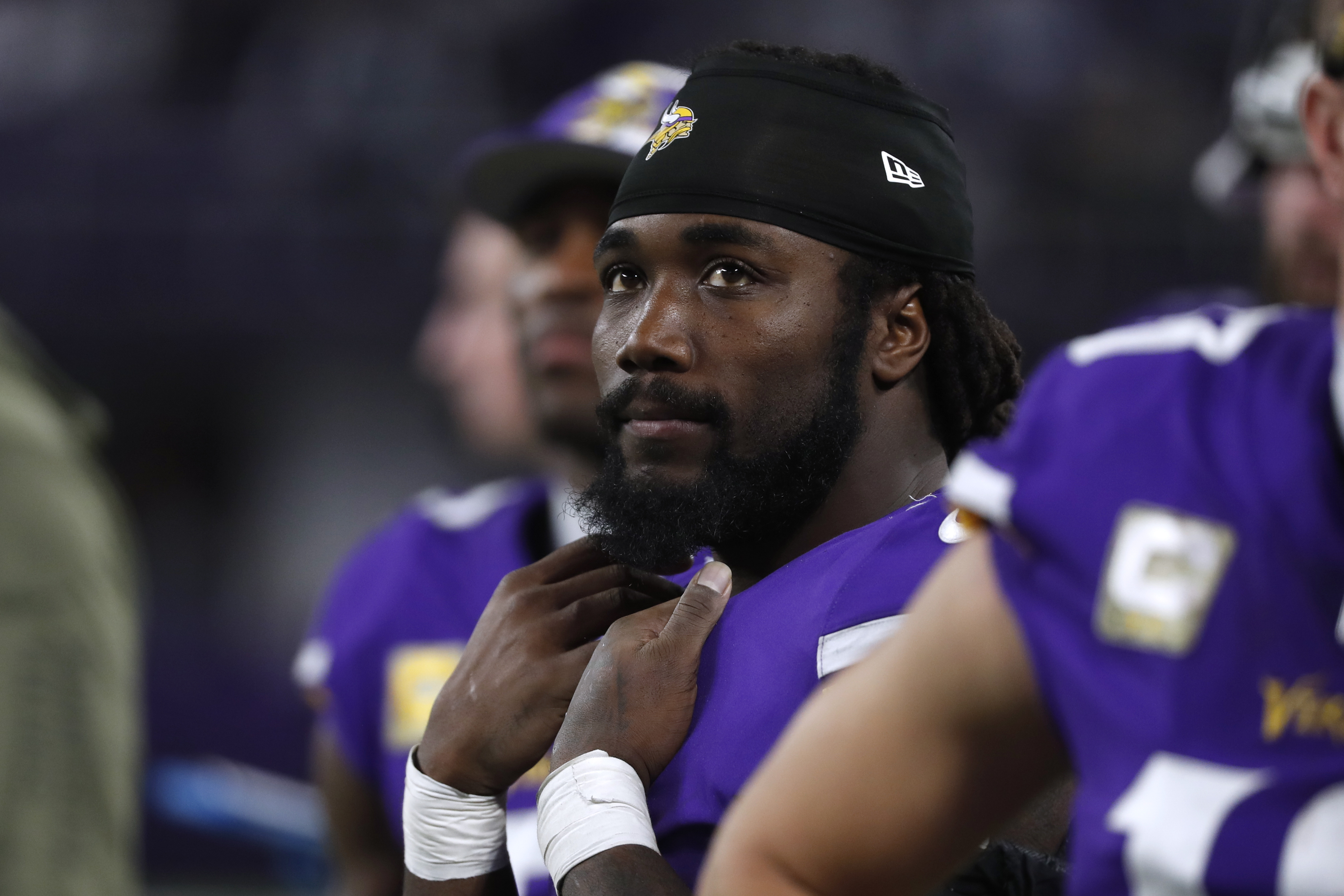 Minnesota Vikings running back Dalvin Cook watches from the sideline during the second half of an NFL football game against the Dallas Cowboys, Sunday, Nov. 20, 2022, in Minneapolis. The Cowboys won 40-3. (AP Photo/Bruce Kluckhohn)