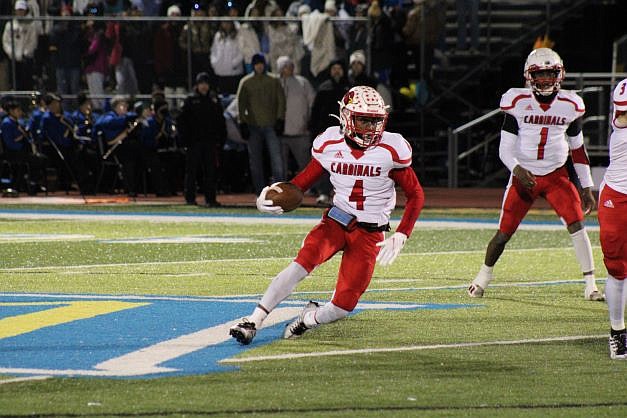 Photo By: Michael Hanich Camden Fairview wide receiver Trent Haygood runs after a handoff in the game against Valley View.

The Camden Fairview Cardinals went into their game Friday hoping to practice during the Thanksgiving break. In order to accomplish their goal, they had to defeat the Valley View Blazers on the road.

The Cardinals were in a bind Friday night, needing to make huge adjustments in the second half. Starting the second half down by seven, Camden Fairview (10-2) achieved a big comeback win thanks to huge plays on the offensive and defensive sides of the ball.

On the offensive side of the ball, the Cardinals faced a tenacious Blazers pass rush, encountering several blitzes up the middle. Camden Fairview eventually found ways to get the ball out quickly and pick up the blitzes from up the middle. Camden Fairview accumulated 385 total yards, 304 from the passing game. Sophomore wide receiver Trent Haygood was the player that made some of the biggest impacts at the most needed times.

Defensively, Camden Fairview had to battle to shut down a strong dual-threat Blazers offense led by a highly athletic quarterback in Carson Turley. The Cardinals needed to force as much pressure as they could on the passing game while keeping Turley in the pocket. At the same time, the Cardinals needed to take advantage of any mistakes the Blazers made. Senior defensive end D.J. King made the biggest plays for Camden Fairview in the playoffs so far, turning the tide on Valley View.

The Cardinals struggled to get their short-to-mid-range passing game established due to the pressure of Valley View's pass rush. Camden Fairview did find more time for senior quarterback Martavius Thomas to stay in the pocket and survey the field in the second half. Throughout the game Trent Haygood was increasingly able to get open for Thomas' passes, his speed and explosive route-running across the middle of the field allowing him to beat the defensive backs.

Haygood caught four receptions for 148 yards and a touchdown and rushed for 28 yards on two carries. He also had a big kickoff return for 41 yards that put Camden Fairview on the Blazers' 24 yard line in the second quarter to set up a five-play scoring drive, putting the score at 21-14 going into the second half.

Haygood's biggest play of the game came late in the fourth quarter as he beat a defensive back on a cross route for a solid gain. He took the ball for an explosive run after the catch for more than 45 yards, ending the drive with a 68 yard touchdown to put Camden Fairview up 26-21 with 3:22 left in the game.

On the defensive side of the ball, the Cardinals had many playmakers that contributed to their win last week. Despite times when the Cardinals would gather momentum on defense, Carson Turley would make plays with his legs. It took players like defensive end D.J. King to play smarter to disrupt Turley. King's abilities to be explosive off the edge, read the quarterback's eyes and identify the ball were big for the Cardinals to make efficient stops. Many of the key stops came in the second half, when the Blazers were shut out after scoring 21 points in the first half.

King accounted for five total tackles, two tackles for loss and a sack. He was highly efficient in securing tackles in the backfield and rarely missed a chance to tackle. He was key at shutting down potential running lanes from the outside as his teammates from the interior made multiple tackles.

King's biggest play of the game might also have been Camden Fairview's biggest play of the season. In the first play of the fourth quarter, Turley mishandled the snap from his center from shotgun. King was fast to react to the snap and went straight into the backfield, where he picked up the ball for a 60 yard return for a touchdown. That play by King was the momentum shift for the remainder of the game. Valley View only accounted for 48 total yards in the final four drives. Camden Fairview was able to score two drives later. 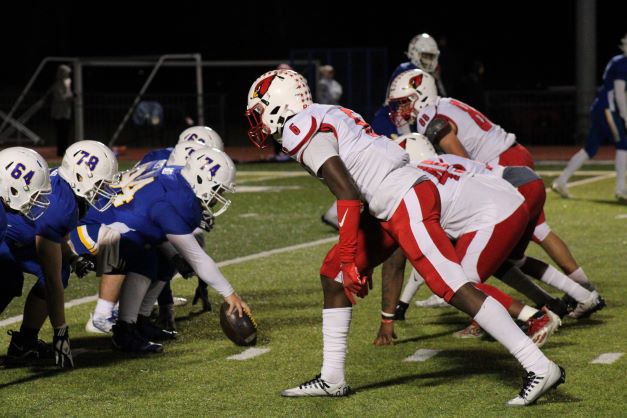 Photo By: Michael Hanich Camden Fairview defensive end D.J. King gets set for the snap in the game against Valley View.