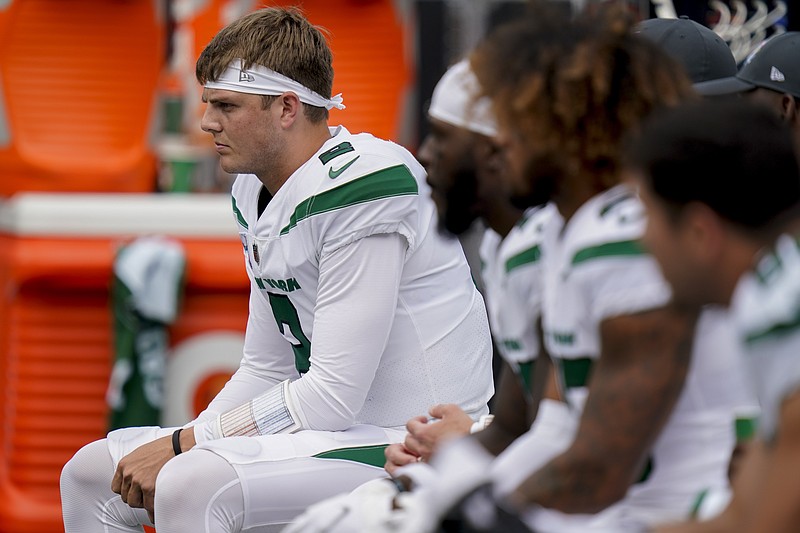 FILE - New York Jets quarterback Zach Wilson sits on the bench during the first half of an NFL football game against the Tennessee Titans, Sunday, Oct. 3, 2021, in East Rutherford. Zach Wilson has been benched by the New York Jets and will be replaced by Mike White as the starter Sunday against the Chicago Bears. Coach Robert Saleh announced the decision Wednesday, Nov. 23, after evaluating and discussing the situation with his assistants. (AP Photo/Seth Wenig, File)

FLORHAM PARK, N.J. (AP) -- Zach Wilson has gone from being the future of the New York Jets franchise to an underachieving benchwarmer.

Coach Robert Saleh announced the decision Wednesday to sit Wilson and replace him with Mike White as the starting quarterback Sunday against the Chicago Bears.

"Zach's career here is not over," Saleh said, adding that the plan is to have the second-year quarterback "reset" with the hope Wilson plays again this season. "This is not putting a nail in his coffin."

Joe Flacco will serve as White's backup, and Wilson will not be active against the Bears.

"We haven't wavered in our belief that he's going to be the future of this franchise," Saleh said.

Saleh didn't commit Monday to having Wilson under center this week after the second-year quarterback's dismal performance in the Jets' 10-3 loss to the Patriots in New England. The No. 2 overall pick in the draft last year was 9 of 22 for a measly 77 yards with several wayward throws. The Jets managed just 2 total yards on seven possessions in the second half.

"I wouldn't necessarily say surprised because I haven't been doing my job," Wilson said of the benching. "Of course I would like to not agree with the decision and everything, but it comes down to I have to play better.""

Saleh said he'll evaluate the quarterback position on a day-to-day basis, and added the entire offense must be better.

"His decision-making has been fine, his practice habits and all that stuff have been fine," Saleh said of Wilson. "But there are some basic fundamental things that have gotten really out of whack for him. This is just an opportunity for him to sit back, focus on those things, find a way to reconnect with all the different things we fell in love with during the draft process.

"And it's something I feel he's going to be able to do."

Wilson has taken a lot of criticism this week not only for his play on the field, but how he handled his postgame news conference. When asked if he thought he and the offense let down the defense -- which sacked Mac Jones six times -- Wilson replied curtly: "No. No."

It appeared to be a lack of accountability and Saleh acknowledged there might have been "a little irritation," but insisted Wilson's comments had no bearing on the decision. Saleh said Wilson addressed the team, but declined to share details.

Wilson didn't realize how his postgame comments came across until his father texted him before he got on the team bus asking him what he said.

"I have an opportunity to turn the page as a player as a leader and take a step forward."

Wilson is 5-2 this season as the starter of the Jets, who are off to a surprising 6-4 start and in the middle of the playoff hunt. But he has struggled with consistency and not shown the progress expected of him. Wilson has just four touchdown passes and five interceptions in seven starts.

Flacco, who started the first three games while Wilson was sidelined with a knee injury, still leads the Jets with five TD throws despite not having played since Sept. 25. Flacco was dropped to No. 3 behind White on the team's depth chart a few weeks ago.

"He's more than capable of getting it done," LaFleur said of White.

White briefly became a bit of a folk hero for the Jets last season during a four-game stretch that included three starts -- and one that landed his jersey and a game ball in the Pro Football Hall of Fame.

Making his first NFL start against Cincinnati on Oct. 31, 2021, in place of an injured Wilson, White completed 37 of 45 passes for 405 yards and three touchdowns with two interceptions in a 34-31 victory. He joined Cam Newton (2011) as the only players since 1950 to pass for at least 400 yards in their first career start. White's 37 completions were the most by a player in his first start.

He injured his right forearm early in his next start and was forced out of the Jets' 45-30 loss at Indianapolis. White made the start in New York's next game against Buffalo, but was intercepted four times in the 45-17 defeat. He hasn't taken a snap in a regular-season game since. 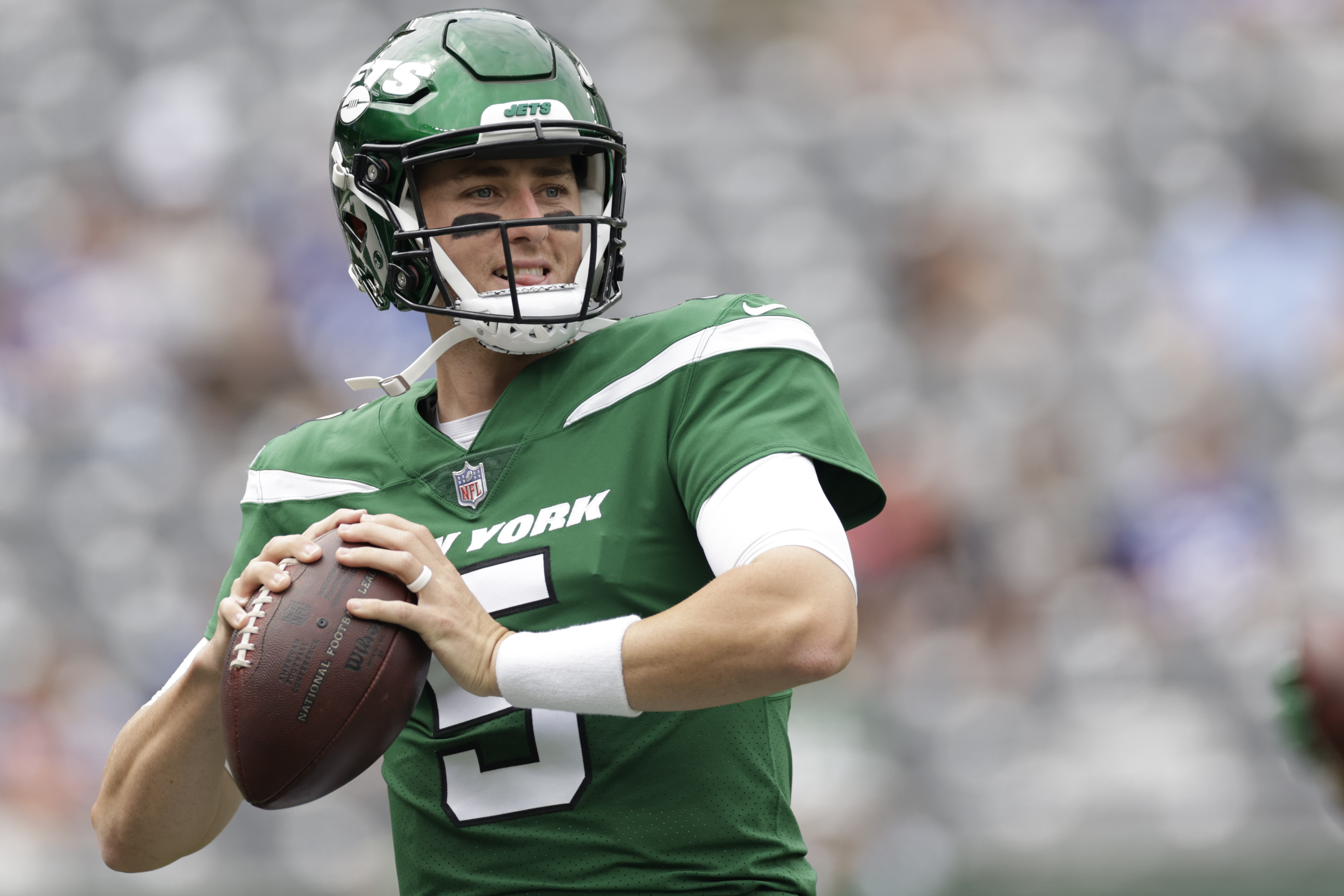 FILE - New York Jets quarterback Mike White (5) practices before a preseason NFL football game against the New York Giants, Sunday, Aug. 28, 2022, in East Rutherford, N.J. Zach Wilson has been benched by the New York Jets and will be replaced by Mike White as the starter Sunday against the Chicago Bears. Coach Robert Saleh announced the decision Wednesday, Nov. 23, after evaluating and discussing the situation with his assistants. (AP Photo/Adam Hunger, File)