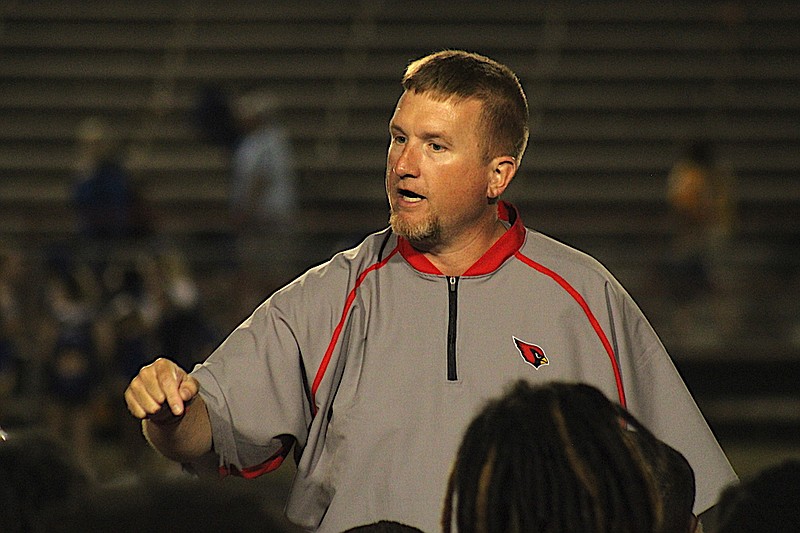 Photo By: Michael Hanich Camden Fairview head coach Nick Vaughn talks to his team after the win over Lakeside.

The first weekend of October is set to bring two of the most anticipated conference matchups this 2022 season. The Camden Fairview Cardinals (4-1; 2-0 in 5A South Conference play) will go on the road this Friday night to take on their biggest conference rival in the Magnolia Panthers (5-0; 2-0). The Harmony Grove Hornets (4-2; 2-0 in 3A-6 Conference play) will go on the road to take on the Rison Wildcats (4-1; 1-0).

Both Camden Fairview and Harmony Grove have been playing highly efficient on both sides of the ball as their goals of a conference championship title continues to grow. The Cardinals are looking to repeat as 5A South Conference champions after clearing all six conference games last season. There would be some challenges this 2022 season to the 5A South Conference with Magnolia having more experienced players as well as the addition of the Parkview Patriots.

The only loss the Cardinals have suffered this season was in week zero as they lost at home 41-21 to the Arkadelphia Badgers. It was after that game that the Cardinals gained some consistency and rhythm on the offensive side of the ball. Since then, the Cardinals have been solid on offense and defense. The defense is starting to come together as they will be tested this Friday against the Panthers. Camden Fairview will look to slow down one of the top running backs in the state in Magnolia's Garrion Curry, who has rushed for 920 yards and 12 touchdowns on 98 carries. Camden Fairview will look to their defensive line for solid support on Friday's night.

Since 2001, the Cardinals have led the series 13-8 over the Panthers. Camden Fairview has won four of the last five games versus Magnolia. Last season, the Cardinals defeated the Panthers 44-25 at home after a tremendous set of performances from junior quarterback Martavius Thomas, senior running back Ja'Coriae Brown and junior wide receiver Jarvis Reed. The Cardinals' offense accumulated 601 total yards while the defense held the Panthers to only 295 total yards.

The Cardinals will look to create another electric performance on the offensive side of the ball. Defensively, they will be in for a serious against this rushing offense of Magnolia. With this game being a rivalry, the Cardinals will come into the game disrespected after being placed in third place of the 5A South Preseason Coaches poll behind Parkview and Magnolia. This is a game the players and coaches for Camden Fairview have been eagerly waiting for.

For Harmony Grove, they are a team that has been rising through the ranks of conference title contenders for the past four three seasons. This year is a great chance for the Hornets to take that title with the McGehee Owls, last year's 3A-6 conference champs, moving up to 4A play. Harmony Grove knew one of their biggest challengers in conference play this season were the Rison Wildcats.

Since 2001, Rison leads the series over Harmony Grove, but within the past five years, it has been the Hornets that has been the better team. The Hornets have won the past three matchups with the last Rison win coming in the 2016 season.

Harmony Grove won last year's matchup at home 41-30 after trailing 22-14 at halftime. Without two of the top running backs, sophomore quarterback Caleb Johnson had a statement game as he completed 11-of-18 of his passes for 611 yards and five touchdowns. The young defense found their footing in the second half by playing more aggressive at the line of scrimmage.

Rison continues to maintain a stable and consistent offense as the Wildcats average 35.5 points per game in a run-heavy offense. The Hornets' defense has been highly efficient throughout the season as they have allowed an average of 16.7 points per game. Harmony Grove has only had two games this season where they allowed more than two touchdowns this season.

This game will be the first time that Hornets head coach Ernie Horstkamp and Rison offensive coordinator Greg Anthony will face other. The last time the two coaches faced each other was in the 2009 Harmony Grove vs. Bearden game when Anthony was the head coach of the Bears. Harmony Grove won the road 54-0 in a game where Anthony felt Horstkamp was running the score up. Harmony Grove and Bearden never scheduled a game together as a result of that situation. 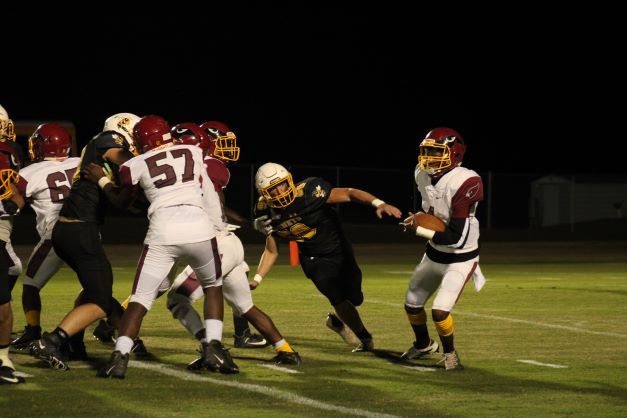 Photo By: Michael Hanich Harmony Grove Hornets defensive end Christian Barnes chases after the quarterback in the game versus Dollarway.