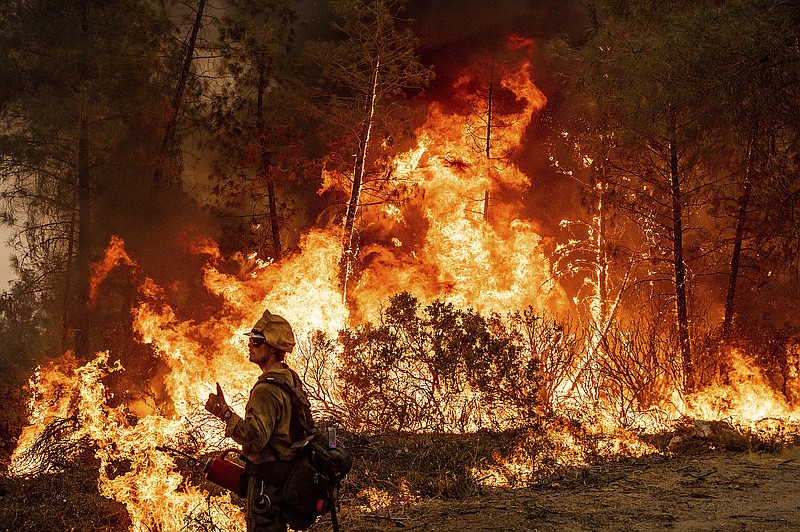 FORESTHILL, Calif. -- Calmer weather in Northern California helped firefighters battle a smoky wildfire threatening thousands of mountain homes on Monday, while remnants of last week's Pacific hurricane continued to produce thunderstorms that caused flash flooding in the southern part of the state, where crews made headway against another huge blaze.

Major fires were also burning in Oregon and Washington, blanketing swaths of the Western states in thick smoke and prompting alarms about unhealthy air quality.

The Mosquito Fire in the foothills east of Sacramento spread to nearly 73 square miles (189 square kilometers), with 10% containment, according to the California Department of Forestry and Fire Protection, or Cal Fire.

Forecasters predicted a respite from the hot and gusty weather that dogged firefighters last week, but possible fuel sources from fine grass to big trees remain very dry and flammable, according to a Cal Fire incident report Sunday night.

After a reconnaissance flight Sunday afternoon, Incident Commander Rick Young said that although the fire's growth had slowed, "where it was burning, it was really burning."

More than 5,800 structures in Placer and El Dorado counties were under threat and some 11,000 residents of communities including Foresthill and Georgetown were under evacuation orders.

The 44-square-mile (114-square-kilometer) blaze was more than half-contained Monday morning. The fire has destroyed at least 30 homes and other structures in Riverside County. Two people died while fleeing the blaze Sept 5.

The southern part of the state welcomed the cooler weekend weather after what's left of Hurricane Kay veered off the Pacific Coast and faded, helping put an end to blistering temperatures that nearly overwhelmed the state's electrical grid.

But unstable air persisted and powerful thunderstorms unleashed flash floods that inundated roads and highways across inland areas. More than 50 people were rescued after mudslides trapped at least 24 cars and a responding fire truck in the mountainous Lake Hughes area north of Los Angeles on Sunday. No injuries were reported.

To the north, remnants of Kay caused flooding Saturday that stranded about 40 vehicles and closed a stretch of State Route 190 in Death Valley National Park.

Smoky skies from wildfires in many areas of the West caused air quality to deteriorate Monday, with dangerous levels of particulate pollution from wildfires detected in portions of eastern Oregon and Washington, Northern California, central Idaho and western Montana.