Saints QB Winston gets another shot at Brady’s Bucs 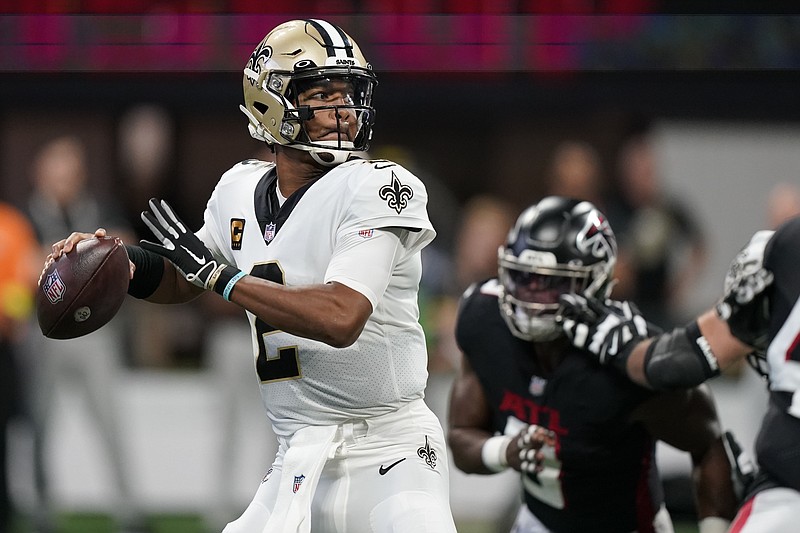 New Orleans Saints quarterback Jameis Winston (2) works in the pocket against the Atlanta Falcons during the first half of an NFL football game, Sunday, Sept. 11, 2022, in Atlanta. (AP Photo/Brynn Anderson)

As he did, it was apparent Winston wasn't too interested in dwelling on the moment his 2021 season ended with a left knee injury on a tackle by Buccaneers linebacker Devin White.

"Hopefully, I don't have to relive that moment again," said Winston, who missed the last nine games of last season while recovering from reconstructive surgery. "I'm just pressing forward and keeping my eyes focused on this week."

The Buccaneers (1-0) are back in New Orleans (1-0) on Sunday in a game that would give the winner an early lead in the NFC South.

The Saints by contrast, needed the largest fourth-quarter comeback in franchise history to prevail at Atlanta, scoring 17 straight points inside the final 12 minutes to win 27-26.

Now Winston gets his second start against the team that drafted him first overall in 2015, but let him go in 2020 when Brady chose to sign with the Bucs after two decades with New England.

"They're just another team. I've got a lot of respect for a lot of those players, some of my old teammates," Winston said. "But, at the end of the day, it's a division game, going against the best in Tom Brady. But I don't get to go against him. I get to go against Devin White and (linebacker) Lavonte David, and (safety) Antoine Winfield and (defensive tackle) Vita Vea and (edge rusher) Shaq Barrett."

While Brady won a Super Bowl in his first season with Tampa Bay and made the playoffs in his second, the Bucs have gone 0-4 in regular-season games against New Orleans during that span. Brady has thrown eight interceptions in those losses.

"That's probably the thing that jumps out the most -- turnovers," Brady said. "They are a very physical team. I think they beat us up physically. It's a tough, hard-nosed team. They're very well coached."

Saints first-year coach Dennis Allen was New Orleans' defensive coordinator for the first three of those games and served as interim coach in a 9-0 victory at Tampa Bay last December, when Sean Payton stayed home because of a positive COVID-19 test.

Bucs coach Todd Bowles hopes his offense has a better plan for Allen's unit this time.

"Anytime you lose to a team more than once or twice," Bowles said, "you try to put a finger on what they're trying to do and what you're doing -- and what you can do differently."

Winston said White reached out to him after the injury last year and that there are no hard feelings.

"Me and him are great. I can't be mad at somebody for playing football," Winston said. "He felt bad for a second, but he's a football player. He's a great football player, so he kept going."

White, who grew up in Louisiana and starred at LSU, said he loves returning to his home state to face the Saints and their rabid fans in the Superdome.

"You want to shut that crowd up. It's better than getting your own crowd hyped," the fourth-year pro said. "If everybody takes that same approach -- make them be quiet and don't give them (anything) to cheer about -- it will all play out in our favor."

Last season, Saints QBs didn't have the option of throwing to Michael Thomas, who was injured, Jarvis Landry, who was acquired in free agency this offseason, or Chris Olave, the club's top draft pick last spring.

The three combined for 212 yards and two TDs receiving last week at Atlanta.

"It's fun. I've been there before," Winston said, recalling his days in Tampa Bay with Mike Evans, Chris Godwin and ex-Buc DeSean Jackson. "When things are in sync and you execute, beautiful things happen. You have those targets and those competitors on the outside, you do your best to get them the ball."

Receiver Julio Jones made his debut for the Bucs with three receptions for 69 yards last week. He spent 10 of his first 11 seasons in the NFC South with the Atlanta Falcons, so he is familiar with the Saints. In 18 career games against New Orleans, Jones has 102 receptions for an average of 15.8 yards per catch and three touchdowns.

"The more we run the ball, the more it tires them out and we can kind of pound on them a little bit," right tackle Tristan Wirfs said. "If we're throwing the ball a ton, we're just playing into their hands."

Tampa Bay Buccaneers quarterback Tom Brady (12) signals to the sideline as he stands by the offense on the field in the second half of a NFL football game in Arlington, Texas, Sunday, Sept. 11, 2022. (AP Photo/Michael Ainsworth)

Tampa Bay Buccaneers running back Leonard Fournette (7) carries the ball against the Dallas Cowboys in the second half of a NFL football game in Arlington, Texas, Sunday, Sept. 11, 2022. (AP Photo/Michael Ainsworth)