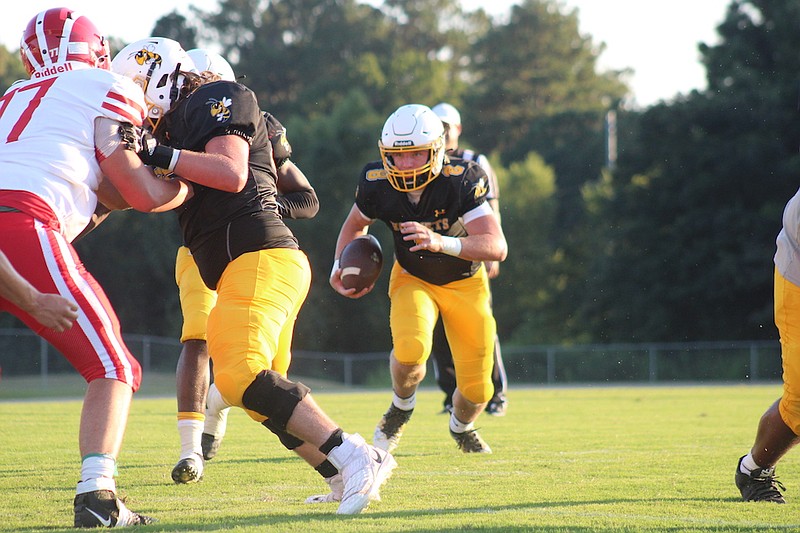 Photo By: Michael Hanich Quarterback Caleb Johnson runs for a touchdown set by the offensive line in the game against Cave City.

The Harmony Grove Hornets opened the fourth week of the 2022 season back home as they hosted the Cave City Cavemen this Friday night in an earlier kickoff. The Hornets were looking to get their first win since August 26, while the Cavemen were looking to get their first win of the season. Harmony Grove started the game with a lead and did not look back as they were able to score every offensive possession. The defense stalled a talented run-heavy offense of Cave City. Harmony Grove got back on track in its final non-conference game of the season as they defeated Cave City 54-14.

Cave City started the game with a few first downs, but its drive ended on a turnover on downs from a tackle for loss from Hornets sophomore defensive tackle Peyton Ross. The offense for the Hornets was on the scoreboard in four plays as they kept on the ground. Sophomore Damariyon Billingly's 22-yard touchdown capped off a four-play, 70-yard drive to put Harmony Grove 7-0.

The next play from scrimmage, Hornets defensive end Brock Simon chased down the ball carrier after a 17-yard run and forced the ball out. Senior defensive tackle Kameron Heard recovered the fumble for the second turnover on Cave City.

Harmony Grove wasted no time to get into the end zone as Johnson would find his brother in senior wide receiver Gabe Johnson for a 43-yard pass. That play would set up a five-yard rushing touchdown from Caleb Johnson up the middle. Tyler McCann's PAT would put Harmony Grove up 14-0.

After a three-and-out from the defense of the Hornets, junior DaVonta Hubbard took the punt of Cave City and returned for a 47-yard return. It only took three plays for the Hornets to find the endzone, once again, on a one-yard touchdown run from Johnson, his second rushing touchdown of the game. Harmony Grove was able to extend its lead 21-0 over Cave City.

The offense of Cave City finally saw some success with its offense as they were able to create its first score of the game. The Cavemen knew they had mixed up some of their typical run schemes by utilizing a passing game. Cavemen quarterback Jacob Moore was finding ways to drive the ball down the field with his legs and his arm. After an 18-yard run from his running back, the Cavemen found the endzone for the first time in the game with a one-yard run from Moore. That whole drive of Cave City took 12 plays to create a score.

Harmony Grove wasted no time creating a scoring drive back as it only took seven plays to score again. The touchdown was set up with a 25-yard pass from Caleb Johnson to Gabe Johnson. Three plays later, Billingly found the end zone on a two-yard run. Harmony Grove took back its three-possession lead 28-7, with 7:52 left in the second quarter.

On the first play of the next drive for Cave City, Moore threw a costly interception to Hornets safety Javion Gill. After getting the ball in Cavemen territory, the Hornets were able to score quickly on a 28-yard touchdown run from Billingly, his third touchdown of the game. This score put the Hornets up 35-7 with 5:28 left in the second quarter.

The defense of Harmony Grove was more aggressive at the line of scrimmage, but Moore was doing a good job of escaping the pocket to either extend the play or look for receivers open. On the drive's third play, Moore found an open receiver for a 29-yard passing play. Just as Cave City felt confident in Hornets territory, the defensive line finally got to the quarterback. Hornets junior Christian Barnes got to Moore for a sack, followed by a quarterback pressure from sophomore linebacker Justin Tillery to force an incomplete pass. On third and 17 on the 21-yard line, Moore could not secure the low snap as Peyton Ross picked up the fumble recovery for another Cavemen turnover.

In the final drive of a dominating first half for Harmony Grove, Johnson found senior Bryce Holeman for a 23-yard passing play. Two plays later, Johnson found wide receiver Andrew Taylor on a 37-yard play-action pass for a touchdown. McCann's PAT put Harmony Grove up 42-7 with nine seconds to go in the first half.

After halftime, the Hornets picked right where they left off with a successful eight-play drive from their second-team offense. The drive resulted in a two-yard touchdown run from senior running back Lane Davis. The missed two-point conversion put the Harmony Grove Hornets up 48-7.

With the mercy clock rolling, the Cavemen wanted to make the most of their limited time as they kept their first-team offense in while the Hornets had their second-team defense in. Cave City established one more solid drive of 12-plays for 71-yards, resulting in a seven-yard touchdown from Seth Walling. That touchdown reduced Harmony Grove's lead to 48-14 with 7:50 left in the game.

In the final drive of the Hornets' offense, they got the ball around the 45-yard, but it only took four plays to get into the end zone. Senior Shamar Patterson ran the ball for the final three plays for 46 yards, with him scoring on a seven-yard run. The missed two-point conversion gave the Hornets the 54-14 lead with limited time left for Cave City to establish any efficient drive.

The offensive line for the Hornets had their best performance of the season as they opened clear running lanes at the line of scrimmage for the ballcarriers of the Hornets. They also kept Johnson secure in the pocket as he rarely left the pocket due to the opposing pressure of the defense.

Head coach Ernie Horstkamp after the game had this to say about the offensive line, "those guys have thoroughly come a long way and that group usually takes a little bit to jell, but they've come to work every day and definitely had their best performance tonight."

The defense of the Hornets had some big moments against an aggressive run-heavy offense of Cave City. The Hornets held the Cavemen to only 268 total yards on nine drives. Harmony Grove was able to get into the backfield early and often as they accounted for five tackles for loss and a sack. They also forced Cave City to turn the ball over five times.

"There's not much to complain about tonight. Putting up points and scoring touchdonwns every offensive drive tonight, it was best best offensive performance this season," coach Horstkamp said after the game. Overall, I'm very pleased with special teams, offense, adn defense; all play very well."

The Harmony Grove Hornets (2-2) start 3A-6 conference play next Friday on the road as they take on the Drew Central Pirates (2-1). 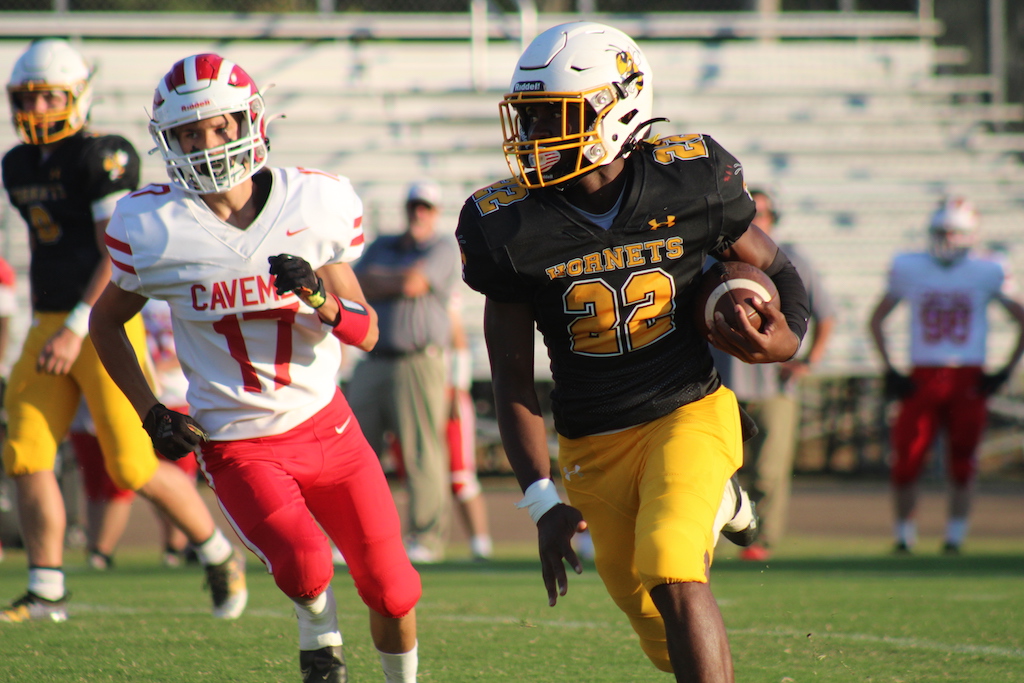 Photo By: Michael Hanich Harmony Grove running back Damariyon Billingly runs for a big play in the game against Cave City. 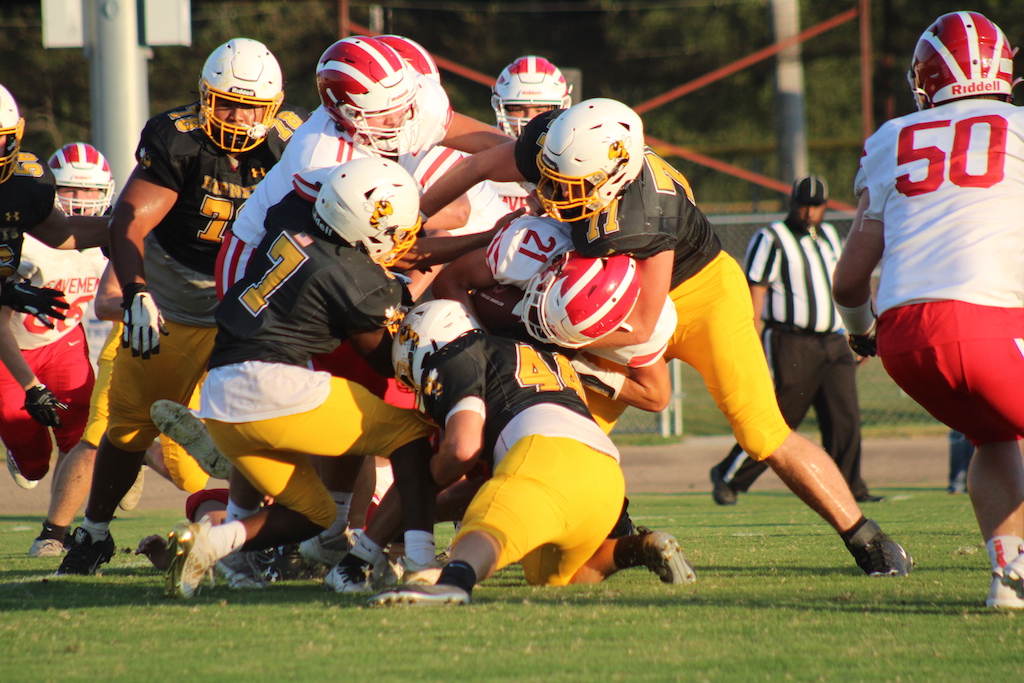 Photo By: Michael Hanich Harmony Grove defenders DaVonta Hubbard, Brock Simon and Lane Davis all combine in for a tackle in the game against Cave City. 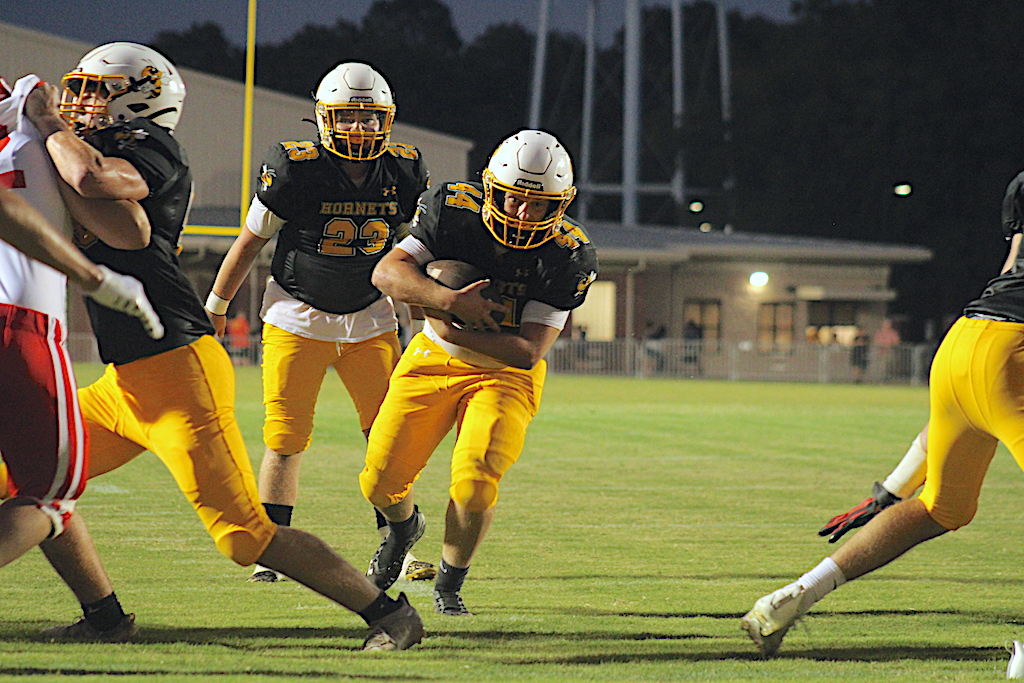