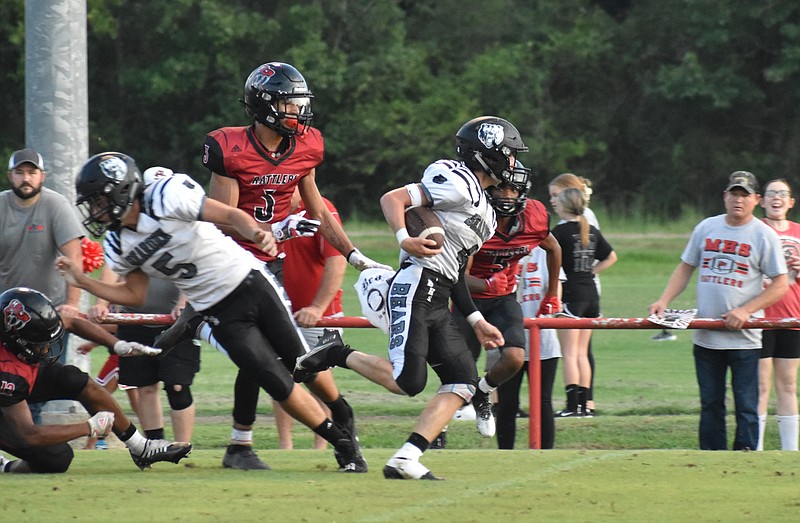 Photo By: Britney Boroughs Bearden sophomore Tristan Olvey runs for a big gain in the game against Mursfreeboro.

After a week off, the Bearden Bears were back on the field this past Friday as they hosted their first game of the 2022 season against the Mineral Springs Hornets. The Bears had a challenge on their hands as they faced a completely revitalized Hornets' team with a 2-1 record after not winning a single game in the previous season. Bearden was looking to win its first win of the season and its first win since 2020.

While Bearden took a lead through the first quarter, turnovers plagued the Bears, once again, as Mineral Springs were able to capitalize on the turnovers. Mineral Springs accounted for a huge second half as Bearden fell at home 48-6.

The Bears' defense started the game strong, forcing four turnover on downs. Bearden had several chances to capitalize on the success from the defense as they encountered two fumbles. Bearden was able to get on the board first on a 75-yard deep pass from freshman quarterback Markevius Jimerson to senior Royce Cones to take the 6-0 lead.

In the second quarter, the defense of both teams played strong to hold any drives from being established. Bearden had a chance to keep another low-scoring game in their hands similar to Murfreesboro, but a fumble a punt allowed Mineral Springs to capitalize as they recovered the fumble at the Bearden 4-yard line. Mineral Springs scored one play and converted the two-point conversion to take the 8-6 lead.

After coming out of halftime down 8-6, Bearden looked to push the ball more down the field. Jimerson, however, had his first interception of the first drive in the third quarter intercepted and returned for a Mineral Springs touchdown to go up by two possessions.

The Bears' offense was driving the ball down the field for several plays, but the drive ended after Jimerson threw another interception. That interception would set up another score for Mineral Springs one play into the drive.

The offense of Bearden accumulated 256 total yards, with 124 coming from the rushing game. Senior Thomas Brunston rushed for 71 yards on 12 carries. Jimerson completed 7-of-19 for 132 yards, a touchdown and three interceptions. He also rushed for 38 yards on five carries.

The defensive side of the ball for Bearden, the Bears held their own on drives that was not set up by turnovers for Mineral Springs. Bearden's defense only allowed 312 total yards, with 251 coming from the rushing game. 185 of the rushing yards came in the second half when turnovers put the defense into uncomfortable situations.

Bearden head coach Brandon Austin talked about his team's performance and push for hope for the remainder of the 2022 NFL season, "turnovers were the downfall for us. Mineral Springs did not turn the ball over, and we did eight times. That let the game get away after a very promising first half. We have to be able to put together a complete game. That being said, Mineral was an extremely talented football team, and I think, going into conference play, our non-conference resume is a lot better than our 0-3 record. We have seen some very good teams. We have to clean up the turnovers and we have a chance to finish a game in our favor."

The Bearden Bears (0-3) will have a tough start in conference play as they host the Carlisle Bison (3-0) this upcoming Friday night.