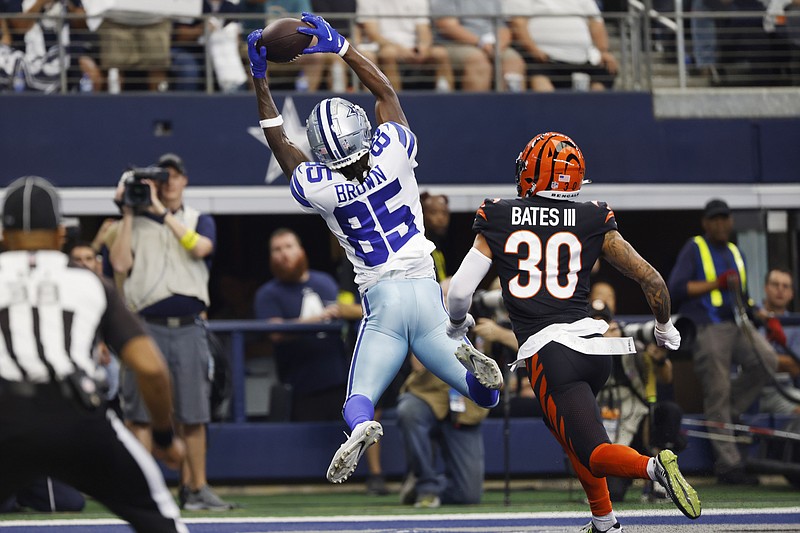 ARLINGTON, Texas (AP) -- Cooper Rush had no choice but to smile as he embraced offensive coordinator Kellen Moore after the winning kick for the Dallas Cowboys.

Dak Prescott's backup now has a 2-0 career record filling in, with winning drives on his final possession both times. That was enough to let the emotion flow for the normally stoic Rush, at least for a few moments.

"It's actually exciting to see him be excited after he won a game," coach Mike McCarthy after a 20-17 victory over Cincinnati on Sunday. "To get a charge out of it because he is so, so consistent."

Rush led the drive to Brett Maher's 50-yard field goal as time expired, and the Cowboys held on after losing a two-touchdown halftime lead.

Joe Burrow got the defending AFC champion Bengals even at 17-17 by leading a 19-play, 83-yard drive in the fourth quarter, throwing a 5-yard touchdown pass to Tee Higgins and finding Tyler Boyd for the 2-point conversion.

Cincinnati (0-2) erased the same 17-3 deficit in the opener against Pittsburgh, only to miss two chances to win on a PAT kick in the final seconds of regulation and a short field goal in overtime of the 23-20 loss.

Now the Bengals are the first defending AFC champion to start 0-2 since 1999, when Denver was coming off consecutive Super Bowl victories and started 0-4 after John Elway retired.

"You just can't let it affect you," said defensive end Sam Hubbard, who had the only sack of Rush. "People look to you and your demeanor, how you handle yourself and all you can do is go back to work. And I'm excited to get back to work."

After the Cowboys stopped the Bengals with about a minute remaining, Rush got the defending NFC East champs in range for Maher. This after his only previous NFL start last year, when the sixth-year pro threw the go-ahead touchdown pass in the final minute of a 20-16 win at Minnesota.

Rush got the winning drive going with a 12-yard completion to Noah Brown, who had his first NFL touchdown on the opening drive and finished with a career-high 91 yards receiving. A 10-yarder to CeeDee Lamb put the Cowboys (1-1) in range for Maher, who kicked a 54-yarder in the first half.

"I felt like I put a good stroke on it to see it go in," said Maher, a former Dallas kicker who rejoined the club late in training camp when both kickers competing for the job flopped. "It was just mayhem, to be honest with you."

Prescott, who wore a headset with a long-sleeve shirt and frequently implored the crowd to make noise, just missed the one start last season with a strained calf. He will be out multiple games this time with a fracture near his right thumb.

Rush directed 75-yard touchdown drives on the first two possessions for Dallas after the Cowboys went without a TD in the opener against Tampa Bay. The Cowboys didn't find the end zone again, but didn't need to on the final possession after Trevon Diggs stopped Boyd 2 yards short on third-and-3, forcing a punt with 1:09 remaining.

"It got a little choppy, kinda got out of rhythm there in the third," said Rush, who was 19 of 31 for 235 yards with a touchdown. "You just keep playing. When you're out there, that's all you're really thinking about is next play, next play, next play."

The Cowboys sacked Burrow six times in the first three quarters after he went down seven times in the opener against the Steelers. But the revamped offensive line protected him well enough to help the Bengals get even.

On the tying drive that consumed nearly nine minutes, Burrow converted a fourth-and-6 with a completion to Ja'Marr Chase after three third-down conversions.

"We'd like to start faster, but the defenses that we're getting earlier are always different than the ones that are on the film," said Burrow, who was 24 of 36 for 199 yards with a touchdown. "That probably plays a part in it, but we've just got to do a better job of adjusting faster."

Tony Pollard had a 46-yard catch on a shovel pass, taking the ball from behind the line of scrimmage to just inches shy of the goal line on a play that was originally ruled at touchdown. He got the short carry for a 14-3 Dallas lead in the first quarter.

NFL Defensive Rookie of the Year Micah Parsons had two sacks along with Dorance Armstrong for Dallas. Parsons has at least two sacks in five of the first 18 games of his career, joining Mark Anderson, Joey Bosa, Elvis Dumervil, Clay Matthews and Aldon Smith among players with five such games among their first 20.

Bengals TE Drew Sample was ruled out with a right knee injury after going down awkwardly on a tackle on a catch for a 4-yard loss in the second quarter. ... WR Tee Higgins played after being listed as questionable with a concussion.

Bengals: At the New York Jets next Sunday. Cincinnati has lost 10 of its past 11 road games against the Jets. 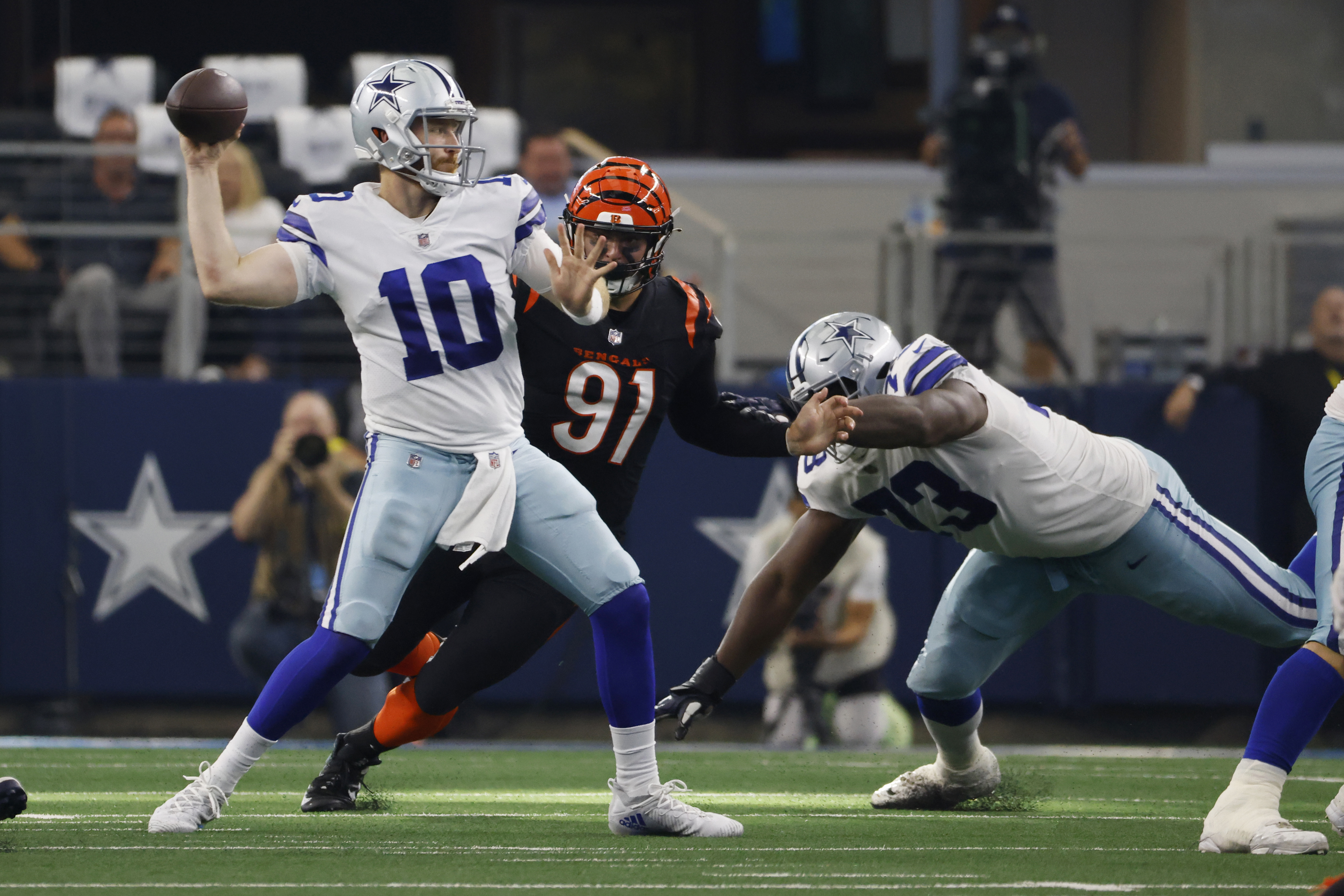 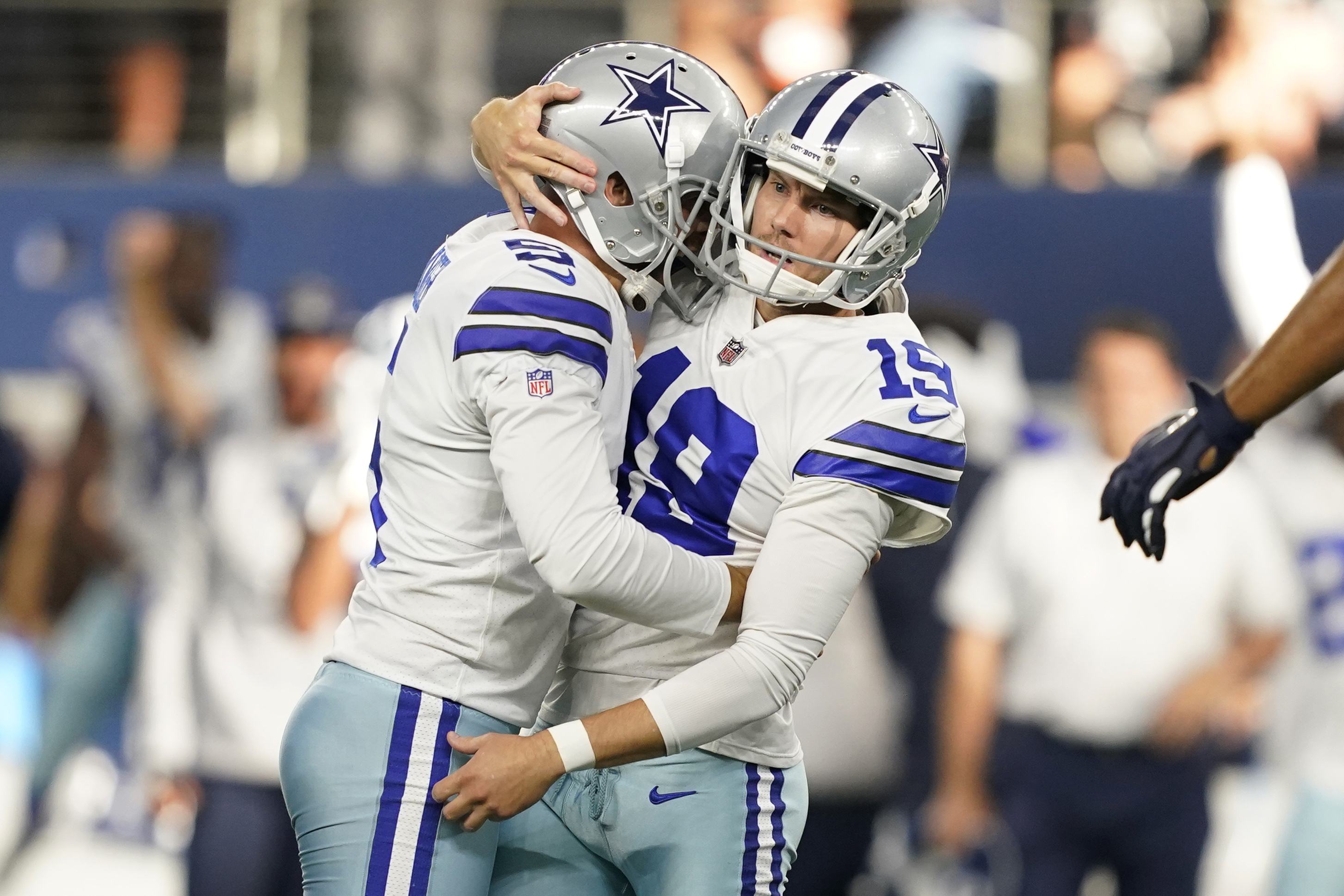 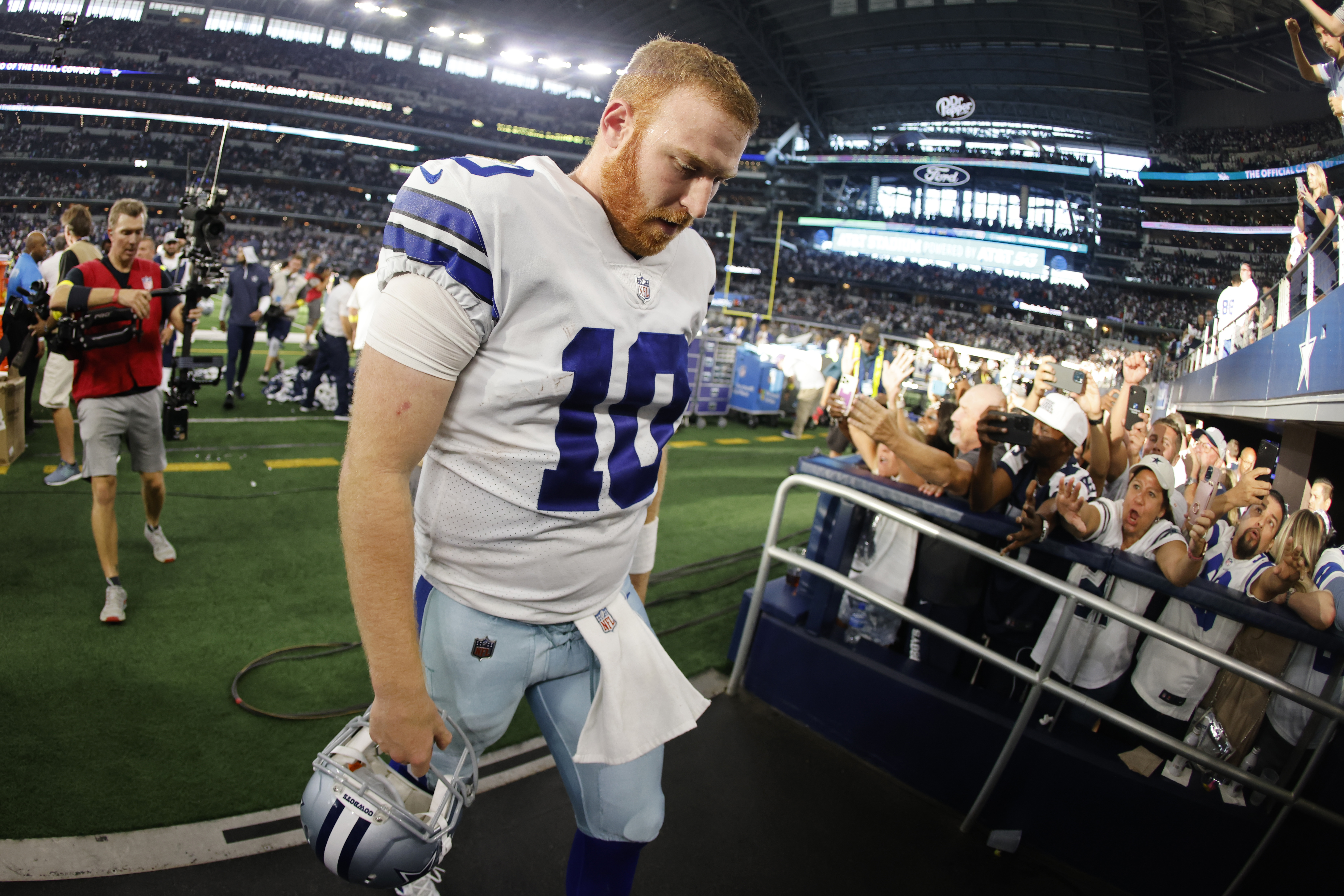 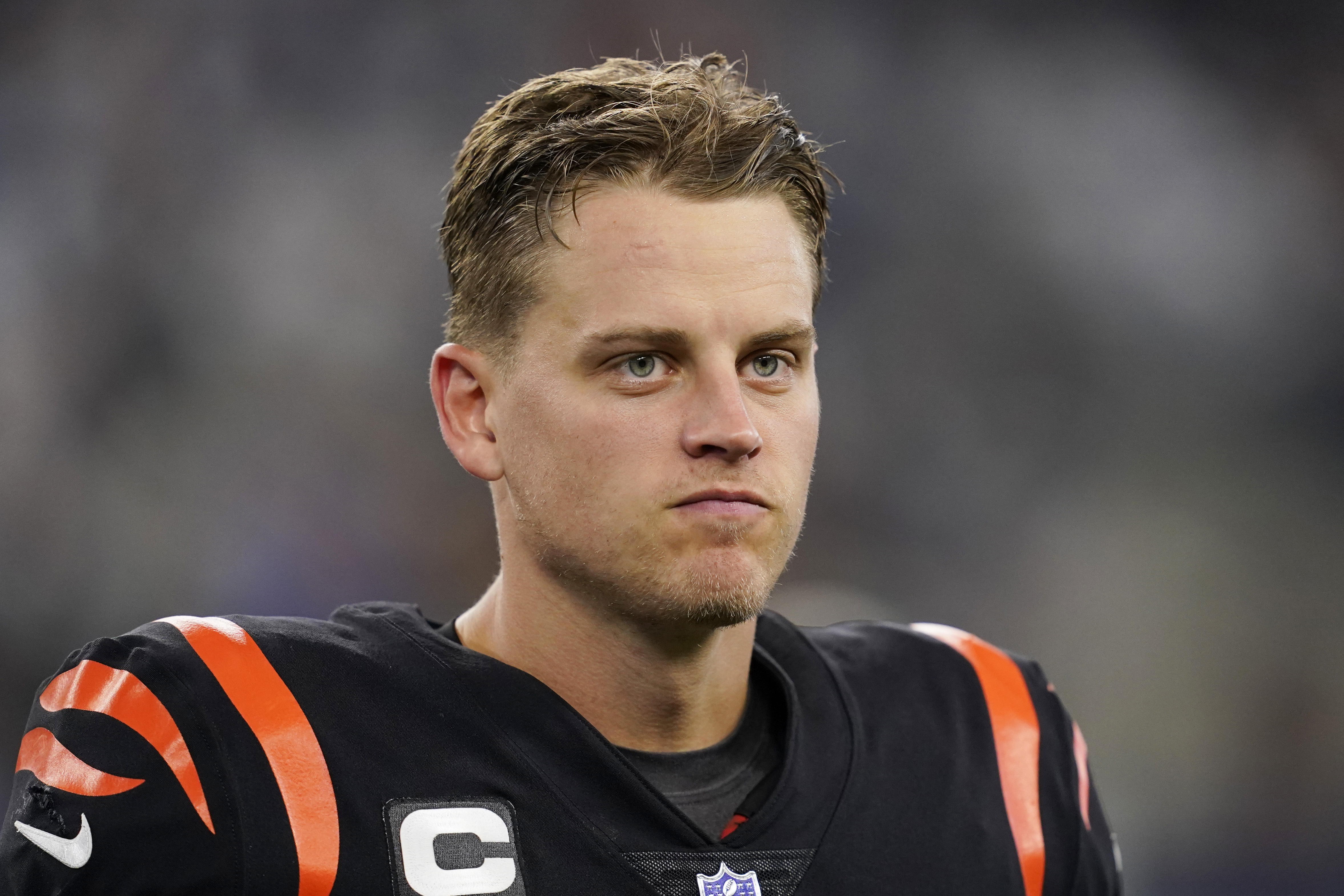 Cincinnati Bengals quarterback Joe Burrow (9) walks off the field after his 20-17 loss to the Dallas Cowboys after an NFL football game Sunday, Sept. 18, 2022, in Arlington, Tx. (AP Photo/Tony Gutierrez) 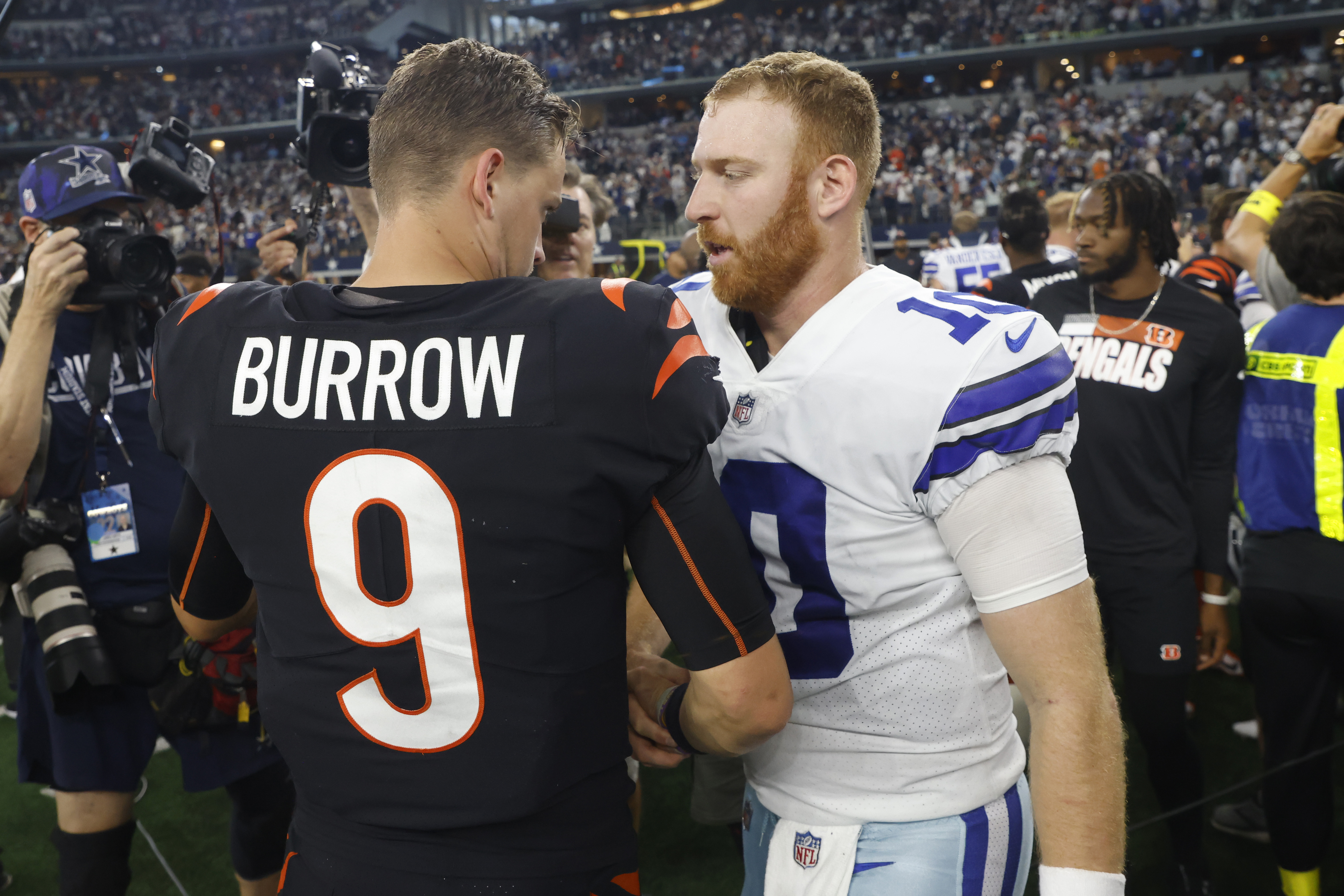 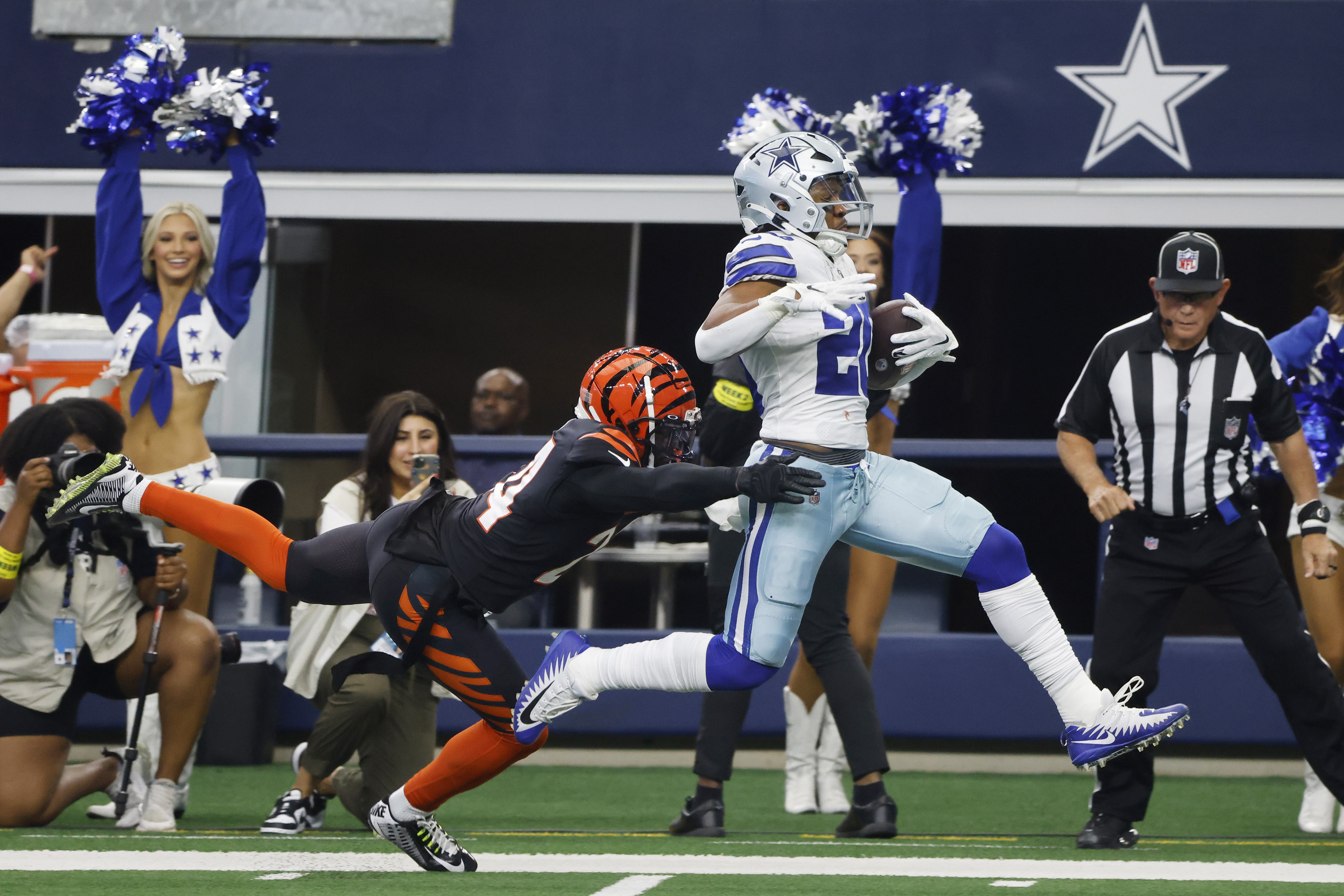 Dallas Cowboys running back Tony Pollard (20) gets close to the end zone as Cincinnati Bengals safety Vonn Bell (24) makes the stop during the first half of an NFL football game Sunday, Sept. 18, 2022, in Arlington, Tx. (AP Photo/Michael Ainsworth) 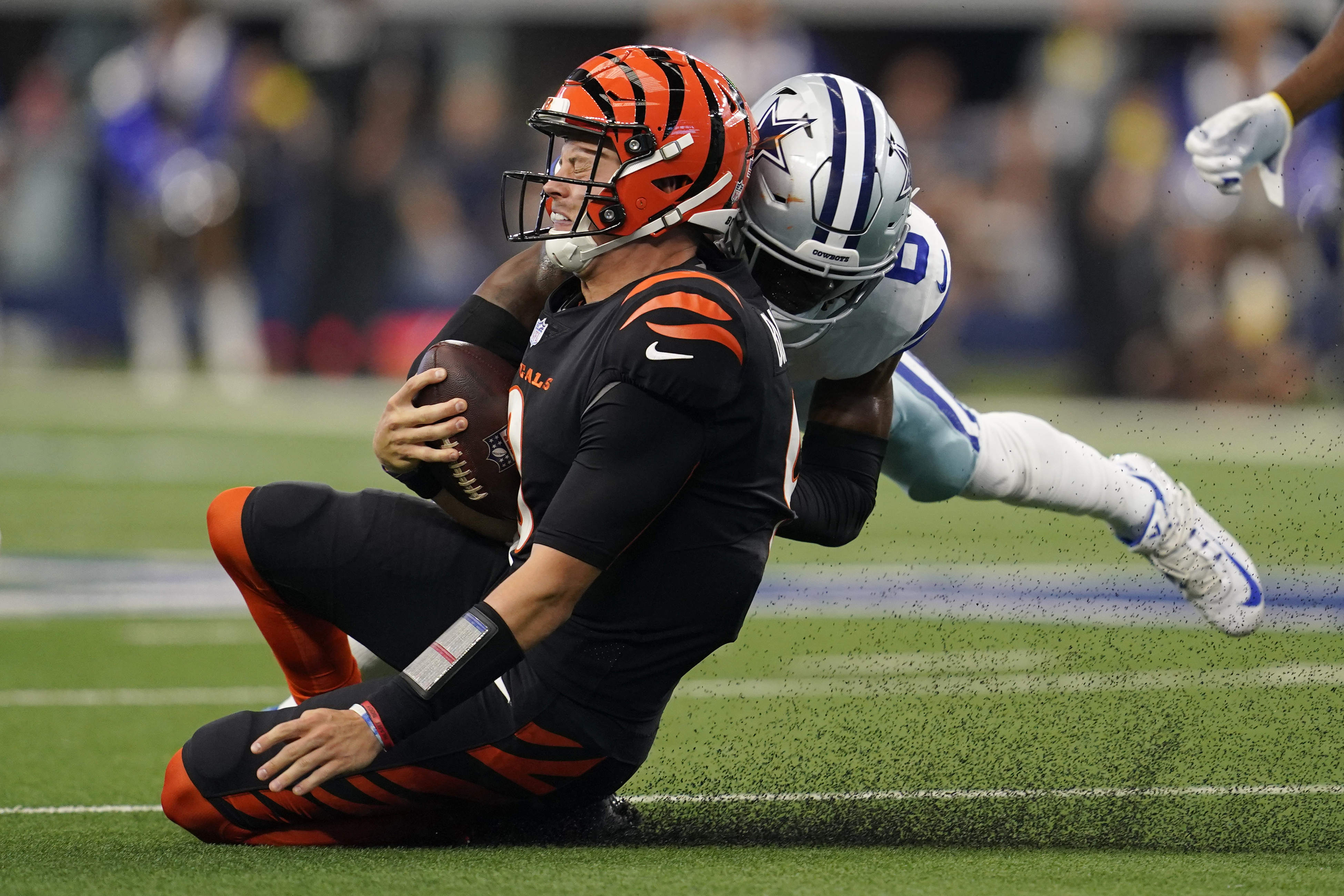 Cincinnati Bengals quarterback Joe Burrow (9) reacts to a late hit by Dallas Cowboys safety Donovan Wilson (6) after a scramble during the first half of an NFL football game Sunday, Sept. 18, 2022, in Arlington, Tx. (AP Photo/Tony Gutierrez) 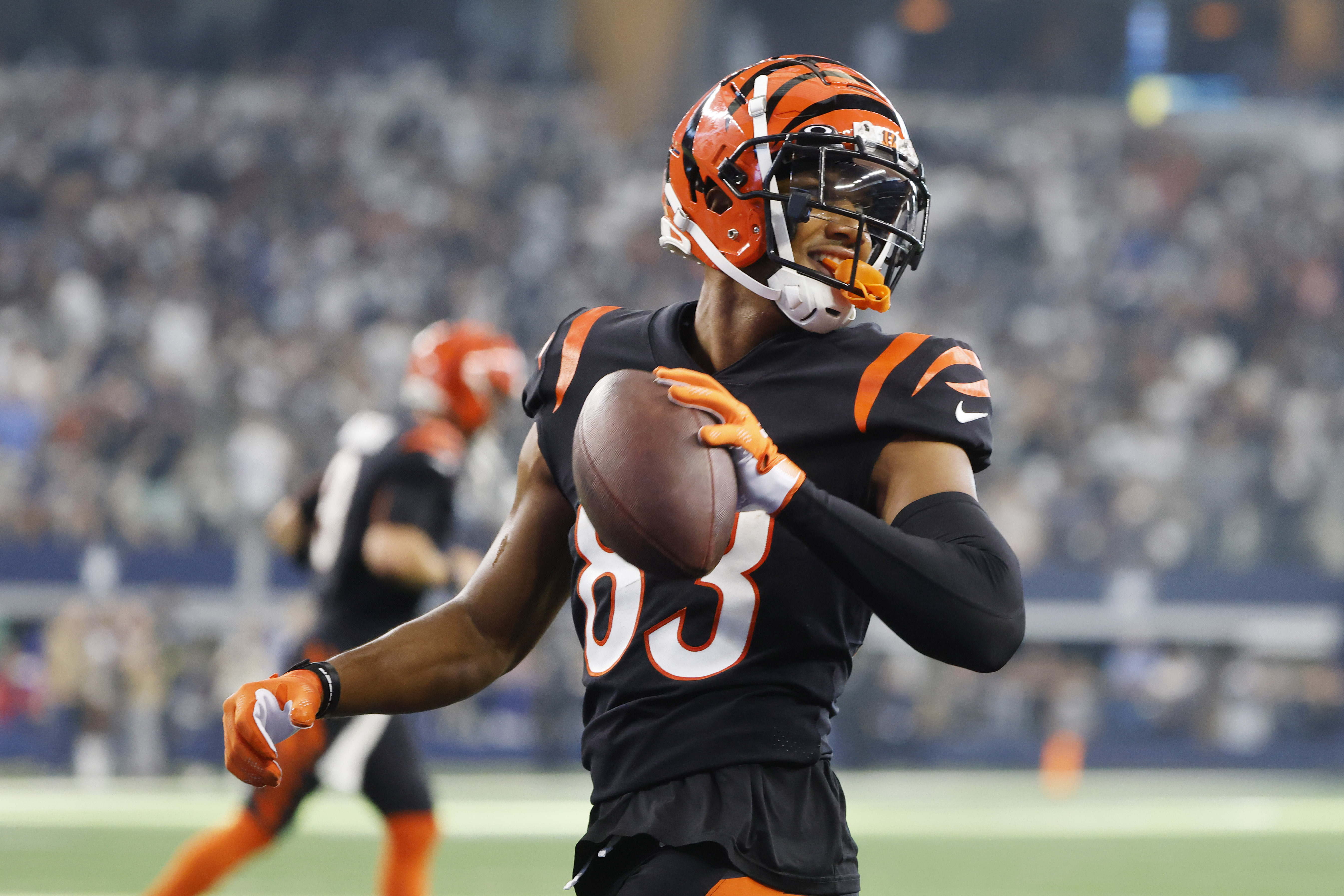 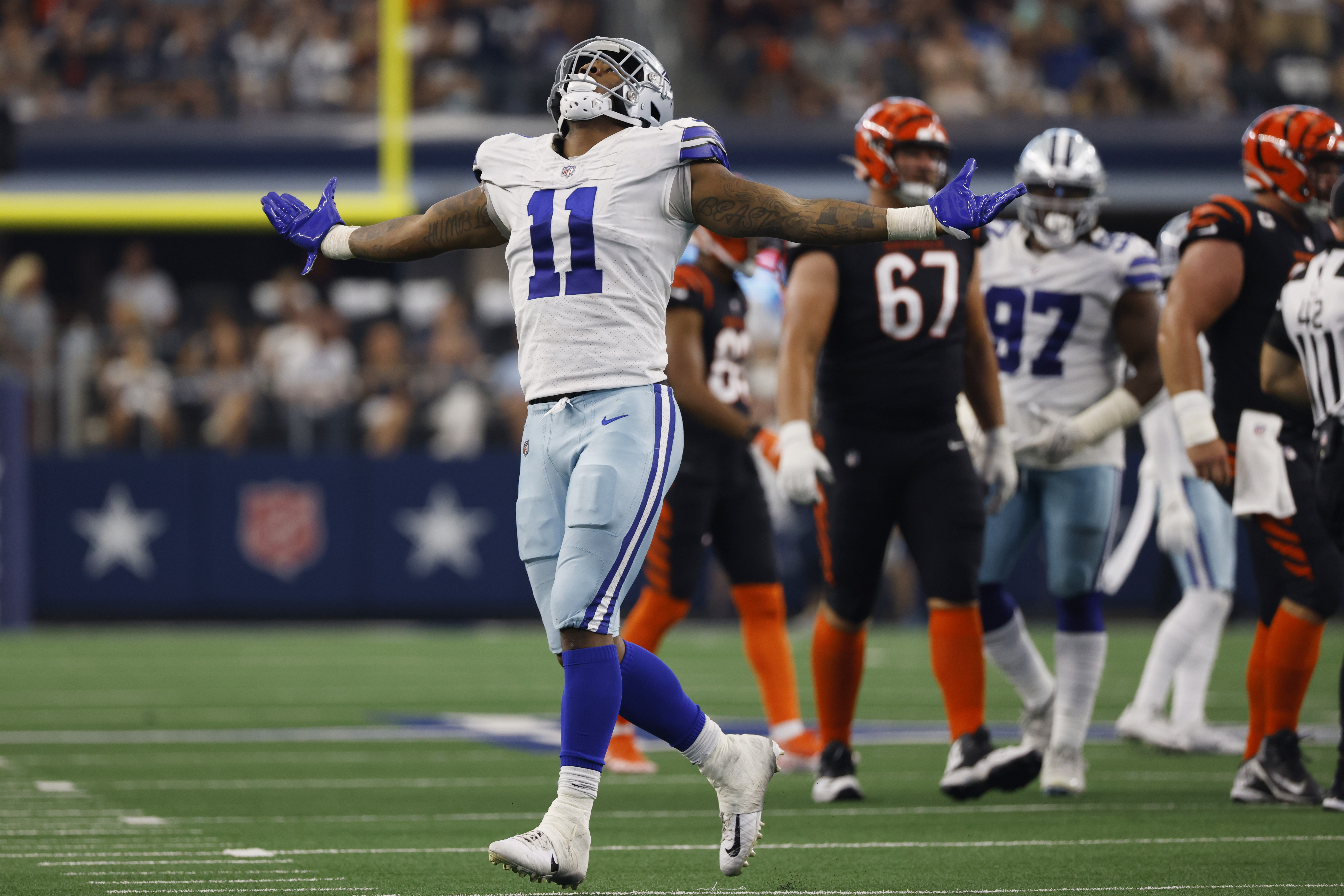