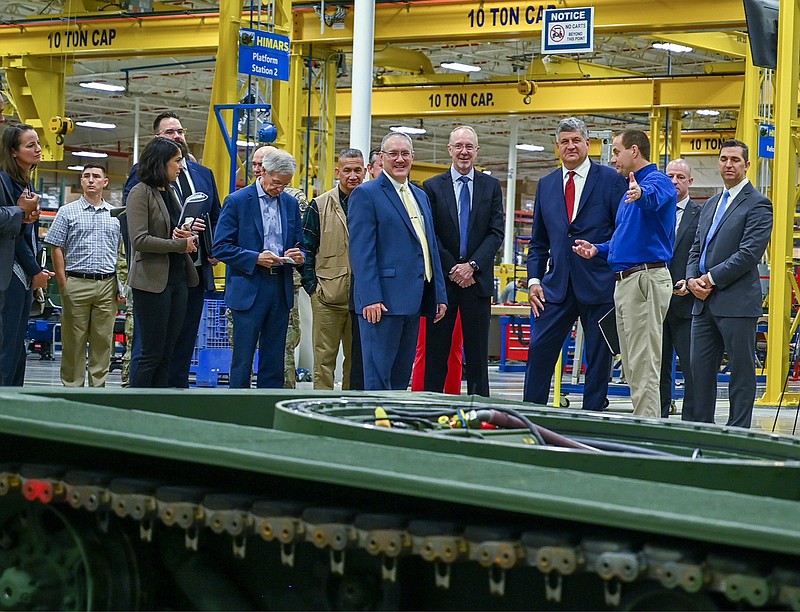 Highland's Lockheed Martin and the other major defense manufacturers located there are constructing weapons key to turning around the war in Ukraine, say military generals and other experts.

And Camden, population 10,300, is working to shore up a dwindling downtown and other amenities to maintain the area's most important industry -- the launchers, missiles and defense weapons built by 2,800 workers at Highland.

Lockheed's HIMARS (High Mobility Artillery Rocket System) made in Camden has "been key to the turnaround in Ukraine, no doubt about it," said retired U.S. Army Gen. Wesley Clark of Little Rock in an interview last week 9/14.

HIMARS serves as "a substitute for the Ukrainian Air Force," Clark said. The missiles are satellite guided with a 200-pound explosive warhead that travels about 50 miles, he said. It's accurate within about 10 feet, military experts say.

"It's a very easy-to-use system, usually mounted on a truck," Clark said. "It does what is called 'Shoot and Scoot.' It's very hard for the enemy to take out in advance. It's also able to get away after the rocket is fired."

The artillery rocket system is built only at Lockheed's installation in south Arkansas, according to Aaron Huckaby, site director of Lockheed's Camden operations.

Military leaders including Gen. Mark Milley, chairman of the Joint Chiefs of Staff, have appeared in international news reports in recent weeks applauding the HIMARS system's successes in Ukraine. HIMARS-launched missiles by last month had struck more than 400 Russian targets, according to the U.S. Department of Defense.

The attention has spilled over to HIMARS' builders in Arkansas and Camden as its city of origin.

A CBS "Sunday Morning" broadcast Sept. 4 talked about the weapon's production in rural south Arkansas. Politico, a politics and policy news website, on Sept. 9 examined Camden and Highland Industrial Park in a magazine-length article, "The Struggling Arkansas Town That Helped Stop Russia in Its Tracks."

"We have received nearly $400 million to replenish HIMARS and GMLRS" in defense department stockpiles, LaPlante said, according to a Camden News newspaper report. "In addition, we are planning nearly $200 million to expand and accelerate production..."

LaPlante and Bush also thanked Lockheed workers for the "impact their efforts are having on the battlefield" in Ukraine.

When Ramona Crain, a real estate agent in Camden, read the Politico article, she was "very pleased" at the attention for the Camden area and its defense contractor industry.

"I had known by hearing around town that some of the industries were producing weapons for the fight in Ukraine," she said. "I am proud of their contribution. Many hard-working individuals are contributing to the success of these plants."

Still, Crain was surprised in some ways at all the recognition. The defense manufacturers don't get talked about a lot in Camden, she said. And someone driving through the city wouldn't necessarily know the giant installation is a few miles outside.

"They're like a quiet group of defense industries that are doing a good job," she said.

OUT OF THE CONVERSATION

Travel northeast from Camden on U.S. 79 Business, cross the Ouachita River and rural countryside and -- at about East Camden, population 798 -- turn onto U.S. 278, then Arkansas 274 to motor into Highland Industrial Park's 18,780 acres.

At the entrance, pass a hulking orange-and-tan billboard advertising the industrial park's 25-plus tenants.

A white-and-blue Lockheed building sits alongside the billboard, across from the Highland Industrial Park administrative building.

His company, which occupies more than 2,000 acres at Highland, has built more than 550 HIMARS, "from ground up -- truck, chassis, launcher that can fire various munitions," he said. "Some other sub-components are produced by our supply base. We have a number of suppliers across Arkansas and the nation."

Huckaby said he, like many employers, worries about workforce development and retention. He wants to be more creative in identifying skilled and diverse talent while attracting and retaining the best.

Like many other companies at Highland Park, Lockheed works four 10-hour days Monday through Thursday, unless overtime is required. That helps workers who drive in from El Dorado, Hot Springs, Arkadelphia and other areas to work at the plants.

Pay and benefits are a big attraction.

Lockheed, ranked the nation's largest defense contractor, describes its pay only as "competitive and fair." Camden business leaders guess the lowest starting salary at $15 per hour, with pay for engineers and other senior and highly trained staff climbing into "six figures."

In addition to health insurance and a retirement plan, Lockheed awards tuition assistance of $7,500 to $12,500 per year and up to four weeks of paid maternity and paternity leave, according to a company spokesman.

Huckaby would like to see the Camden area offer workers better quality day care, schools, housing and other amenities, which are issues his employees talk about "on an ongoing basis."

When he meets with state business and government leaders, he sees "a lot of momentum" around growth in Northwest Arkansas and the Little Rock-Central Arkansas area. "I think South Arkansas is missing from that conversation in a lot of ways," he said.

Still, Lockheed Camden has "a healthy business and a healthy backlog," Huckaby said. The company in June, 2019 announced a $142 million investment in its Camden operation.

Defense contractors Lockheed, Aerojet and others have built defense department weapons near Camden for decades.

World-War-II era buildings still huddle close to high-tech factories. The site contains about 640 earth-covered munitions storage bunkers from its military days, according to industrial park officials. They're handy for use by missile manufacturers.

After the Navy's Shumaker Naval Ammunition Depot shut down in the late 1950s, the Brown family of Texas bought 25,000 acres, Schaffitzel said. Highland Resources Inc., a subsidiary of Brown Engineering, has operated the industrial park since 1968, he said.

Years ago, Camden residents say, it wasn't too difficult to get inside the defense industries at Highland Industrial Park if they had business there. But stepped-up security has made access more difficult. Lockheed and Aerojet declined Arkansas Democrat-Gazette requests to come inside their plants.

Lockheed and Aerojet are the largest tenants, each with more than 1,000 employees, according to company spokesmen.

Aerojet's Camden operation, on almost 2,000 acres, produces 75,000 solid rocket motors a year to power defense systems including the Javelin, Stinger, Patriot Missile and other missile defense and tactical systems, according to a company spokeswoman.

The Arkansas Economic Development Commission lists aerospace and aviation, which includes defense industries, as Arkansas' No. 1 export. The commission's website also describes Highland as one of the nation's "fastest growing defense corridors."

But unlike Walmart, Tyson Foods, JB Hunt Trucking and Dillard's, Highland Industrial Park is hardly a familiar name across the state.

Asked how well-known is the Camden-area installation that builds launchers, missiles and other military weapons, Schaffitzel, who has been on his job almost a year, said he isn't sure.

"Is it highly known?" he said. "I don't know that they [defense contractors] want it to be highly known."

Decorative banners in downtown Camden recall the days of steamboats on the Quachita River.

Nearby, a new mural on a renovated apartment building shouts rockets, missiles and defense workers.

Camden, settled in the early 1800s, was a paper mill town for decades until International Paper Co. closed here in 2001. Now, residents say, it's a city that "builds bombs."

By all accounts, the Camden area struggles with the same problems of other communities in the rural South and Midwest: declining population, worries about access to education opportunities, good-paying jobs, medical care, amenities.

Camden's defense workers are "very important to the economy. They're transferring in, buying homes, settling in, helping us build our community," said Tammy George, principal broker at Century 21 Campbell & Company.

She sees "recent development and improvements in our downtown area, new retail and restaurants. We're really pleased to see some growth."

Still, she doesn't know of any new homes currently under construction. And she remembers Camden in the 1970s, nearly 50% larger with a population of about 15,000, boasting stores such as Watts, J.C. Penney, Montgomery Ward, Bealls and Gibson's that are gone now.

Lockheed's Huckaby said Camden's evolution may look better to those who have moved in more recently. The past 10 years have shown "increases in the amenities and downtown," residents tell him.

Highland Park's Schaffitzel said he pitches quality of life in the river city.

"The energy in downtown Camden is pretty amazing," he said. "They have First Friday events that draw 2,000 or 3,000 out in the streets." He points to new restaurants like the Postmasters Grill in an historic, renovated post office building.

Jim Golden, who owns Jim Golden Ford in Camden, counts on business from the defense companies and their workers. He also sees deeper inside the local military weapons industry than most residents, as president of the Ouachita Partnership for Economic Development board.

In Golden's view, "the economy is fantastic in Camden right now, due to the influx of aerospace jobs. It is very, very good for Camden and very, very good for this business. A lot of people work out there, they buy vehicles from me, I service their vehicles."

"If it wasn't for these industrial plants, this Ford place probably wouldn't be here," he said. "Or if it was, it would be very small."

Silliman, Camden Area Industrial Development Corporation's executive director, believes the area's military weapons builders are "in a boom mode. The companies are all busy right now and have been. I can only speculate that a lot of the inventories will be replenished. It sounds like there's going to be steady production for a while," he said.

Meanwhile, attention on Camden's defense weapons industry and the city itself is mostly encouraging, said many interviewed.

Gen. Clark, whose family moved to Little Rock from Chicago when he was a child, said defense industries chose Camden and Arkansas for good reasons.

After defense contractors were forced to shrink their operations at the end of the Cold War, "these companies decided where the best places were to concentrate their manufacturing. Camden fit the bill, based on high-quality workforce and low cost," he said.

"This is representative of the best of Arkansas," Clark said. "We have a lot of high-quality people here. They're stable, love their families, work hard and pay attention to what they're doing."

Ford dealership owner Golden says that when foreign governments say they're grateful to Arkansas for life-saving weapons produced at Camden, he's "really proud" of where he lives.

Defense plant workers and other area residents "realize they're doing something special," Golden said. "They do."