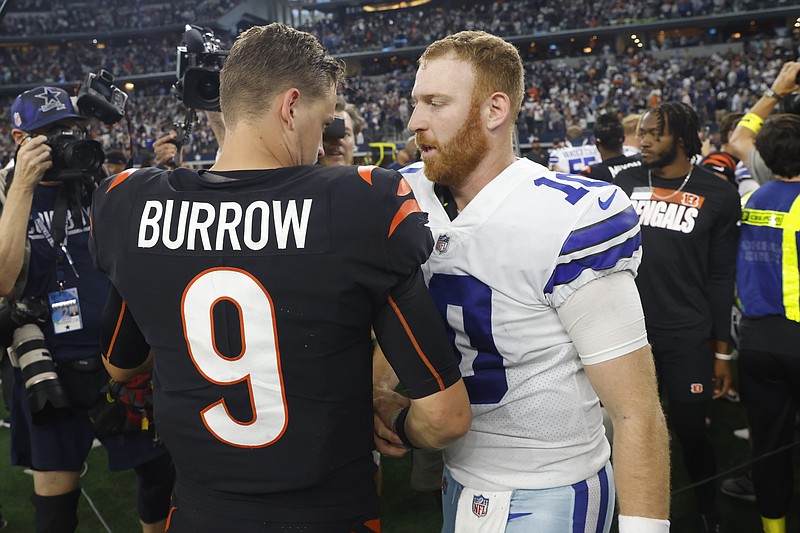 FRISCO, Texas (AP) -- Dallas coach Mike McCarthy went for it on fourth down from his territory on Cooper Rush's first series filling in again for injured star quarterback Dak Prescott.

The Cowboys converted, beat Cincinnati when few thought they would after a poor offensive showing in a season-opening loss and might have made it considerably easier to navigate their path without Prescott, however long it is.

"I hope they see that with me every time I get in front of them, every time I interact with them," McCarthy said when asked if he was seeking a boost of confidence for a team shaken by the opener. "I don't want to be taking crazy risks and so forth. It's not worth it most of the time. I just like the way we started. It was a very easy decision."

Noah Brown caught Rush's 17-yard pass on fourth-and-2 from the Dallas 44, leading to Brown's his first career touchdown on a 9-yard toss in the best game of his six-year career.

The Cowboys went 75 yards for TDs on their first two possessions of a 20-17 victory over the defending AFC champion Bengals after being the only NFL team not to get in the end zone on opening weekend, losing to Tampa Bay 19-3.

Rush struggled to keep the offense moving after that in the first of what could be several starts while Prescott recovers from a fracture near the thumb of his right hand.

Dallas needed about 30 yards in the final minute to get in field goal range after a huge stop by the defense when Joe Burrow and the Bengals had offensive momentum for the first time.

Rush got them that and a few more -- with a big boost from another catch by Brown.

Brett Maher kicked a 50-yarder as time expired, making Rush the first Dallas QB to lead game-winning drives in his first two starts. The first was at Minnesota last year when Prescott was sidelined by a calf strain.

"It's just a testament to all of the work we put in, in the facility," said Brown, who had a career-high 91 yards receiving. "Not a lot of people get to see Cooper, or me in the past really. But the work showed today."

Rush filled in just once last year when Prescott had a calf strain. The Cowboys know it will be more than that this time.

Executive vice president of personnel Stephen Jones suggested Prescott could be back as early as Week 4, but a Week 5 visit to the defending Super Bowl champion Los Angeles Rams seems more realistic.

"We weren't going to rush Dak back," owner Jones said. "The nature of Dak's repair allows him to play when he can grip the ball. And that's not rushing him back. If he can't grip the ball, he'd be the first to tell you he doesn't want to play."

Defensive coordinator Dan Quinn's unit has allowed one touchdown apiece to offenses led by Tom Brady and Burrow in the first two weeks. The six sacks of Burrow were the most for the Cowboys since 2018 against the New York Giants. Dallas limited Joe Mixon to 3 yards per carry a week after Leonard Fournette averaged 6.

While the Cowboys reduced their penalties by half against the Bengals with five, two kept alive Cincinnati drives to field goals. LB Anthony Barr put an unnecessary hit on Burrow as he was going down, and rookie LB Devin Harper had an explicable offsides call on a punt.

RB Tony Pollard averaged 7.5 yards on 13 touches, keyed by a 46-yard play that went down as a pass when he took a shovel pass from Rush behind the line of scrimmage to within inches of the goal line. The play was ruled a touchdown before getting overturned on review. He scored on the next play. He had 43 yards on nine carries (4.8 average).

The Cowboys are tied with Arizona for the worst third-down conversion rate at 24% through two weeks. Dallas was 3 of 10 against the Bengals after going 3 of 15 against the Buccaneers.

TE Dalton Schultz didn't play the final series after appearing to injure his right knee late in the fourth quarter. ... WR CeeDee Lamb appeared to play through lower leg discomfort after one of his legs bent awkwardly on a tackle in the first half. "I'm not leaving this field. They're going to have to carry me off this field in order for me to get off. That's what was going through my head," Lamb said.

17 -- Reigning NFL Defensive Rookie of the Year Micah Parsons has two sacks in each of the first two games, giving him 17 in 18 games for his career. That's the most in NFL history for a player's first 18 games since sacks became official in 1982.

Rush is set for his first start against an NFC East opponent for the defending division champs. Dallas is at the New York Giants next Monday night. Logic says Rush will start again back home against another division foe, Washington, on Oct. 2. 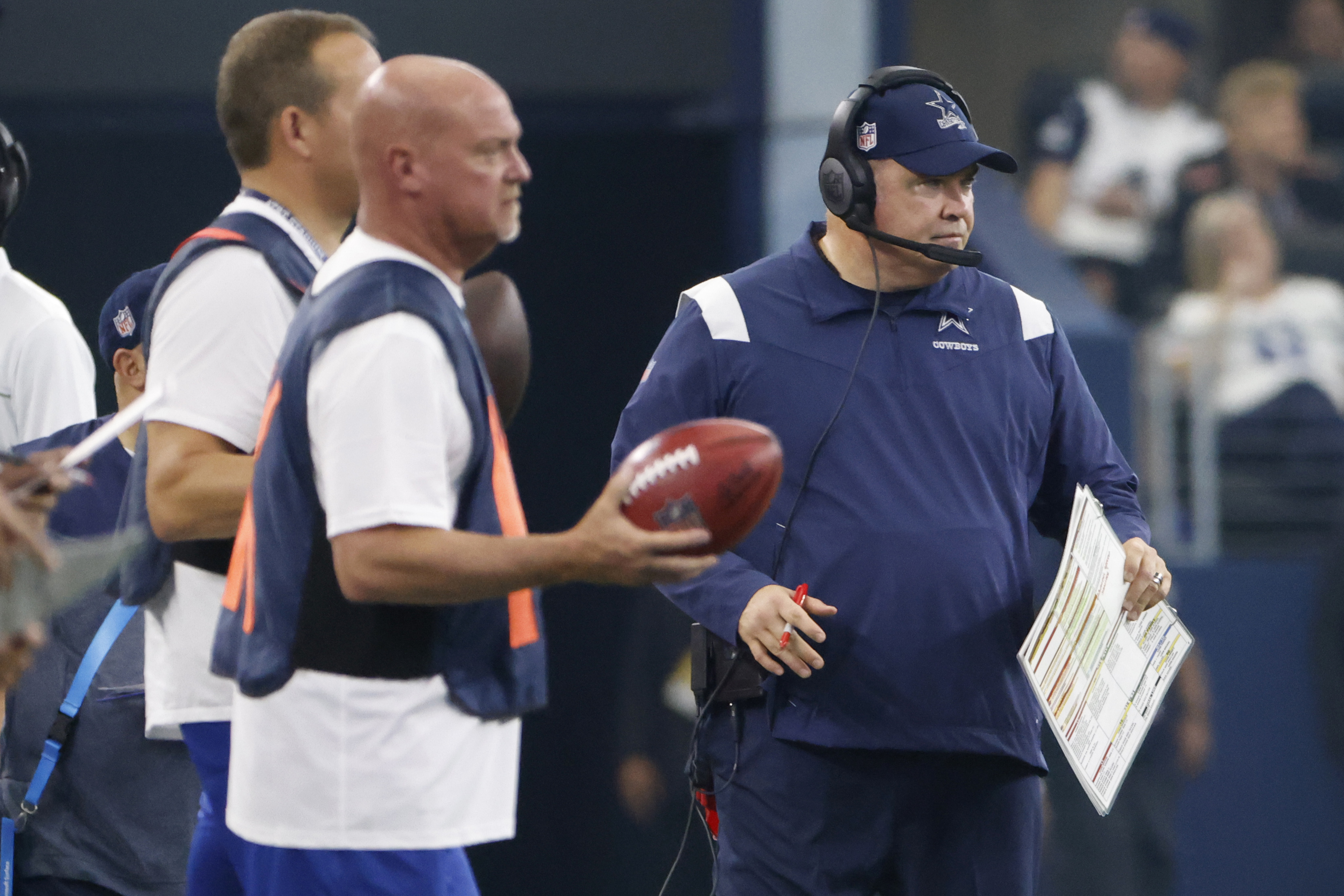 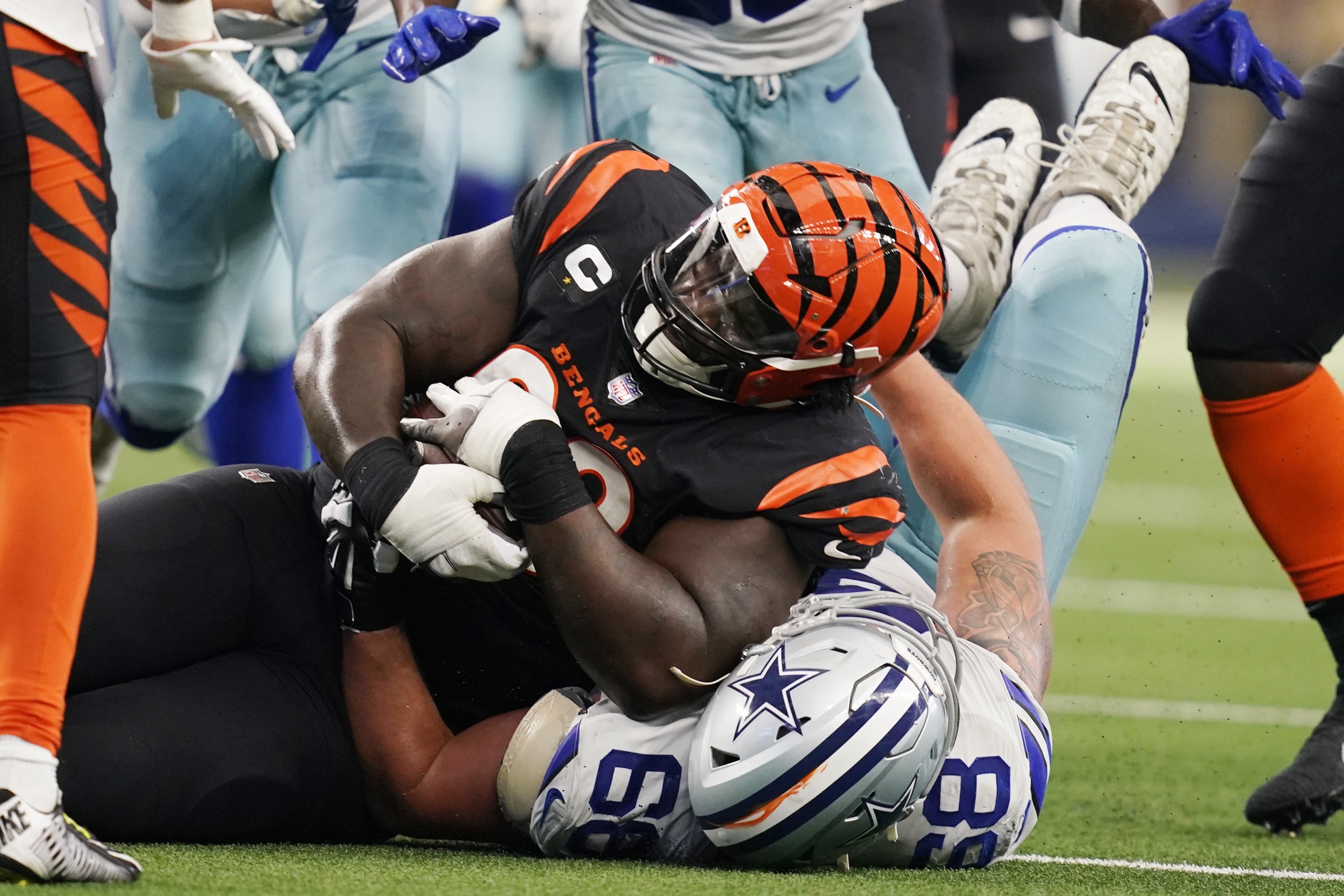 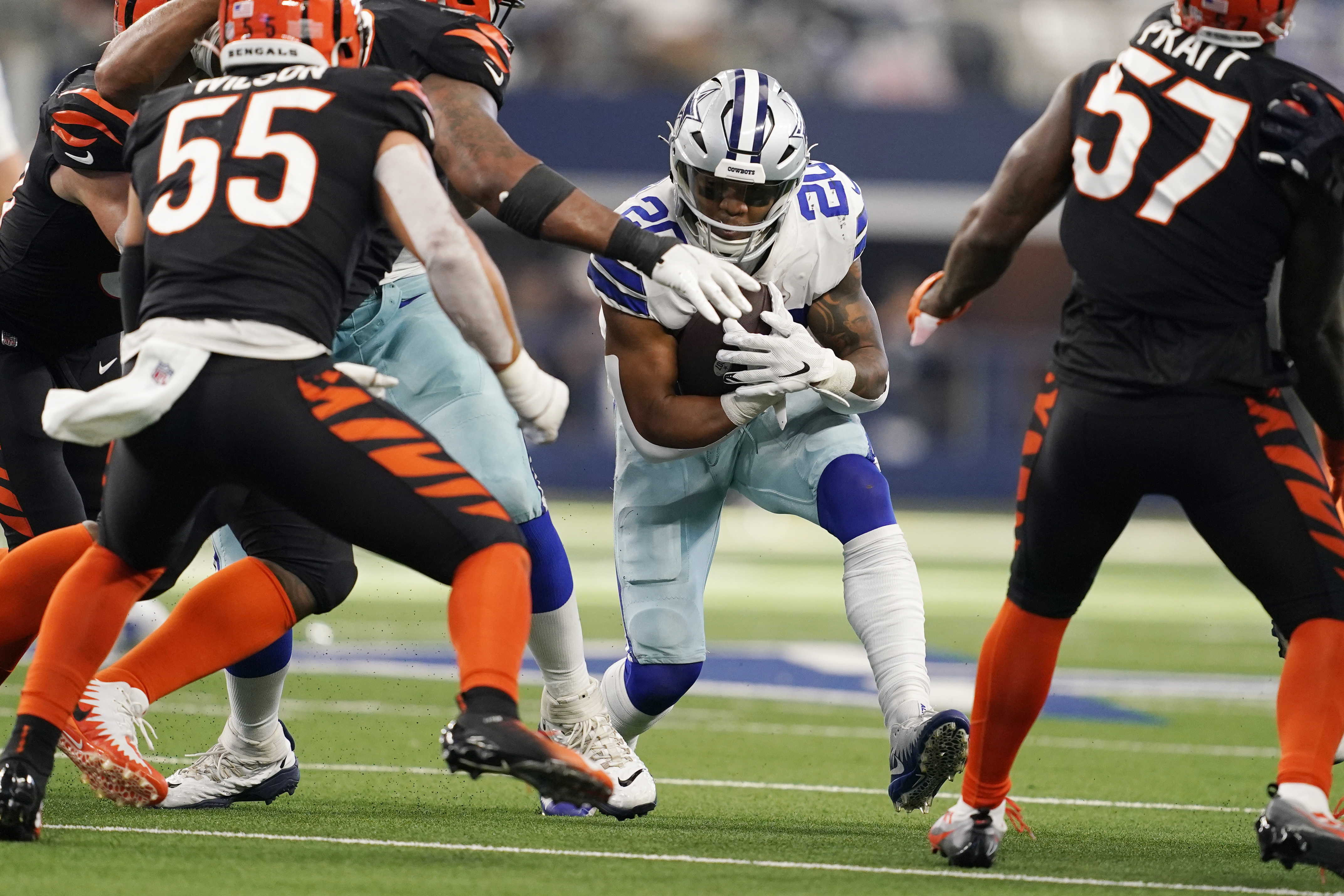 Dallas Cowboys running back Tony Pollard (20) looks for a hole as Cincinnati Bengals linebacker Logan Wilson (55) closes in during the second half of an NFL football game Sunday, Sept. 18, 2022, in Arlington, Tx. (AP Photo/Tony Gutierrez) 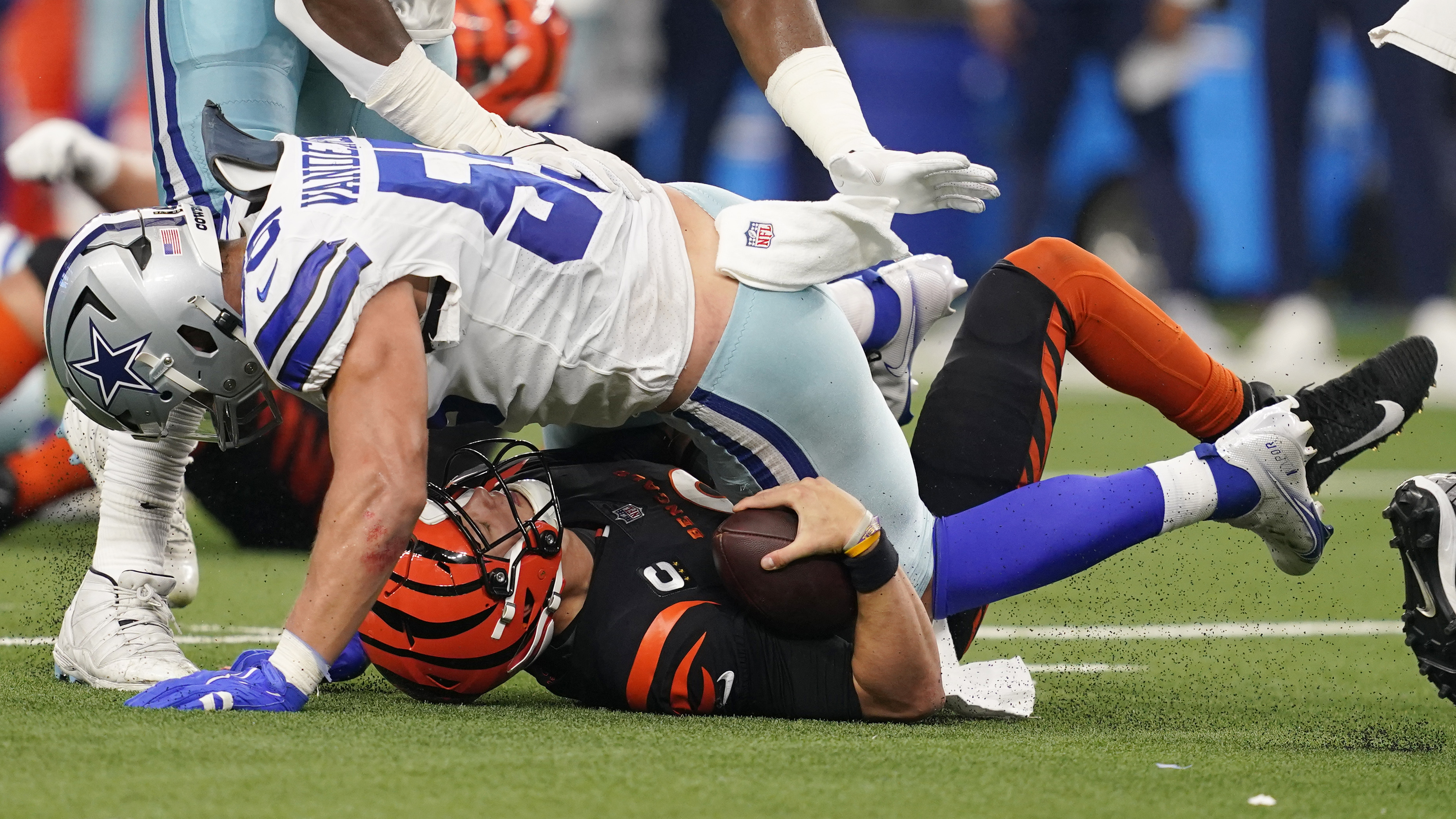 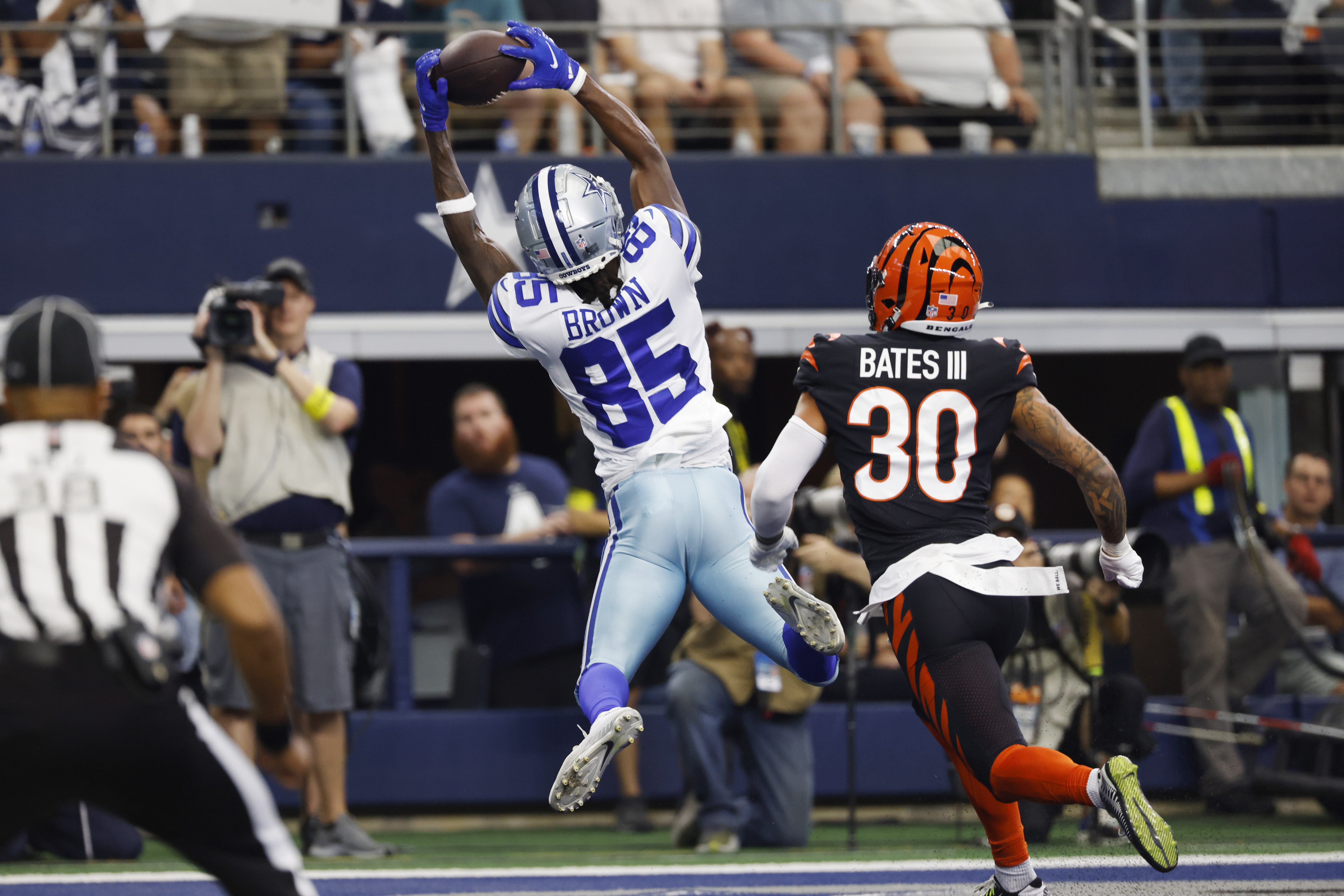