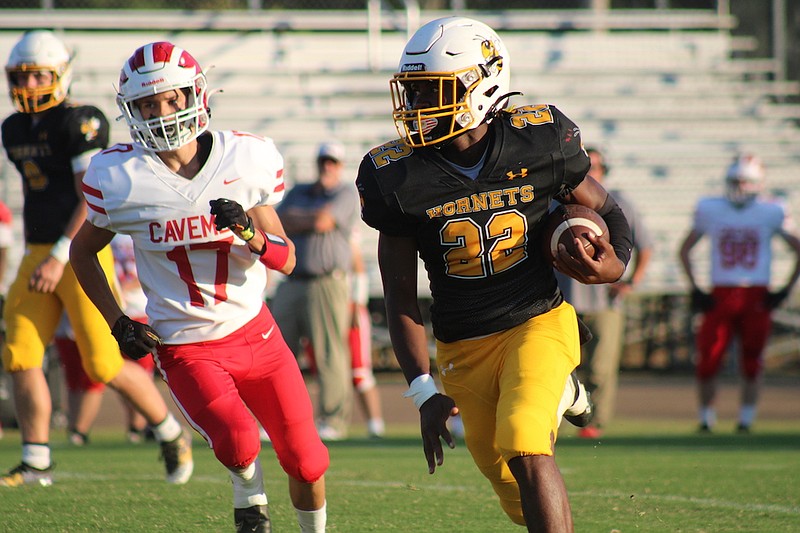 Photo By: Michael Hanich Harmony Grove running back Damariyon Billingly runs for a big play in the game against Cave City.

The Harmony Grove Hornets got their second win of the 2022 season thanks to a collective effort from the entire team.

The Hornets dominated the Cave City Cavemen 54-14 at home last Friday in a game where they scored on every offensive possession. On the defensive side of the ball, the Hornets stalled a talented Cavemen offense to only 255 total yards.

Offensively, Harmony Grove found a great rhythm through the running and passing game. The Hornets accumulated 403 total yards, with 253 coming from the rushing game.

Defensively, the Hornets had several great moments as they forced mistakes such as turnovers and forced punts. The defensive line, linebackers and secondary all had great performances against the offense of Cave City. Among one of the most notable defenders that made his presence known from start to finish was sophomore defensive tackle Peyton Ross.

Billingly has been one of the Hornets' top rushers since the beginning of the 2022 season. Friday night against the Cavemen was one of the best performances in his young career. Billingly rushed for three touchdowns, including two coming from more than 20 yards.

His first score came from a 22-yard run after an initial run on 20-yards in the first drive of the game for Harmony Grove. In the fourth drive of the game for the Hornets, Billingly had four runs for 18 yards and he finished the drive with a two-yard run. One drive later for the Hornets, Billingly took a run of 28 yards for a touchdown to help put his team up 35-7 in the middle of the second quarter.

The defense of the Hornets has talent throughout the field and has more to spare with depth. There were many new players that came in as new starters and made an immediate impact. Among the new starters to the Hornets' defense is Peyton Ross, who is the huge, athletic behemoth in the middle of the defensive line.

From the start of the season, Ross has been a consistent and reliable defender for Harmony Grove. He is a defensive lineman that is able to crowd the line of scrimmage and use his motor to push into the opposing offense's backfield. For a player his size, he has great conditioning, motor and incredible athleticism.

In the game against Cave City, Ross accounted for two total tackles, one tackle for loss and a fumble recovery that was returned for significant yardage. That fumble recovery helped set up a five-play, 43-yard scoring drive for Harmony Grove. 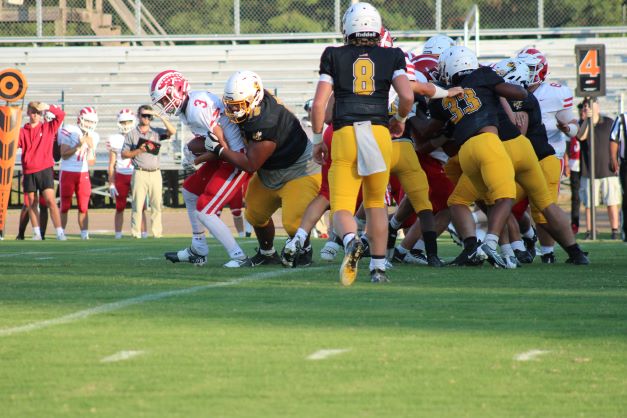