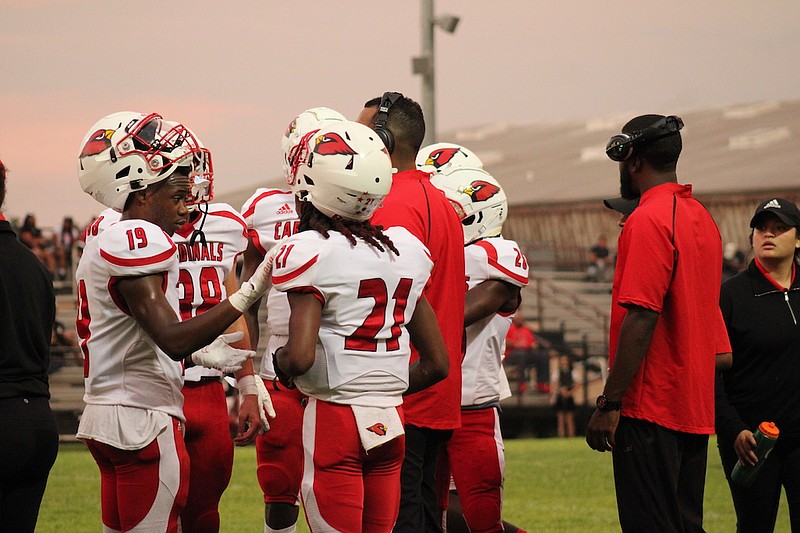 Photo By: Michael Hanich The defensive backs of Camden Fairview huddle after a time out in the game against Dollarway.

The Camden Fairview Cardinals (2-1) are feeling good about their chances towards the goals of a championship season after coming off a bye-week. The last time the Cardinals took the field was in the 48-0 dominating win over the Dollarway Cardinals where the game was called for lightning. Each position showed and had one of their best performance in short sequences.

One position group that found themselves challenged was the secondary of Camden Fairview. In the final drive for Dollarway, the secondary found themselves giving up easy passing plays from short-to-mid-range yardage. This allowed Dollarway to cross mid-field and contend for an efficient drive. The drive ended with the clock winding down before getting into the redzone.

This past week's bye-week was a good chance for each player to recover and get their body fully healed from potential nagging injuries. It was also a chance for each position group to get together and learn from their mistakes through the first three games of the season.

The secondary for Camden Fairview used this bye-week to study film on the upcoming game at home against the Lakeside Rams, but mostly on themselves. The secondary also used the bye-week to address any issues in potential deep coverages that hurt them in the beginning of the year and quickly recognizing short-to-mid-range schemes. This is a secondary that has the speed and play making abilities to lock down high-caliber passing offenses.

This week, the defense of the Cardinals are switching different roles for each of their main defensive backs. Senior safety Arquavion Martin has been playing a little man-coverage cornerback to get more comfortable with man coverage schemes. Junior cornerback Takorey McCoy has been getting more reps at the one-high safety to familiarize himself with zone coverage schemes and to provide more support in deep passing situations. McCoy is one of the tallest defensive backs for the Cardinals, along with Jabauree Lockhart.

There is no doubt that Lockhart is still the heart and soul of the defensive backs, and likely the entire defense. His role for Camden Fairview's defense is limitless as he plays slot cornerback, an extra safety in deep passing schemes, plays close to the line of scrimmage as a third linebacker to provide the rush defense, or even play outside man coverage corner.